The Evangelical Women We Don’t Know—and Need to Know 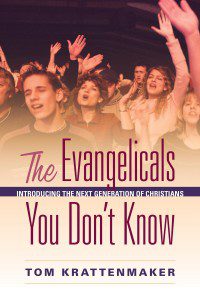 Only one of the individuals mentioned in that list is a woman, who is also a person of non-Anglo heritage, my friend and colleague, Lisa Sharon Harper. My statement is not intended as a criticism of Krattenmaker’s article. Rather, I intend to build on this point by highlighting that the article is suggestive of what stands out in Evangelical circles and is structurally symbolic of the movement even at this time.

Many of the people and projects described in this book fit, roughly, a category you might call the “new evangelicals.” That is a term you’ll see often on the pages that follow, mixed in with variations like “new-century evangelicals” and “new-paradigm evangelicals.” Who are they?

Part of the answer is that the characters in this book are generally Caucasian.  Not to deny black churches the attention and credit (and criticism) they warrant, and not to imply that African American, Latino, and other non-white evangelicals are not participating in the course corrections necessitated by the changing times. But the transformations and correctives described in this book are generally seen in the ranks of white evangelicalism, a tradition that has largely been distinct (and, sadly, separate) from the black Protestant experience in America and that finds itself today with distinct challenges and imperatives for change.

In addition to being white, the new evangelicals chronicled in this book are generally, but not exclusively, young adults and adults in early middle age. Sharp-eyed readers will notice, too, that a disproportionate number of the central figures of this book are male. This parallels an unfortunate reality about this new evangelicalism (and the old one, too)—namely, the movement is largely led by men. By showcasing several women in the coming chapters, I hope to encourage more to step forward, and more men to accept their leadership.

In this spirit, Krattenmaker goes on to give prominent, chapter-heading roles to Lisa Sharon Harper, Julie Clawson, and Stephanie Tama-Sweet. Others who stand out to me and who need to receive consideration in future works include Andrea Smith, Mae Elise Cannon, Sandra Van Opstal, Mimi Haddad, and Carolyn Custis James. The list could and should go on, so please add more!

I have mentioned previously in my writing that my wife, Mariko, a native of Japan, has encouraged me and white, male Christian leaders like myself to share the microphone with others so that the body of Christ can become more well-rounded and whole. One area where such sharing of the microphone needs to occur increasingly is at Christian conferences. My friend and colleague, Soong-Chan Rah, recently spoke about how monolithic many Christian conferences are in terms of the diversity—actually the lack thereof—of keynote presenters. Of course, white male Christian leaders have something vital to contribute to the ongoing conversations around the church, the gospel, and the Christian life. Given the makeup of numerous conference speaker lists, it almost goes without saying that white, male Christian leaders are viewed as having something vital to contribute. What needs to be stated in increasing measure is that we need to hear from a greater variety of diverse perspectives and voices, including especially women and men of non-Euro-American ethnic heritages, so that our appreciation and understanding as Evangelicals of the church, the gospel and the Christian life can become more well-rounded and expansive.

As we Evangelicals get to know and hear from an expansive number of Evangelical leaders who are women and men of diverse ethnic backgrounds here in North America and across the globe, we will come to know better who we as a movement are and what the gospel of the kingdom entails for us in our day.