Humanize Religion: A Seminary Class Discussion with a Pagan and a Former Druid

Pagan leader Jason Pitzl-Waters spoke in my world religions class yesterday. Jason is perhaps best known for his blog, The Wild Hunt: A Modern Pagan Perspective. Jason travels from Eugene to Portland (not a short ride) to put a human face on Paganism for my students. One of the things he asks himself is: “If I don’t come and speak, who will the Christian seminary professor bring in as a guest speaker?” He shared his internal musings with my class and put the matter in context so that we could appreciate the question. If Christianity were a minority faith tradition that is often maligned, would we Christians feel comfortable if the media pulled anyone off the street who acknowledged they were Christian and interview them as an expert on Christianity? In his effort to humanize Paganism, Jason asked my class to see Pagans as one of those groups of spiritual people we Evangelical Christians want to convert, not as a bunch of Satan worshipers. He added, “The better you understand us the better your outreach. Caricatures will never lead to connection with Pagans. Having actual human moments with people of other faiths leads to empathy.” In my estimation, if we don’t humanize religion, we may very well end up demonizing the adherents of other paths.

Yesterday, my class had opportunity to share human moments with two people with Pagan stories. Jason, who is a Wiccan, brought with him someone from a Druid background by the name of Teo Bishop. Teo lives here in Portland and has been in the news quite a lot lately given his movement toward Christianity. Teo blogs at Bishop in the Grove and is currently on the cover of Witches and Pagans because of his recent migration back to Christianity—the religion of his youth. He has found the intensified interest quite challenging. I can only imagine how challenging it is since, by his own admission, he is simply trying to learn what it means to follow Jesus. How simple, yet so complex. Kind of like Teo. Kind of like the rest of us. Teo does not fit stereotypes. Who does?

Teo is not a paper-thin caricature, nor is Jason, nor are you and me. Jason brought Teo to class today to complexify the discourse. From the vantage point of Jason’s Pagan tribe, it might not be seen as advantageous, he acknowledged. Many Pagans feel like Christianity scored another point in Teo’s turn. But it was more important to Jason to complexify rather than score points or keep points from being scored against this or that religious tradition or spiritual path. Jason’s genuineness and honesty always speak volumes to me. I hope I would be simple enough to complexify multi-faith discourse whenever possible.

Toward the end of his talk, Jason encouraged my class to approach people of different paths as people, not members of enemy armies. How novel. It sounds simple, but it’s not so easy. Land mines from past religious culture wars cover the path. Still, we need to be willing to risk and move past our fears and push forward even though adherents of our respective teams, tribes and armies may excommunicate us simply because we choose to communicate face to face with fellow humans of different paths.

I am grateful for Jason’s willingness to risk, as well as Teo’s. Together with the students in my class, they put human faces on religion and spirituality yesterday. No points were scored during or after class, but hopefully greater trust was built. We’ll need such trust if we ever hope to diffuse the religious war bombs that deface us all.

November 18, 2013
Trustworthy Rivals: On an Alternative Path to Multi-Faith Discourse
Next Post 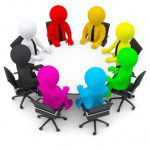