How Can the Church Guard against a Fortress Mentality? 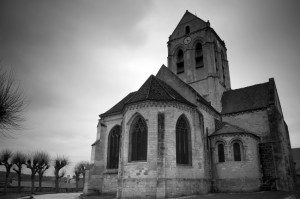 How can the church guard against a fortress mentality that closes the door to the surrounding community? It’s not so easy to be missional. It’s much easier to close ourselves off from the world, where the church ends up looking like Vincent Van Gogh’s painting of the Church at Auvers.

Why do I refer to Van Gogh’s art piece in this context? If you take a look at the painting of the church, you’ll find that there’s no door showing. The peasant woman walking toward the church is straddling the far edge of the path. The windows are darkened. It’s not a very inviting place.

I wonder how inviting Jesus’ synagogue in Nazareth was to Gentiles. In Luke 4, we find Jesus returning to the synagogue of his youth after his temptation in the wilderness followed by the beginning of his public ministry (Luke 4:1-15). At first, his townspeople in the synagogue marvel at his words, just as people do in the other synagogues in the region (Luke 4:22; cf. Luke 4:15). However, his townspeople quickly take issue with Jesus, who takes issue with them. Jesus challenges his fellow synagogue-goers because they stumble over his being Joseph’s son (Luke 4:22). Jesus tells them that no prophet is accepted in his hometown (Luke 4:24). As a result of their doubts, Jesus suggests that he will not perform miracles in their midst. Rather, Jesus implies that he will perform wonders among the Gentiles, just like Elijah and Elisha did (Luke 4:25-27). Jesus’ fellow synagogue-goers respond in rage and take him outside and try to throw him off a cliff; however, Jesus miraculously walks away (Luke 4:28-30). Their hostility is the result of Jesus’ claim that Gentiles will be the beneficiaries of his prophetic, Spirit-filled work, not God’s chosen people.

We Gentile church-goers who confess Jesus often have the same kind of hubris. As a result, our churches are not very inviting. It is very difficult for us to think that Jesus might work outside our church walls in unorthodox or non-kosher contexts, and in part because of our own hardness of heart toward him. We tend to put Jesus in a box, just as his fellow Jewish townspeople did. After all, we think we are entitled to his favor because we have “members only” status.

Those of us whose ancestors worshipped in the same congregation, those of us who give large sums of money, those of us who are biblically and/or ethically sound all tend to assume at times that we own Jesus and that he owes us. We don’t own him and he doesn’t owe us anything. However, we can be confident that Jesus will be merciful toward us famine-raged and leprous souls, when we cry out to him in desperation. Like his Father, Jesus will never despise a broken and contrite spirit, only those who have built fortresses around their souls to keep him in or out, as the case may be. The church can only guard against a fortress mentality if it breaks down the strongholds of pride and presumption and remains open to Jesus. Repentance is the missing key.

Martin Luther opened his Ninety-Five Theses with these words:  “When our Lord and Master Jesus Christ said, `Repent’ (Mt 4:17), he willed the entire life of believers to be one of repentance.” Only as Germans in Wittenberg and Jews in Nazareth, Americans in Portland and the French in Auvers pound the first of the ninety-five theses to the doors of their own castle churches (like Luther reportedly did) will Gentiles and peasant women feel welcome to enter. Humility, not hubris, opens church doors and keeps them open.