Grateful for the Dead 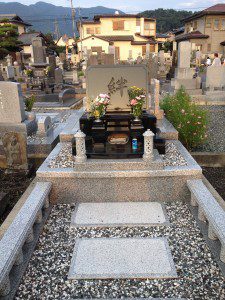 Editors’ Note: This article is part of the Public Square on Remembering Our Dead: Ancestors, Rituals, Relics. Read other perspectives from the Patheos community here.

Are you grateful for the dead—any dead? One of the major holidays in Japan is Obon or Bon. The holiday celebration centers on honoring one’s ancestors who are believed to return home during the celebration in mid-August of every year.

People in Japan don’t walk away from the dead. There is a living bond or connection. The picture to the left was taken during Obon in August of this year. The Japanese word on the grave stone (“kizuna”) means “connection” as in an unbreakable bond by blood. If you look carefully, you can see a man and his daughter in the background at the graveyard tending to the grave of a family member as a sign of respect. The same kind of respect is shown at the butsudan or family altar in many Japanese Buddhist homes where individual families honor their deceased ancestors on a daily basis.

In my limited experience, Christians in Japan have often found it extremely difficult to show appreciation for Obon or the butsudan. Many Christians view such remembrance as worship of the dead. I know of one situation where a man who became a Christian destroyed the family altar or butsudan. No doubt, for him it was an idol. No doubt, for many of his Japanese neighbors, this action signified extreme dishonor, perhaps even destruction, of his ancestors.

Is it always the case that Japanese people worship the dead, or could regular remembrance simply be a form of honor and gratitude for the deceased? In answer to the latter question, one conservative Evangelical Brethren church in Japan with which I am familiar connects with their community by holding remembrance (not worship) services. They invite community members to come and express gratitude for deceased loved ones.

Again, is it always the case that Japanese people worship the dead? A former Buddhist priest, who is now a Christian pastor (Matsuoka Hirokazu), claims that Japanese hearts are not toward Buddha, but dead ancestors, in their approach to the deceased. In his estimation, they are remembering and appreciating their loved ones who have passed away. He states that their mindset is not much different than that of those who participate in memorial or remembrance services held by some churches in Japan. It is not worship or a form of idolatry (See page 151 of Forest Books’ Japanese edition of The Buddhist Priest Who Met Jesus; there is now an English edition of the work titled Buddhist Priest Meets Jesus).

I believe it is very difficult for many people from the West to appreciate the connection many Japanese feel with their ancestors. All too often in the West, we walk away from the dead. At times, it is as if they are out of sight and therefore out of mind. The same goes for many American Christians as it pertains to church history. It is almost as if the church began the day they became Christians. Thankfully, this is not always the case. Take for example my friends at a local Orthodox church in Portland (and those like it), where pictures of saints who lived long ago hang from the walls in the church to signify that somehow the great cloud of witnesses mentioned in Hebrews 12:1 is present.

While Christians must not worship their dead ancestors in the faith, we do worship Jesus who died and who rose again to eternal life. It is also important to our faith to recount the hall of fame of faith (See Hebrews 11). Such remembrance energizes us: we are not alone.

Just as we are not alone, we would not be here without them. As in the case of the significance of remembering deceased ancestors in the Christian faith like St. Paul, Polycarp, Irenaeus of Lyons, Augustine of Hippo, Dietrich Bonhoeffer, Martin Luther King, Jr. and some of my own personal theological mentors like Kenneth Kantzer and Colin Gunton, I think it is also important to recount with gratitude the faithfulness of one’s biological parents and ancestors who made it possible for us to be here today. Where would we be without them? Where would I be without my Christian father and my Japanese father-in-law who passed away not so long ago? There is a vital sense in which they live on through me. The same goes for friends who have since departed. There is a vital sense in which my late friend, Kyogen Carlson, a Buddhist priest, lives on through me, just as a part of me died with him (Click here to see my recent blog post in his honor). Where would I be without them?

Can we really live well on life’s long journey if we lack gratitude for those who have paved the way for us, even to the point of death? There is nothing morbid about remembrance with gratitude. Such remembrance is actually quite life-giving. Are you grateful for the dead today?

October 11, 2014 Aristotle and Luther: On Justice, Virtue and the Reformation of Values
Recent Comments
0 | Leave a Comment
Browse Our Archives
get the latest updates from
Uncommon God, Common Good
and the Patheos
Evangelical
Channel
POPULAR AT PATHEOS Evangelical
1 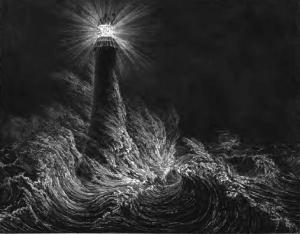