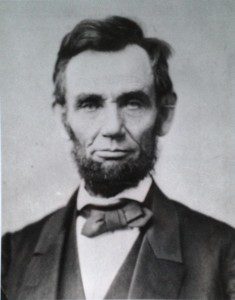 Today is President Lincoln’s 206th birthday. One of Lincoln’s greatest achievements was the Emancipation Proclamation. Although Lincoln is hailed as one of the United States’ greatest Presidents, there were (are) many who viewed Lincoln as an enemy of state rights, especially in the South. The debate continues in certain circles on the real reason for the Civil War: slavery, state rights…? The purpose of this post is not to engage this debate, but to extend the discussion analogically to church growth, especially in Oregon, where I work. Still, before I deal with the analogical extension, I must recount a bit of U.S. history and Oregon and Portland’s history bound up with slavery and racism.

The North made up of free states and the South made up of slave states wished to expand. The Missouri Compromise was set forth to preserve the union, by maintaining a delicate balance between slave and free states. The Kansas-Nebraska Act of 1854 repealed the Missouri Compromise.* One might think that Oregon would have been a very tolerant, diversity affirming state, and Portland, too, given its placement in the North and given its reputation today for affirming various kinds of diversity. Just think of Portlandia and the tagline “Keep Portland Weird.” Nothing could be further from the truth, as this OPB video chronicling Portland and Oregon’s racist pastreveals (See Local Color). The Oregon Encyclopedia recounts Black exclusion laws in Oregon (refer to this link).

We don’t have territorial laws in place today that exclude people based on skin color. But we do have consumer preference laws in places like Portland that unintentionally or intentionally do. I hear at times pastors say that people who wish to address racial issues, such as the Eric Garner case in New York or the Michael Brown case in Ferguson, should understand that not everyone has that passion, and that they would not wish for people to feel uncomfortable. What they fail to recognize is that it is not a consumer passion for African Americans that they can jettison like an old pair of shoes. It is the skin they wear day in and day out all their lives. White pastors and other white Christian leaders like me need to make sure that we are being prophetic in terms of calling for true unity in the body of Christ that breaks down divisions between various people rather than keep in place segregation laws of consumer preference bound up with profit-ic forms of church growth. The latter caters to people’s desires and comforts, giving them what they want, when they want it, and at the least cost to themselves (I developed this claim in Consuming Jesus: Beyond Race and Class Divisions in a Consumer Church, Eerdmans, 2007).

We need to help our largely white congregations in places like Portland and Oregon at large step inside Black people’s shoes and see life as they do. One of the ways that we can do this is to understand the history of places like Portland and Oregon at large. There are reasons why Portland is one of America’s whitest cities. A 2009 article referred to Portland as “America’s ultimate White City.” We need to be attentive to its history and seek to transform the dynamics that cater to such racial homogeneity. History hinders diversification in Portland, as this 2011 NPR article claims. We must be attentive to history; churches that don’t seek to understand history will end up repeating it; those that understand Portland and Oregon’s history and seek to change it by engaging constructively, wisely and openly the questions of race will be seen as safer places for many people of diverse ethnicity. Only then can more substantial forms of church growth occur (The Mosaix Global Network is a great resource for churches and church leaders; its tagline is “catalyzing the movement toward multi-ethnic churches in the 21st century for the sake of the gospel”). It is also essential that churches in places like Portland advocate for more affordable housing in gentrified communities where they are present so that ethnic minorities of limited financial means can again take up residence there (where they used to live) rather than be permanently displaced. Otherwise, they are serving to reinforce divisions and segregation based on income level and other social markers.

My desire is for churches in places like Portland, Oregon to move beyond catering to consumer impulses of people who attend their churches and put their finger on the pulse of Scripture, which highlights how God comforts the afflicted and afflicts the comfortable. Moreover, the Bible’s emphasis on caring for the orphan, widow and alien in their distress should make Portland churches all the more temples for the misplaced in a city known as a “Mecca for the Misplaced.” May Portland with its churches be a safe place for all misplaced peoples.

In 1858, Lincoln gave his “House Divided” speech during a run for U. S. Senate in which he drew from Jesus’ words in the gospels. Just as a country divided against itself cannot stand, so, too, a church divided against itself cannot stand. We can only put off the various divisions that separate us for so long. The chasm separating White and Black opinion inside and outside the church around the Garner and Brown cases only goes to show how racially divided we are as Christians and as a country by skin color perspectives—east and west of the Mississippi and north and south of the Mason-Dixie line. We must engage these divisions well in cities and their churches, like places in Portland; the tensions will not go away by ignoring or pacifying them, as Lincoln knew all too well.

February 14, 2015 Valentine’s Day and Fifty Shades of Love
Recent Comments
0 | Leave a Comment
"yes, not sure what your point is, but all men will give an account for ..."
fed up White Privilege: Where Do We Go ..."
"And that pendulum will swing both ways."
theresa perry White Privilege: Where Do We Go ..."
"All dates matter."
John (not McCain) Post 9/11: Christian Nationalism, the Global ..."
"A real conspiracy is generally a small group of people plotting to achieve a specific ..."
Bernard Dainton Conspiracy Theories: In Pursuit of Truth
Browse Our Archives
get the latest from
Uncommon God, Common Good
Sign up for our newsletter
POPULAR AT PATHEOS Evangelical
1