Many people with whom I speak can’t get over Donald Trump’s ongoing ascendance in national polls. He leads the field of candidates for the Republican Party’s nomination by staggering numbers. Whatever you think of him, he is hard to dismiss as an outlier (See “Latest Polls Set Stage for Unprecedented Circumstances”). An African-American civil rights lawyer with whom I spoke on Sunday agreed. Keep your eyes wide open. Don’t discount Trump, for he speaks to our base passions. He makes sense to the senses, though not refined moral sense.

President Obama’s Ghandian vision meshed with that of Dr. King may work well with the British and with moderate Americans, but will it ever work with Hitler or ISIS or Putin? (See “How the Inner Obama Fights Isis”)

Not that Trump’s vision really works. It only creates more problems in that war can conquer physically, and perhaps only temporarily, but not morally; nor does it transform the heart.

ISIS and Trump and Putin believe, it seems, that might makes right. It feels good to many Americans in the short term to operate by this strategy, even if it loses out on long-term import, which involves what King called a needed revolution of values. Maybe that is why warring people’s often killed the surviving children in war—to guard against payback. But is that what America wants to be known for—killing terrorists’ families, for example? (It was a topic of discussion during Friday, December 18th’s Republican Party Presidential Primary debate).

Obama’s liberal vision needs to become more broad-minded, to draw from Jonathan Haidt’s work, with his claim that “When it comes to morality, conservatives are more broad-minded than liberals. They serve a more varied diet,” as one reviewer of Haidt’s The Righteous Mind notes (Refer to “Why Won’t They Listen?”; refer also to the following site: “The Righteous Mind.”).

If scripted drone strikes that supposedly limit casualties and comprehensive diplomacy are the answers, not going to bed with Assad and Putin to destroy ISIS no matter the cost to the Geneva Convention or to our liberties, the President needs to show more evidence of being in touch with or at least viscerally grasping the angels of our lesser nature if he is to get Americans to pursue the angels of our better nature. Yet even President Lincoln who wrote and spoke famously of such angels in his first Presidential Inaugural Address (Refer here: Lincoln’s “First Inaugural Address”) resorted to drawing upon the extremely bloody and violent General Grant to wage war at great cost to life on both sides—North and South—to end the Civil War. Did the end justify the means?

Regardless of your answer to that question, a commander-in-chief, no matter the political party, needs to be able to show visceral evidence of understanding (rather than casually dismiss) his or her people’s base passions if one is to lift them with a vision more appetizing, more appealing, with a taste more refined.

ISIS and “WHISIS,” which is how The Daily Show referred to Donald Trump (According to the show, “The White ISIS” is an extremist leader who appeared out of nowhere, is self-financed, a master of social media, wants to take over the world, as well as push for a war between the West and Islam; see “Donald Trump: The White ISIS”), are perhaps driven by the same passion: it may be self-preservation and angst over being viewed as scapegoats, whether it be as Muslim men or White men, or some other group. So should they respond like the German nation, who felt they were treated by the winning side as sacrificial lambs or scapegoats after WW1, and follow Hitler who spoke into their moral vacuum and desire for self-preservation? Should they create other scapegoats, such as the Jews, homosexuals, the disabled, and whoever else is not them? What would you do, if you were seemingly scapegoated, like them? Before answering and acting upon the answer to that question, think and feel again: how attractive is a scapegoating orientation to you, if you’re not a resident of the last in-group standing?

The only way to get people to rise on the scale of moral sentiments may be to coax them up the ladder one rung at a time. Here I have drawn attention to where scapegoating might lead. It feels real good at first, when you’re the one in charge, not so good when you lose control and are sent outside the camp as the scapegoat bearing the people’s sin. No one will be left to defend our innocence, if we never spoke up for others when they were wrongly charged, including most Muslims. So while the end goal may be love of enemies, if one aspires to King’s radically altruistic ethic of love, one still has to wean people of self-love slowly much of the time: care for others, if you wish for them to care for you.

The Golden Rule of Matthew 7:12 often makes sense, even when love of the enemy of Matthew 5:43-48 doesn’t; so the commanders-in-chief might want to lead with it, when non-violence or targeted strikes that limit casualties fail to speak to the American people. Otherwise, Trump’s pugnacious diplomacy strategy—and with it his political campaign—will likely win out. Don’t underestimate him or his appeal to the lesser angels of our nature. 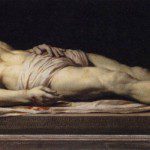 December 14, 2015
Be Patient with Patients: They Are Far More than Temporarily Animated Corpses
Next Post