Monogamous Sex Makes ‘Good’ Sense to Reason, or Does It?

In my last post titled “What’s Up with Monogamy? Reflections and Resolutions in a Time of Transition,” I noted the overriding sense in American society to look upon extramarital sex critically. Then I went on to ask:

Why does American society, by and large, still look upon extramarital sex with disfavor? Does the disfavor point perhaps to the receding echo of an ancient divine decree? Vestiges of the essential nature of things, created and/or evolved?… Does the disfavor follow from the leftovers of reason or is the disapproval a remaining fragment of human virtue? A lack of utilitarian appeal? Mere cultural moorings that will evolve or dissolve in time based on changes to our response mechanisms to behaviors and those responses’ neural impact on our psychological states?

It is not just Christian Scripture with its divine decrees and stipulations that looks disapprovingly on extramarital sex. Immanuel Kant would appear to make a compelling case against extramarital sex, albeit on rational grounds. It seems fair to claim that from a Kantian framework, extramarital sex could never prove virtuous. However, it should be noted that it is often argued that there is a tension or contradiction in Kant’s thought as to the appropriateness or virtue of sexual pleasure even in a marital context.

In an essay titled “Good Sex on Kantian Grounds, or A Reply to Alan Soble,”[1] Joshua Schulz lays bare Kant’s removal of the intellectual dimension from sexual desire in his treatment of sexual ethics in his Doctrine of Right. However, elsewhere in the same Doctrine of Right, Kant argues that sexual desire in marriage includes both intellectual and sensual qualities. It is the intellectual dimension (bound up with human personhood) that would safeguard against objectification;[2] the removal of it from consideration leads to sexual intimacy of any kind as morally problematic in Kant’s thought. Schulz seeks to resolve the seeming contradiction from the vantage point of Kant’s overarching system.

Regarding the moral dilemma posed by sexual pleasure, Kant maintains in his account of sexual ethics that in making one’s own body an instrument for another’s sexual pleasure and vice versa, a two-fold objectification and degradation occurs: there is no sense of either party being an end in themselves, but rather, nothing more than a means to an end of sexual gratification. Such dual objectification is morally repugnant or profane based on the second formulation of Kant’s categorical imperative; that is, one should never treat the other or oneself merely as a means (in this case, for the attainment of reciprocating pleasure), but also at the same time as an end. This formulation of the categorical imperative reads, “The practical imperative will thus be the following: Act so that you use humanity, as much in your own person as in the person of every other, always at the same time as end and never merely as means.”[3] If it is indeed the case that the double degradation noted above always occurs, it would appear that celibacy is not only inherently moral, but also a moral duty (Refer to Schulz’s treatment of Kant, sex and celibacy in “Good Sex on Kantian Grounds”).

As suggested above, this particular account of sexual intimacy as always morally deviant (and thus, the moral duty to pursue celibacy in all cases) does not appear satisfactory based on Kant’s overarching system. Beyond Schulz’s own treatment (to which I shall return), I offer the following. For one, how could celibacy as a moral duty, presumably imposed upon all, advance life for the race? Would it not function in effect as the equivalent of collective suicide, that is, the collective determination to end the human race? If so, this same determination would stand opposed to one of the formulations of Kant’s categorical imperative: “…act as if the maxim of your action were to become through your will a universal law of nature.”[4] If the aim is to cultivate virtue in the race, how would the equivalent of mass suicide in the form of universally binding celibacy foster virtue?[5] Universally binding celibacy would not prove coherent or satisfactory.

Schulz offers other reasons why celibacy is not a moral duty to which all people must adhere. In what follows, we will look briefly to Schulz’s own account of Kant’s philosophy in the attempt to address further situations where a couple can pursue sexual pleasure in a virtuous manner.

Contrary to Ayn Rand’s view noted in the previous post on monogamy (“What’s Up with Monogamy? Reflections and Resolutions in a Time of Transition”), for Kant, one can never rightly view a relationship as virtuous if one looks at the other simply as a means to one’s own self-cultivation, including rational pleasure—the just reward for one’s own greatness (as in the case of Dagny Taggart and Hank Rearden in Atlas Shrugged). No matter how seemingly rational, this orientation lacks virtue, even if the other party operates with the same aim in mind, as in the case of Rand’s model. From a Kantian framework (apart from whether or not Kant always reasoned in keeping with his overarching system), there are certain conditions that help to ensure that happiness involving sexual intimacy is wed to virtue.

According to Schulz (who is operating within a Kantian framework), the following conditions make it possible for a couple to experience sexual pleasure in a virtuous manner. First, the couple only pursues sexual pleasure in a context that safeguards against moral degradation; a lifelong monogamous marriage, especially one that is legally sanctioned, can help to insure virtuous sexual activity (still, according to Schulz, there may be other contexts beyond monogamy that can safeguard against concupiscence). Second, the union involving sexual intimacy features all the accompanying constraints (especially when they are preconditions for sexual intercourse) such as cohabitation and the mutual sharing of assets and joint care for the couple’s offspring resulting from intercourse. Third, the monogamous sexual union entails the mutual beneficent care and cultivation of virtue in one’s spouse. When practiced, these parameters make it possible for the two parties to pursue sexual intimacy in a morally virtuous manner (Refer again to “Good Sex on Kantian Grounds”).

As cogent as this line of reasoning may appear, someone might still ask: why should humans be considered ends in themselves based on intellectual capacities or some other qualities, and not simply as mere means? Is this perspective ultimately a rational claim devoid of religious dogmatic underpinnings? Or does Kant unknowingly presuppose the biblical tradition with which he was very familiar? The biblical tradition includes such teachings as the image of God doctrine (Genesis 1:26-31), which presents humanity as the pinnacle of creation (based on humanity’s ability to reason or some other quality or condition, according to many theologians), as well as the Great Commandments (Mark 12:30-31), which involve the tenet that we are to love our neighbors as ourselves in addition to loving God as the ultimate end.

Perhaps Kant would dismiss the idea that he presupposes the biblical tradition at one or more points in his intended rationally-framed ethical system. What is beyond dispute is that he would find abhorrent the notion that ethics is nothing more than mere cultural moorings that result from base instincts and the herd mentality. If that were the case, ethics, like sexual pleasure, would be nothing more than animal appetites. While the race would no doubt flourish, distinctively human dignity would disappear.

[1]See Joshua Schulz, “Good Sex on Kantian Grounds, or A Reply to Alan Soble,” in Essays in Philosophy, vol. 8/2; the link to the online version of the essay is embedded in the text above in this post.

[5]See a particular account of how suicide contends against the supreme principle of moral duty and virtue in Kant’s Groundwork, Ak 4:421-422; pages 38-39.

December 30, 2015
What’s Up with Monogamy? Reflections and Resolutions in a Time of Transition
Next Post 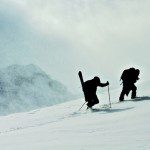 January 7, 2016 How Strong Is Your Will to Live, to Love, and to Hate? Musings on the Movie "The Revenant"
Recent Comments
0 | Leave a Comment
Browse Our Archives
get the latest from
Uncommon God, Common Good
Sign up for our newsletter
POPULAR AT PATHEOS Evangelical
1