Don’t be paranoid and look for persecutors behind every bush. This is easier said than done for those who have experienced traumatic stress as a result of torture. For consideration of what torture does to a person, see these PBS and CNN reports.

American Christians, who believe they are being persecuted, or who perceive persecution is fast approaching, need to ask themselves if they are confusing a loss of privilege with persecution, and possibly glorifying suffering and ridicule rather than identifying with Christ and rejoicing that they have been found worthy of suffering for his name (Refer here and here to two articles that may help us and those close to us discern if there are psychological factors in play, namely, mental delusions). Focused meditation on Christ Jesus and on his compassionate providential care in the midst of suffering, as well as thanksgiving for being united with him in his suffering, can provide comfort and help safeguard against paranoia. For the Apostle Paul, union with Christ entailed suffering; confident assurance of such union with Christ in the midst of suffering was a sign of destruction for those who oppose Christ’s people, and a sign of believers’ salvation (Philippians 1:27-30).

Some Christians perceive suffering as a mark of true Christianity. Yes and no. While Jesus prepares his disciples for the reality of suffering—and from which we should not shrink back, we are not blessed for suffering as such, but for our union with Jesus, which entails suffering. We should rejoice because we belong to his kingdom no matter the suffering. Suffering as a believer is honorable in that those who suffer are connected to Jesus and the prophets who paved the way for him and his eternal kingdom (Matthew 5:10-12).

Sometimes believers appear to revel in suffering for its own sake; suffering for the sake of suffering is morbid. Perhaps Nietzsche witnessed believers operating in this way. Still, he distorted Paul’s teaching of the import of the crucified life for believers. Paul did not claim that anything that suffers or that is nailed to the cross is divine[1]—hardly; rather, Paul claimed that the God of glory humbles himself to identify with us in our weaknesses and treats as folly humanity’s boast in wisdom and power apart from his lovingkindness revealed in Jesus (See 1 Corinthians 1:18-31; cf. Jeremiah 9:23-24; see also 1 Corinthians 13).

For all his ridicule of Christian weakness, Nietzsche seemed to comprehend the danger the Christian faith posed to the Greco-Roman world of elitist virtue and its modern sympathizers, like Nietzsche. It had—and still has—a strange power and mystique. The common people found in the Christian faith an alternative version of virtue that entailed humility and compassionate care for the downtrodden (unlike the militant, triumphalist, lofty Christendom so often on display in the West today). In Nietzsche’s mind, Christianity with its democratic instinct triumphed when Roman nobility was at its virtuous height, not during its decline. Perhaps such Japanese rulers like Hideyoshi and Ieyasu recognized the threat the Christian faith posed to their centralizing, stabilizing and noble rule A display in the Nagasaki museum for the twenty-six martyrs reflects upon this possibility: “Even if they never say that, probably the rulers were more afraid of the strong unity that Christian faith gave to simple people (Cf. Shimabara Rebellion) more than of an improbably foreign invasion.”[2]

If Nietzsche and these past rulers in Japan did not underestimate the power of Christianity involving suffering, Christians should not underestimate it either. Therefore, we should rejoice in the midst of such democratic suffering for Jesus, who is Lord for the brokenhearted, for the lowly, the downtrodden, the common people.

[2]One can find this statement on the “Zone 9” plaque at the museum. Here is the website for the museum: http://www.26martyrs.com/. It is my understanding that the Shimabara Rebellion (1637-1638) to which the statement refers was the only one of its kind, and was due to the oppression the common people experienced as a result of the harsh rule under the feudal system. 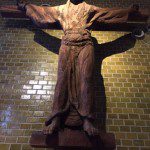 August 31, 2016 Wounded People Wound Others—Except for Wounded Healers (Part Three)
Recent Comments
0 | Leave a Comment
"Such a convicting concept. "Lord, I believe; help my unbelief." I am constantly having to ..."
Curtis Bell Are You Smoking What You’re Selling?
"While reading this I also thought of how there are often times those of us ..."
Monica Zherebnenko Are You Smoking What You’re Selling?
"“Cash smoked what he was selling,” the student remarked to Dr. Metzger. Johnny Cash was ..."
Gabriel Wallis Are You Smoking What You’re Selling?
"As the first reason for Dr. Metzger’s response why he cannot wait for Christian America ..."
Gabriel Wallis I Can’t Wait for Christian America ..."
Browse Our Archives
get the latest from
Uncommon God, Common Good
Sign up for our newsletter
POPULAR AT PATHEOS Evangelical
1