How Social Is Your Trinity? How Our Theologies May Say More About Us Than God

How Social Is Your Trinity? How Our Theologies May Say More About Us Than God December 19, 2016 Paul Louis Metzger

A great deal of talk has centered of late on social trinitarianism, which focuses on relational and social metaphors for understanding the Trinitarian life of God. Whether we are talking about psychological constructs like thought and memory, or these social notions, such images are intended to express what is meant by God being one and three at the same time. No matter the preference, it is important that we do not place God in the predicate position, and mental or social constructs in the subject position. Or to move from rules of grammar to laws of nature, never let the tail wag the dog.[1]

Going back to Karl Barth (who is often hailed as responsible for the renaissance in Trinitarian theology in modern times) who was ever mindful of Ludwig Feuerbach’s critical analysis of theology, the fear exists that analogical predication is the projection of human wish fulfillment: for Feuerbach, “God” is simply the sum of human attributes extended to infinity. Perhaps in view of Feuerbachian projectionism, and certainly in view of attention to Christian Scripture, Barth reframes constructs like power and lordship to account for Jesus’ incarnation.[2] Jesus’ incarnation is not one illustration among many to reflect God’s deity, but its ultimate explication, for he is the image of the invisible God, as well as the radiance of God’s glory and exact representation of his being, as Colossians 1:15 and Hebrews 1:3 claim respectively. Rather than looking at power in view of human aspirations for power’s heights, Barth probes the depths of human weakness. After all, as St. Paul wrote, God’s weakness trumps human power (1 Corinthians 1:25). Thus, Christ’s humility demonstrates God’s deity.

It is not simply the second Person of the Trinity and divine Word whose deity Jesus’ incarnate life demonstrates (John 1:1-3, 14), but also the Father’s deity (See also John 1:18). Humble service and sacrifice, if they are qualities that pertain to one member of the godhead, pertain to the other members, equally. For example, Gregory Nazianzus writes:

Take, in the next place, the subjection by which you subject the Son to the Father. What, you say, is He not now subject, or must He, if He is God, be subject to God? You are fashioning your argument as if it concerned some robber, or some hostile deity. But look at it in this manner: that as for my sake He was called a curse, Who destroyed my curse; and sin, who takes away the sin of the world; and became a new Adam to take the place of the old, just so He makes my disobedience His own as Head of the whole body. As long then as I am disobedient and rebellious, both by denial of God and by my passions, so long Christ also is called disobedient on my account. But when all things shall be subdued unto Him on the one hand by acknowledgment of Him, and on the other by a reformation, then He Himself also will have fulfilled His submission, bringing me whom He has saved to God. For this, according to my view, is the subjection of Christ; namely, the fulfilling of the Father’s Will. But as the Son subjects all to the Father, so does the Father to the Son; the One by His Work, the Other by His good pleasure, as we have already said. And thus He Who subjects presents to God that which he has subjected, making our condition His own. …  The same consideration applies to another passage, “He learnt obedience by the things which He suffered,” and to His “strong crying and tears,” and His “Entreaties,” and His “being heard,” and His” Reverence,” all of which He wonderfully wrought out, like a drama whose plot was devised on our behalf. For in His character of the Word He was neither obedient nor disobedient. For such expressions belong to servants, and inferiors, and the one applies to the better sort of them, while the other belongs to those who deserve punishment. But, in the character of the Form of a Servant, He condescends to His fellow servants, nay, to His servants, and takes upon Him a strange form, bearing all me and mine in Himself, that in Himself He may exhaust the bad, as fire does wax, or as the sun does the mists of earth; and that I may partake of His nature by the blending. Thus He honours obedience by His action, and proves it experimentally by His Passion. For to possess the disposition is not enough, just as it would not be enough for us, unless we also proved it by our acts; for action is the proof of disposition.[3]

The Father and Son have one will and are indivisible in their working … [Then] in what manner did the Father send his Son? … [D]id he give an order? … Whichever way it was done, it was certainly done by word.  But God’s Word is his Son.  So when the Father sent him by word, what happened was he was sent by his Father and his word.  Hence it is by the Father and the Son that the son was sent, because the Son is the Father’s word.[4]

In what way could the Father be greater [than the Son]?  If he is greater, he is greater with greatness. But since His greatness is shared with the Son…the Father cannot be greater than the greatness he is great with.  So [they are] equal…and it remains if they are not equal in any one thing, then [the Son] is not equal.[5]

So, if one were to argue—as has become a hot topic recently, including at the 2016 Evangelical Theological Society meeting—that the Son is eternally subordinate to the Father, by the logic used in Gregory and Augustine, one would have to state also that this element of obedience exists in the Father as well. For “the Son can do nothing by Himself; he can do only what he sees the Father doing, because whatever the Father does the Son also does” (John 5:19). For Gregory Nazianzus and Augustine, if the Son eternally obeys the Father in eternity, then it follows logically that the Father obeys—or gives himself to—the Son. After all, they are God—equal in all attributes or perfections. As far as I know, these fathers of the Christian church did not frame consideration of this subject in terms of a social agenda one way or another. I wonder if they would even find some of the political and ecclesial debates from different quarters presently off-putting and distracting, especially as it pertains to God’s inner life.

Ultimately, I hope the current debate does not distract us from what really counts: the demonstration of what divine power looks like in our world today. Following in the footsteps of Jesus who is God in the flesh, may we who profess Jesus as Lord not project onto him our aspirations for glory and power. Rather, may we take upon ourselves he and his Father’s keen psychological intentions and social aspirations in the Spirit to serve the church and society in frailty and weakness. May our theology and practice say more about this God in his humble glory than us in our fallen pride.

[1]We should account for the significance of the Trinity in the life of the church, and through the church, for the society at large. However, the Trinity should never be taken to promote political ideologies and replace the politics of Jesus, which is his person and act as the substance of the gospel. Lesslie Newbigin was concerned for what he took to be a discounting of Trinitarian thought forms in his day, as set forth in The Open Secret: An Introduction to the Theology of Mission, rev. ed. (Grand Rapids: Eerdmans, 1995), pages 27–28. However, he also expressed concern over the opposite extreme—the replacement of the gospel of Jesus Christ with Trinitarian constructs that were extensions of reigning political constructs in society: “What gives ground for anxiety here is the positing of a Trinitarian model against the model of Christocentric universalism. The doctrine of the Trinity was not developed in response to the human need for participatory democracy! It was developed in order to account for the facts that constitute the substance of the gospel.” Lesslie Newbigin, “The Trinity as Public Truth,” in Kevin J. Vanhoozer, ed., The Trinity in a Pluralistic Age: Theological Essays on Culture and Religion (Grand Rapids: William B. Eerdmans, 1997), pages 7. See the fuller context for the statement on pages 7 and 8.

[5]Augustine, The Trinity, VI.i.6 (p.208). Emphasis added. I am grateful for extensive conversations on the various topics of this post with my colleague Derrick Peterson. His work can be found at his blog agreatercourage.

December 17, 2016
Beyond Fashion and Fanfare: Follow in the Footsteps of Jesus' Unassuming Love. A Tribute to Clark Blakeman
Next Post 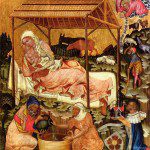 December 23, 2016 Which Glory, Which Peace Will We Celebrate This Christmas?
Recent Comments
0 | Leave a Comment
"Such a convicting concept. "Lord, I believe; help my unbelief." I am constantly having to ..."
Curtis Bell Are You Smoking What You’re Selling?
"While reading this I also thought of how there are often times those of us ..."
Monica Zherebnenko Are You Smoking What You’re Selling?
"“Cash smoked what he was selling,” the student remarked to Dr. Metzger. Johnny Cash was ..."
Gabriel Wallis Are You Smoking What You’re Selling?
"As the first reason for Dr. Metzger’s response why he cannot wait for Christian America ..."
Gabriel Wallis I Can’t Wait for Christian America ..."
Browse Our Archives
get the latest from
Uncommon God, Common Good
Sign up for our newsletter
POPULAR AT PATHEOS Evangelical
1