Mother Mary Stands at the Crossroads of the New Year 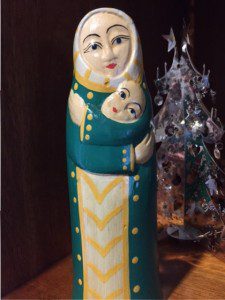 It is fitting that the Church celebrates Mary, the Mother of Jesus, on January 1st. While Catholics and Protestants have been divided over the significance of Mary for the Church’s life, she can and does serve as a point of connection, and not simply between the old and new year. I will develop this theme of connection in what follows.

Today, the Roman Catholic Church celebrates the Solemnity of Mary, which involves honoring her as “the Holy Mother of God” (Refer here). While there are many feast days at Christmastide, Mary alone bears the honor of a solemnity in the Catholic Church in the days immediately following Christmas. A solemnity is chief among liturgical celebrations. As one Catholic author writes, “A solemnity is a liturgical celebration that is different from feast days and memorials. All three honor the Saints or special aspects of Jesus and Mary, but solemnities are the highest degree of celebration and are reserved for the most important mysteries of the Faith.” In Catholic circles, the celebration of Mary on this day as a solemnity takes precedence over “The Feast of the Circumcision of the Lord,” which also occurs on January 1st (See my blog post on this theme).

The honor attributed to Mary among Roman Catholics has been unsettling to Protestants since the time of the Reformation. While Martin Luther, Zwingli and others certainly held her in much higher regard than many Protestants today, John Calvin, for example, struggled with the wording “Mother of God.” However, Calvin did affirm the Greek term theotokos given its theological import (theotokos is often translated “God-bearer”; for a Catholic rendering of the word as “Mother of God,” refer here). Mary is theotokos, not christotokos (“Christ-bearer” or “bearer of Christ”), the latter being the title which Nestorius preferred. Nestorianism denied the intrinsic and integral unity of Jesus’ divinity and humanity, and was condemned at the ecumenical Council of Ephesus in 431 AD (Refer here as well). The council chose the term theotokos in order to convey the fundamental unity of Christ’s person involving his divine and human natures (without thereby seeking to suggest a confusion of the two natures). The one who was born of Mary was God in the flesh. It is important to honor Mary as the God-bearer for this reason, if for no other. It should be noted that the teaching of the virgin birth (See the Apostles’ Creed), which preceded the affirmation of theotokos, also challenges Docetism, which is the heretical notion that Jesus only appears to be human. Jesus is fully divine and fully human. Mary stands at the crossroads of the all-important discussion of the divine and human Jesus (For an excellent treatment from a Protestant Evangelical perspective on the significance of Mary, which includes historical theological considerations, see Timothy George’s article titled “The Blessed Evangelical Mary: Why We Shouldn’t Ignore Her Any Longer,” in Christianity Today, December 1, 2003). For all the differences between the Catholic and Protestant traditions in consideration of Mary, her significance doctrinally in terms of theotokos and the virgin birth should serve as important points of connection at the crossroads of the debate.

Protestants often raise concerns over what they take to be an elevation of Mary as co-mediator of salvation (Refer here to Timothy George’s article). While it is certainly important to challenge any such associations, which would minimize Jesus’ singular mediatory role, it is also important to cherish Mary for her place in the history of salvation, as George also notes. As with her import for connections in the midst of theological debates involving her, Mary stands at the crossroads as a connection between the Old and New Testaments, and between Jesus’ incarnate life up to his death and his resurrection and ascension. She stands with men and women of old who were of the ancestral line of Jesus, as well as people of faith (See Matthew’s genealogy in chapter 1:1-17). Mary remains standing at the cross along with a few other women and John, while Peter, the supposed rock, is nowhere to be found at Jesus’ crucifixion and death (John 19:25). Mary is also standing or seated in the upper room with other followers of the resurrected and ascended Jesus as they prayerfully await the Holy Spirit’s descent (Acts 1:13-14; cf. Acts 1:4-5).

Moreover, Mary stands at the crossroads of faith and obedience in the midst of doubts and human frailties. Mary is a person of elevated faith and obedience. Consider how she is troubled and bewildered by the angel’s greeting and declaration that she would give birth to the Son of God (See Luke 1:29, 34 and 35). And yet, she responds in obedient faith: “Behold, I am the servant of the Lord; let it be to me according to your word” (Luke 1:38; note also the exuberant note of praise and thanksgiving in her song of praise, the Magnificat, in Luke 1:46-55). Moreover, I can think of no saint of old who experienced more pain and loss in obedience. Jesus’ lonely life and the extreme opposition he faced would pierce her own soul as his loving mother, as Simeon declared (Luke 2:35). For all Mary’s elevated faith and obedience, she was also flawed. Thus, we can identify with her in many ways, as we stand at the crossroads of faith and doubt, obedience and disobedience, in the new year. Mary’s flaws of presuming on Jesus and intruding from time to time should not cause us to minimize her importance, but endear her to us. Like her, do we not try and get Jesus to reveal his glory prematurely in our life situations? (See John 2:1-4) Do we not try and get him back in line and save him from looking bad and losing total control? (See Mark 3:20-21, 31-35; see also Luke 2:41-52). In each instance referenced here, Mary (and Joseph in Luke 2) experiences Jesus’ loving rebuke. Mary’s God-endowed faith and obedience in the midst of her frail humanity should inspire us to follow in her footsteps, just as she follows in the footsteps of her Son and Lord.

As we cross over from the old year into the new, may we learn from Mary and cherish her as one who stands at the crossroads as a point of connection in various spheres: ecumenical discussions on Jesus’ identity, the Old and New Testaments with the formation of Jesus’ community of disciples, and last but not least, faith and obedience to the Lord. May we learn from the theotokos—who is far more than christotokos in her elevated obedience. May Mary and her Magnificat inspire us to cherish the faith and bear our crosses magnificently as we follow Jesus at every juncture on the journey in this new year.

For more on the church year and its importance for the Christian imagination and approach to life, check out the sampler here at this link to my new book, Setting the Spiritual Clock: Sacred Time Breaking Through the Secular Eclipse. Here is the YouTube trailer for the book. You can get a 40% discount for the book if you order by January 31st at the publishing house website. Please be sure to use the discount code of ADVENT20 when placing your order. Happy New Year!

December 31, 2016
Which Will It Be on New Year's Eve and Day—Foolish Feasting or Joyful Solemnity?
Next Post

January 3, 2017 You Get One Shot at Life. Invest Well this Year.
Recent Comments
0 | Leave a Comment
Browse Our Archives
get the latest from
Uncommon God, Common Good
Sign up for our newsletter
POPULAR AT PATHEOS Evangelical
1