How Much Would Bonhoeffer Value the Values Voter Summit?

How Much Would Bonhoeffer Value the Values Voter Summit? October 14, 2017 Paul Louis Metzger 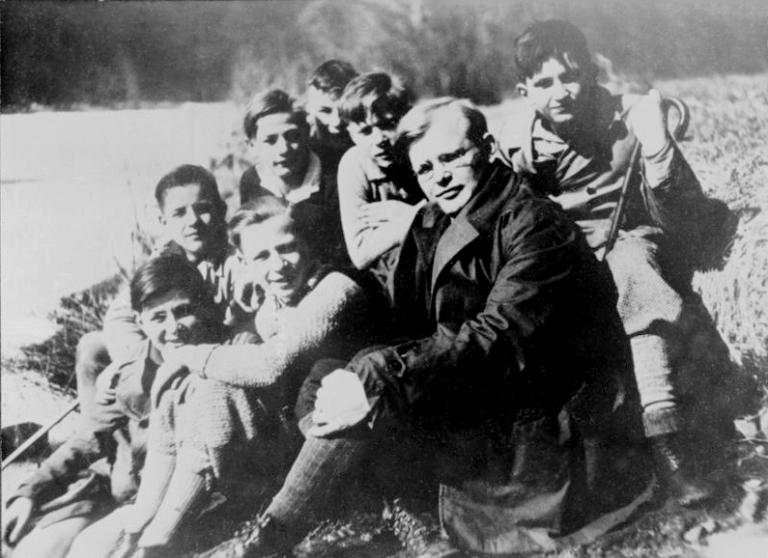 A great deal of talk in evangelical Christian circles centers on religious freedom and values. It is a theme on display at the Values Voter Summit where President Trump spoke this week (refer here, too). We want to make sure we have carved out space to exist and worship in our increasingly secular world, and believe it is not only an American legal right, but also a divine command.

The German pastor, theologian and martyr Dietrich Bonhoeffer (shown here with his students in 1945; Wikimedia Commons) thought a great deal about the church’s relation to the world. I wonder how he might approach the subject of religious freedom and values in America today. Here are a few references on freedom and space from Bonhoeffer’s Ethics[1]: “The space of the church is not there in order to fight with the world for a piece of its territory, but precisely to testify to the world that it is still the world, namely, the world that is loved and reconciled by God” (page 63). “The church can only defend its own space by fighting, not for space, but for the salvation of the world” (page 64). “Otherwise the church becomes a ‘religious society’” (page 64). The church’s first task is “to be witnesses of Jesus Christ to the world” (page 64).

As with the Letters and Papers from Prison, one finds in Bonhoeffer’s Ethics no independent existence for Christ, the church, and the world.[2] That is not to say Bonhoeffer would aim to promote a religious state or Christian state. Hardly. But whether or not the world acknowledges Christ and the church, Christ and the church take seriously the world: there is no such thing as an autonomous world, “where the worldly establishes itself as an autonomous sector, this denies the fact of the world’s being accepted in Christ” (page 60). Nor is there an autonomous church (pages 60-61). “Christian faith perceives this in the fact that the reality of God has revealed itself and witnessed to itself in the middle of the real world” (page 54). An autonomous world as well as an autonomous church lead to “arbitrariness” (page 61). “In Jesus Christ the reality of God has entered into the reality of this world” (page 54). “In Christ we are invited to participate in the reality of God and the world at the same time, the one not without the other” (page 55).

For the Bonhoeffer of Ethics and Letters and Papers from Prison, Christ and the church affirm the value of the world in all its non-religiosity. However, it does not affirm the world’s rejection of God’s love for it, but values the world because of God’s love. The church must embody the reality that Christ is for the entire world (Ethics, pages 66-67). “It is the task and the essence of the church-community to proclaim precisely to this world its reconciliation with God, and to disclose to it the reality of the love of God, against which the world so blindly rages” (page 66). “Christ is Christ only in the midst of the world” (page 67). “It is nothing but unbelief to give the world . . . less than Christ” (page 67). “The church is separated from the world only by this: it believes in the reality of being accepted by God—a reality that belongs to the whole world—and in affirming this as valid for itself it witnesses that it is valid for the entire world” (pages 67-68).

In view of Bonhoeffer’s life witness, such value placed on the world would take seriously the plight of all vulnerable populations, not simply the human unborn, but also the poverty stricken, refugees, and minority populations of whatever kind. I believe it is fair to say that for Bonhoeffer, Evangelical summits on values must be sure to account for the grace of God poured out on all creation if they are to be worthy of the word “evangelical” in the Protestant Reformation sense of that term: God prizes us based on grace and not hereditary or national merit, ‘moral majority’ accomplishments, or financial market value. It is vital that we be known for God’s liberating grace toward the world, not for our movement’s freedom apart from the world.
_______________

October 12, 2017
Many of Us Need to Disabuse Ourselves of the Notion that Widespread Abuse of Women Is a Thing of the Past
Next Post

October 17, 2017 What Boxes Do You Cross in the Attempt to Gain Eternal Life?
Recent Comments
0 | Leave a Comment
Browse Our Archives
get the latest from
Uncommon God, Common Good
Sign up for our newsletter
POPULAR AT PATHEOS Evangelical
1