The Politicizing of the Faith Is Leading to Evangelical Christianity’s Spiritual Demise December 7, 2017 Paul Louis Metzger 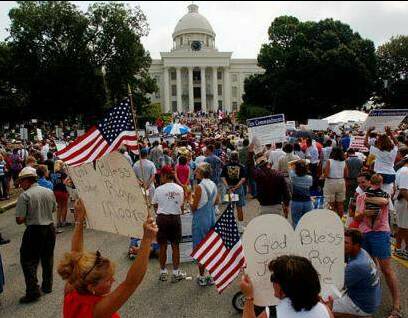 August 2003 rally in front of the Alabama state judicial building in support of Roy Moore.

The other night, one of my students asked me during a break in class, “Why do you still call yourself an Evangelical?” He was experiencing angst in view of how he perceived many Evangelical Christians politicizing the faith in ways that he deems hypocritical, scandalous, and oppressive. He’s not alone. In my experience, many young Evangelical Christians are opting out of their religious tradition or tribe because of disillusionment over what they believe is a politicizing of the faith for political gain at all costs by their parents’ generation.

From the silence of many of President Trump’s Evangelical advisers over Charlottesville to conservative Christians’ vocal support for Roy Moore, it is becoming increasingly difficult for those who have viewed themselves as Evangelical Christians to continue to self-identify in this way.

A recent article in The Atlantic resonates with the student’s angst: “Christian Support for Roy Moore ‘Looks Like Hypocrisy to the Outside World.’” The sub-heading reads, “Recent allegations against the aspiring Alabama senator fit a long and complicated history of religious debates about sex.”

Certainly, there are those outside of Evangelical Christianity who have also been accused of sexual improprieties, including U.S. Senator Al Franken, who resigned from office today. The difference in my mind is that we conservative Evangelicals have always presented ourselves as the champions of family values and sexual purity. I still remember how Evangelicals went after Presidential candidate Bill Clinton over allegations of sexual misconduct. Where was the Evangelical support for conservative Christian Anita Hill who came forth to level charges of sexual impropriety against Clarence Thomas, President George H. Bush’s nominee for the Supreme Court during his confirmation hearings? Evangelicals did show up later with fingers pointing at Clinton when Paula Jones accused him, as well as when the affair with Monica Lewinsky surfaced. Regarding the first two ordeals, Marie Griffith stated in her interview for The Atlantic article noted earlier,

Conservative Christians rallied around Clarence Thomas and suggested there was nothing believable about Anita Hill’s charges. But with Paula Jones, they came to her defense, legally and financially. Even without judging the truth or falsity of either claim, you can see that a political reaction was at work.

Then there was the defense of Moore by Jim Ziegler, Alabama’s state auditor. He asserted that Mary was a teenager and Joseph was an adult when they were married. Based on this claim, if Moore had made sexual advances on a fourteen-year-old girl, he was operating in keeping with divinely sanctioned precedent. In response, Jim Martin, editor at large of the Jesuit magazine America, wrote, “comparing the allegations against Roy Moore in any way to Joseph and Mary is disgusting.” He added: “We have no idea about the exact ages of either the Virgin Mary or St. Joseph at the time of their betrothal or marriage.”

Ziegler’s ridiculous and scandalous remark only adds angst over the alleged sexual scandal involving Moore, a former judge who displayed publicly the Ten Commandments in his courtroom. Later, Moore endeavored to have a monument of the Ten Commandments made. Given the conflicting images of righteousness and unrighteousness, which symbolizes the conflicted nature of the movement, young students like mine at the Evangelical seminary where I teach are finding it harder and harder to call themselves Evangelicals.

No doubt, there have been Roman Catholics who have struggled over their Catholic faith in view of sexual scandals involving priests. We Protestants have had our share as well. What is needed is not to disown Catholicism or Evangelicalism, but, among other things, to make sure we who are Christian leaders are living godly and holy lives, which includes sexual purity. It also requires that we don’t make our faith impure by politicizing the faith and compromising morals for political gains. As Griffith said during her interview with The Atlantic,

I think what we’re seeing is an extreme politicization of Christianity. It almost does not feel like the evangelical tradition of a generation ago. I don’t want to overstate that, of course—there’s plenty that’s still evangelicalism. But it has become so focused on power.

Certainly, Christians have a responsibility to be involved in one way or another in cultivating civic virtue and building our society, including political discourse. Moreover, the church is itself political in that it is Jesus’ kingdom community. Even so, in no way shape or form should we manipulate the faith so that it serves partisan political aims. The politicizing of the faith is leading to the Evangelical movement’s ruin in this country. The power of the cross must replace the power of legislation involving victory at all cost. Otherwise, we will totally empty the cross of its power in our lives (See 1 Corinthians 1:17). We may gain political power, but lose all credibility with the next generation.

December 3, 2017
Advent: Jesus Is Coming! Are We Waiting for Him?
Next Post

December 9, 2017 Abandon the Evangelical Ship or Evangelical Idols? Reflections on the Prophet Jeremiah
Recent Comments
0 | Leave a Comment
"Such a convicting concept. "Lord, I believe; help my unbelief." I am constantly having to ..."
Curtis Bell Are You Smoking What You’re Selling?
"While reading this I also thought of how there are often times those of us ..."
Monica Zherebnenko Are You Smoking What You’re Selling?
"“Cash smoked what he was selling,” the student remarked to Dr. Metzger. Johnny Cash was ..."
Gabriel Wallis Are You Smoking What You’re Selling?
"As the first reason for Dr. Metzger’s response why he cannot wait for Christian America ..."
Gabriel Wallis I Can’t Wait for Christian America ..."
Browse Our Archives
get the latest from
Uncommon God, Common Good
Sign up for our newsletter
POPULAR AT PATHEOS Evangelical
1