Memory Is a Great and Powerful Mystery

Memory is a great and powerful mystery that can impact our lives for good or for ill.

Memories often shape our present and future. They constitute our being in various ways. The biological and neurological connections also form and confirm relational connections. An article on the science of memory at John Hopkins University claims that “memories are who we are.” The article goes on to argue that memory formation is “also a biological process.” Memories are “all about connections”:

It is worth noting that scientists have returned to Augustine for his contributions in their ongoing explorations of memory (Refer here and here, for example). Also worth noting is that this is not merely a theological-philosophical and scientific exploration for me. It looms large for my family situation.

As many of you know, my adult son Christopher endured a traumatic brain injury in January 2021. Just last night, my wife and I spoke again of the need to teach Christopher new memories. He has likely forgotten so much. In addition to trying to teach him to move his fingers and arms and hold and use objects, we have to teach him about certain people and places and events in the past. We have no idea the extent of the damage to his memory, since he does not communicate with words at this time.

Christopher’s traumatic brain injury has etched certain memories in my mind. For example, I know exactly what I was doing the night I received the call that Christopher was in emergency surgery for TBI. I remember the tears and cries of family members and conversations with doctors. I rehearse these events in my mind, even when I am not aware. As a result, the synapses bound up with exposure to these events likely get stronger.

Other events fade into the background and slip from my mind since I don’t rehearse them in my mind. It can be quite frustrating at times, as when I forgot to respond to an email or text message. At other times, it can be rather funny. So, I need to put in place reminder systems for dealing with memory lapses.

Let me give you an example of one funny reminder strategy. After all, laughter can serve as good medicine for the soul during lengthy periods of sorrow. I posted the following entry on Facebook the other day with the picture of myself that appears with this post:

One of the best things about getting old(er) together with my wife Mariko is forgetting our grievances with one another. For example, I found this very nice sweater in my drawer the other day and asked her about it. She said it was a Christmas present last year, which she forgot to give me. So, she put it in my drawer. In a few years, I will forget that she forgot. So, I am taking this picture to remember in case I forget so I can remind her when I forget to give her a Christmas present. I guess I already forgot that forgetting grievances is one of the best things about getting older with my spouse.

I thank God for the memories I have formed with my wife and other loved ones and friends over the years. Of course, there are grievances (the forgotten Christmas present sweater is not one of them!). But love has a way of healing memories to set them in a larger relational context. My wife and I are thankful that our memories with Christopher give us strength to try and teach him new memories. Just think what it would be like if we did not have the mental capacity to remember for him.

I also shudder to think what it would be like if God and/or our community of supporters did not remember Christopher, his wife, daughter, mom, sister, and dad. Memory is a great and powerful mystery.

I work hard at trying to remember people’s names, whether they be my students, Christopher’s care givers, or people I meet in other contexts. I get very frustrated with myself when I forget someone’s name or call someone by the wrong name. So, I repeat the name in my mind, even using word associations, to cultivate the connection in the memory. We need to do the same with Christopher–showing him pictures, repeating people’s names, and sharing stories.

Whether we are talking about relationships with God or fellow humans, each of us needs to cultivate  healthy memories. As Augustine reasoned, memory is critically important for our knowledge of God, ourselves, and life at large.

For example, I need to recall repeatedly God’s faithfulness in so many ways amid this unfolding tragedy my son and family have endured. Amid the incredible trials, God has shown up in various overt and subtle ways, including through the faithfulness of other people. It is important for me to remember the faces, names, and stories. I also need to recall repeatedly the surviving and thriving strategies involving self-management and emotional well-being I have learned through this ordeal. Lastly, I need to recall positive experiences bedside with Christopher as we face so many hurdles every passing day. I will close with one short account.

Last Monday, I headed over to Christopher’s care facility to watch Monday Night Football with him. I put his distinctive Ray-Band prescription glasses on him after turning on the TV. He gave me a big smile when I told him we were going to watch our beloved Chicago Bears play the New England Patriots. I don’t know if he recalls just how bad the Bears have been over the past several years, or how good the Patriots have been during much of that time. If so, should I remind him? Or should I simply reinforce the new memory he and I made, as we watched the Bears surprisingly or miraculously throttle the Patriots in front of a national audience? I lean toward the latter.

One thing I will do is fight to remember that smile, conscious gazes, and controlled gestures at times when I see blank expressions on Christopher’s face. His consciousness comes and goes. But my memories of Christopher in the present and realistic hope for meaningful recovery keep me going.

Thank you for reading and for remembering Christopher and his family in prayer. 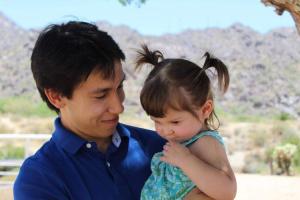 To read the various posts on our family’s unforgettable journey with TBI, please go to this link. God bless you.

About Paul Louis Metzger
Paul Louis Metzger, Ph.D., is Professor of Theology & Culture, Multnomah University & Seminary; Director of The Institute for Cultural Engagement: New Wine, New Wineskins; and Author and Editor of numerous works, including Setting the Spiritual Clock: Sacred Time Breaking Through the Secular Eclipse (Cascade, 2020) and a forthcoming book on a personalist approach to ethics (IVP Academic, 2023). You can read more about the author here.
Previous Post

October 23, 2022
Lord Jesus, To Whom Shall We Go During Times of Crisis?
Next Post