Time for another go round of responses to comments on the last two posts in my current series on math and morality:

So turn this to morality. What if smoking pot was permissible starting tomorrow. A large number of people would now take part in it while many others would consider to hold it wrong. Are their internal sensors faulty? Repeat this with abortion, nation-wide permissibility of gay marriage, etc. Some would immediately partake and others would still hold that it was wrong.

If the moral sense is a human universal, it would seem that we would line up fairly reasonably on these issues because we’re using an innate human “sense” to pick up some objective, external signal of what the morally upright action is.

Hendy, you mix issues that actually have to do with morality with those that don’t. Very few people would argue that smoking pot (privately etc etc) is a moral issue in the same way that abortion is. Abortion is also cloudy because pro-choice folks are not in favor of murder, they just value the fetus less than anti-choice people.

Charles is right. A lot of the disagreement about the moral issues cited above (pot, abortion, etc) are disagreements about the facts of the case, not about how they correspond with morality. I think C.S. Lewis had it right when he said in Mere Christianity:

“But surely the reason we do not execute witches is that we do not believe there are such things… There is no difference of moral principle here: the difference is simply about matter of fact. It may be a great advance in knowledge not to believe in witches: there is no moral advance in not executing them when you do not think they are there. You would not call a man humane for ceasing to set mousetraps if he did so because he believed there were no mice in the house.”

Whatever moral frame you subscribe to, and whether or not you believe it is transcendent or absolute, most of your moral heavylifting is still going to come from trying to get a empirical sense of the stakes of whatever you’re dealing with, not from figuring out how they match up to moral behavior.  I think the most common moral problem we face is the question of how much examination of a choice is necessary to meet a standard of due diligence. 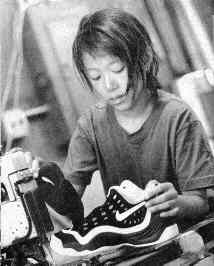 I remember, when I was in elementary school, I read an article describing the brutal conditions in Nike’s sweatshops, and, since that day, have never bought or worn a Nike product.  I missed the next step, which would have been to look into other sneaker manufacturers to see if they were just as abusive as Nike.  To be honest, I still don’t meet this standard when I buy shoes, apparel, or electronics, all of which carry the risk of being complicit in abusive business practices.  I just don’t have the time to investigate the provenance of everything I buy.

Instead, I outsource a lot of my responsibility to reporters and advocacy groups.  I rely on them to uncover horrific practices and publicize them.  Similarly, I look to them to tout eco- or worker-friendly companies and products, which I then will make a point to seek out and buy.  At what point does my outsourcing become irresponsible?  How complicit am I in the decisions I make that are guided by rational ignorance?