This is part of a series of posts on gay marriage. You can see all posts in the series at the index.

Yesterday, I wrote about the need for religious opponents of same sex marriage to base their objections in facts that are accessible in the secular sphere. Some Catholics maintain that most Christian morality, and sexual morality in particular, are manifestly correct and accessible to all people, whatever their religious background. In a profile in the New York Times, Catholic theologian Robert P. George argued that it is Christians who are really arguing from the grounds of non-sectarian public reason when they oppose “feminism, multiculturalism, gay liberationism and lifestyle liberalism.”

So let’s take a look at the logic of their arguments.

If you remember the case of the Catholic theology professor being fired (unfairly, in my opinion) for teaching Catholic theology, you may remember that the topic that got him fired was the applicability of Natural Moral Theory to homosexuality. The full text of his email is available online, but I’ve excerpted the relevant section on NMT below (italics are mine):

Natural Moral Theory says that if we are to have healthy sexual lives, we must return to a connection between procreation and sex. Why? Because that is what is REAL. It is based on human sexual anatomy and physiology. Human sexuality is inherently unitive and procreative. If we encourage sexual relations that violate this basic meaning, we will end up denying something essential about our humanity, about our feminine and masculine nature.

I know this doesn’t answer all the questions in many of your minds. All I ask as your teacher is that you approach these questions as a thinking adult. That implies questioning what you have heard around you. Unless you have done extensive research into homosexuality and are cognizant of the history of moral thought, you are not ready to make judgments about moral truth in this matter. All I encourage is to make informed decisions. As a final note, a perceptive reader will have noticed that none of what I have said here or in class depends upon religion. Catholics don’t arrive at their moral conclusions based on their religion. They do so based on a thorough understanding of natural reality.

As I’ve written before (more than once, in fact) evolutionary utility does not correspond to moral behavior. A traditional vision of marriage is not sanctified by the reproductive function of heterosexual coitus and more than polyamory is justified by its persistence throughout human history as documented in Dan Savage’s new favorite book Sex at Dawn .

To talk about the impact of any system of marriage, we can limit ourselves to talking solely about ease of reproduction and the satisfaction of evolutionary impulses, or we can talk about values and accept that we’re going to have to do a lot of philosophical heavy lifting before we get anyone else on our side.

Even if we confine our questions about gay marriage to the pretty much universal values of fulfilling relationships with or without children (who, if they exist, should be happy and healthy), we’re quickly entering the realm of shoddy social science. Here, I think it is fair to place the onus of proof on the opponents of gay marriage. Given that, as Douthat admitted on Monday, gay unions pretty much resemble heterosexual ones in today’s era of no fault divorce, it falls to conservatives to propose a causal mechanism that would link gay marriage to cultural decline or to conduct sociological research that at least establishes a strong correlation.

With a wide range of nations allowing gay marriage, you would think they’d have plenty of data to work with. 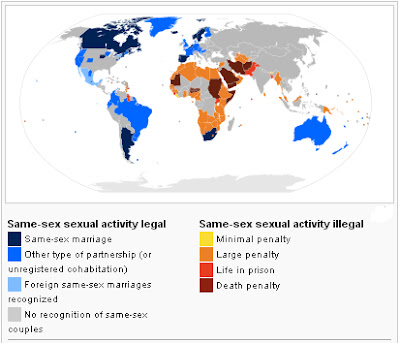 August 12, 2010 Do we care too little about marriage?
Recent Comments
5 Comments | Leave a Comment
Browse Our Archives
Follow Us!