Tangled up in Blue

Thanks so much for all the comments and challenges to yesterday’s post in the Math and Morality series. Rather than reply in the comment thread, I’ll be putting up response posts throughout the day. Please comment to clarify or bring up something I neglected! 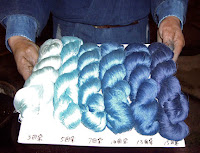 I’m glad Anonymous linked to Steven Pinker’s NYT article on ”The Moral Instinct” and that J.C. linked to the article on how descriptions of color vary across cultures. Hopefully pairing these two can help me clear up a little what I am talking about when I talk about the moral instinct.

Across cultures, and, as Paul Bloom wrote for the NYT in “The Moral Life of Babies”, across ages and experiences, there are some commonly held assumptions about proper conduct. We value fairness, we feel a responsibility to aid others in distress, and we shrink from inflicting arbitrary harm on a being that resembles ourselves. These are obviously vague precepts, and their application can vary a great deal best on what we judge to be fair or harmful or sufficiently like ourselves.  Our goal is to avoid applying the precepts wrongly, whether through ignorance or prejudice.

In my first class on ethics at CTY, the professor explained consequentialism to us with the example of two drownings. In the first case, a wicked tyrant drowned a subject out of spite, unaware that the subject was terminally ill and wished to take his own life. In the second case, a lifeguard came to the aid of a person s/he (wrongly) believed to be in distress, but, in fact, the lifeguard’s intervention caused the swimmer to drown. The outcome in the first case may be better than in the second, but I doubt any of us would deny that the lifeguard behaved better than the tyrant.

When we attempt categorize actions as right or wrong, we are similar to the subjects in the color study, trying to categorize specific shades as blue or green. Just as we are incapable of experiencing color as a precise wavelength, we do not have full access to all relevant data when we act. I don’t mean merely the facts of the case (the swimmer is/isn’t struggling), but the moral values that underlie those facts and inform us whether cessassion of life is harmful and whether the swimmer is worthy of protection.

Some of these values are arbitrary and contingent.  It is correct for me to show respect to my acquainances, but it matters little whether I show this respect by doffing my hat or inclining my head, as long as the message of intended respect is clear.  In Mere Christanity, C.S. Lewis argues that modesty is one of these contingent goods:

A girl in the Pacific islands wearing hardly any clothes and a Victorian lady completely covered in clothes might both be equally “modest,” proper, or decent, according to the standards of their own societies…When people break the rule of propriety current in their own time and place, if they do so in order to excite lust in themselves or others, then they are offending against chastity. But if they break it through ignorance or carelessness they are guilty only of bad manners. When, as often happens, they break it defiantly in order to shock or embarrass others, they are not necessarily being unchaste, but they are being uncharitable: for it is uncharitable to take pleasure in making other people uncomfortable.

We can behave morally and make mistakes about the precise way to perform these virtues (though we are expected to do due dilligence).  However, the values that are embodied through these varying practices (modesty, respect, etc) are not culturally contingent.

Most of our moral difficulties are in testing whether a cultural translation of a universal virtue is in accord with the spirit of the virtue.  Some seem reasonable, some questionable but not wrong enough to merit intervention, and some cultural practices are so manifestly abhorrent that we cannot imagine how a moral person could accept them.  This last category is usually related to the problem of who we define as fully human.   What does it say about our conception of women that marital rape was legal in all 50 states until 1975?

Blogged responses to the comments on the series so far will continue throughout the day, so do check back!

August 4, 2010 On what evidence?
Recent Comments
2 Comments | Leave a Comment
""Do you honestly think that a child raised by a woman has no exposure to ..."
Zorin 2012 Queer Blogathon [Index Post]
"I'd love to see a video of how it works. keranique shampoo reviews"
Marlene Garza Welcome Camels with Hammers to Patheos!
"Logismoi (the plural of logismos) are a fairly simple concept; they are whispers from either ..."
Rob, Portland Logismoi, Vampires, and Other Intrusive Thoughts
"I imagine I’ll do a lot more reading and pick a lot more fights over ..."
Donalbain A little about the queer stuff
Browse Our Archives
Follow Us!