“That his heels may kick at heaven” 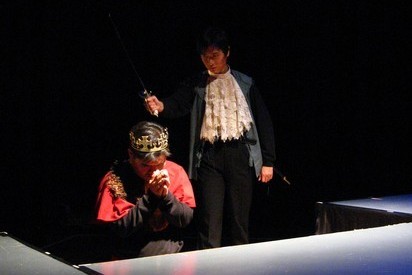 Some time ago, Hemant Mehta asked “Where are the atheist fiction books?” and I was kind of baffled by the question.  There may not be many books where the atheism of the characters is a major plot point, but when I was growing up, most books I read had no reference to religion at all, so I tended to assume the characters were all atheists like me.  Even in books where characters go to church, there were seldom theological influences on the plot — the church was just a public square where characters met and clashed.

There are exceptions, of course, but I haven’t read very many, and few of the ones I can think of are modern.  But the greatest counter-example I can think of occurs in Act III of Hamlet, when Hamlet comes upon his uncle Claudius at prayer and, over the course of a soliloquy, decides not to kill him yet (Brannagh version here).  Hamlet says:

Now might I do it pat, now he is praying;
And now I’ll do’t. And so he goes to heaven;
And so am I revenged. That would be scann’d:
A villain kills my father; and for that,
I, his sole son, do this same villain send
To heaven.
O, this is hire and salary, not revenge.
He took my father grossly, full of bread;
With all his crimes broad blown, as flush as May;
And how his audit stands who knows save heaven?
But in our circumstance and course of thought,
‘Tis heavy with him. And am I then revenged,
To take him in the purging of his soul,
When he is fit and season’d for his passage?
No!
Up, sword; and know thou a more horrid hent:
When he is drunk asleep, or in his rage,
Or in the incestuous pleasure of his bed;
At game, a-swearing, or about some act
That has no relish of salvation in’t;
Then trip him, that his heels may kick at heaven,
And that his soul may be as damn’d and black
As hell, whereto it goes. My mother stays:
This physic but prolongs thy sickly days.

Hamlet’s speech and subsequent action is predicated on a Christian metaphysics, but I struggle to think of anything less Christ-like.  The depths of Claudius’s sin makes him more pitiable and more in need of Hamlet’s help and love.  Hamlet certainly isn’t required to condone his uncle’s crimes, but he ought to try, to the extent that he can, to help his uncle repent.

Claudius fell through lust and jealousy, a sickly echo of love and honor.  He  wants good things (love, responsibilities) is the wrong way.  But Hamlet’s desire for the damnation of another person isn’t a twisted image of any good thing, there is nothing about this desire that could be rightly directed.  When Hamlet finally kills Claudius, he takes down his uncle in despair — Gertrude is dead, Laertes is poisoned, Hamlet is poisoned, and Claudius is complicit in all these deaths.  But, because he rejoices in the damnation of another soul, it seems like Hamlet must be the most distant from God in that moment.

And this is a big part of my concern in offering lethal resistance to someone engaged in wrongdoing.  Setting yourself in opposition to evil is good for you (not being complicit) and good for your nemesis (makes it clear that you find the action objectionable).  But a bullet to the brain doesn’t have much instructive content.  Even if you manage to avoid Hamlet’s failure of charity, what good do you want death to do for your enemy?

Protecting someone else from the consequences of the acts of your enemy is one thing, but I’m still not sure what kind of heuristic you should use to choose between martyrdom (which doesn’t preclude resistance) and cutting someone down when s/he is “about some act that has no relish of salvation in’t.”  On the other hand, this whole schema seems to place too much power over people’s souls in our own hands.  Hamlet might be called to be his uncle’s keeper, but it seems unlikely that Claudius’s salvation is wholly predicated on Hamlet’s antic disposition.

July 11, 2012 A Martyr for All Seasons
Recent Comments
192 Comments | Leave a Comment
"On that note... I recommend every Catholic and Christian have that post a read. Click ..."
Oktavian Zamoyski Effective Altruism and Caritas [Radio Readings]
"I think too many people have grandiose and unnatural ideas about charity. It becomes a ..."
Oktavian Zamoyski Effective Altruism and Caritas [Radio Readings]
"Jesus wasn’t resurrected as a great miracle simply in order to convince people to believe ..."
John The Two-Lazarus Problem
"The cartoon is amusing, but flawed. One of the four virtues of Stoicism is Justice; ..."
Vulpes Inculta 7QT: Stoicism Man, Semi-Imaginary Money, and ..."
Browse Our Archives
Related posts from Unequally Yoked