In today’s NYT Magazine, there’s an amazing story about forgiveness and the criminal justice system. Conor McBride shot his longtime girlfried Ann Grosmaire, and, after her death, her parents kept up their relationship with him.

Four days later, Ann’s condition had not improved, and her parents decided to remove her from life support. Andy says he was in the hospital room praying when he felt a connection between his daughter and Christ; like Jesus on the cross, she had wounds on her head and hand. (Ann had instinctually reached to block the gunshot, and lost fingers.) Ann’s parents strive to model their lives on those of Jesus and St. Augustine, and forgiveness is deep in their creed. “I realized it was not just Ann asking me to forgive Conor, it was Jesus Christ,” Andy recalls. “And I hadn’t said no to him before, and I wasn’t going to start then. It was just a wave of joy, and I told Ann: ‘I will. I will.’” Jesus or no Jesus, he says, “what father can say no to his daughter?”

She asked her husband if he had a message for Conor. “Tell him I love him, and I forgive him,” he answered. Kate told me: “I wanted to be able to give him the same message. Conor owed us a debt he could never repay. And releasing him from that debt would release us from expecting that anything in this world could satisfy us.”

The article goes beyond the personal feelings of the family, to talk about restorative justice – an extra-legal system that brings victims, perpetrators, and members of the community together to share their feelings and make consensus recommendations for sentencing.  Think of it as a small scale truth and reconciliation commission.  I really recommend reading the whole piece.

I was especially touched by Kate Grosmaire’s comment that forgiving Conor helped her let go of the idea that anything was going to compensate her for the loss of her daughter.  The court system is focused on justice, which can cause confusion and turmoil when true justice and peace is beyond the power of the courts to fine or imprison.  Better to admit that the civil law can help with deterence and safety, but can’t grant peace to the bereaved.

I was reminded of the New Yorker piece about a soldier seeking forgiveness from the family of a civilian he shot in Iraq, where the author noted that we lack traditions and rituals of forgiveness.  Restorative justice seems like a good start for secular society. 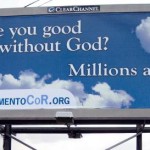 January 7, 2013 How is an atheist group like a bridge club?
Recent Comments
135 Comments | Leave a Comment
"Back to Square 1 ... ¯\_(ツ)_/¯Season 3!G.657BW.CO/d5573Y"
Bobby Klein My Good Catch Catches Them All
"We all are meme thiefes here 😂🙃fM.9226B.US/fA5573BU"
VanguardAI Books on deck for me for ..."
"To understand an art, you must understand phynomena."
Unlcuky13 I’m speaking about my conversion in ..."
"Despite the differences in level, it's still an excellent manga.pt.2632W.US/U5573xM"
Pilzkeks Dissecting the Catholic Vote for FiveThirtyEight
Browse Our Archives
Related posts from Unequally Yoked