What Do We Owe All the Valjeans? 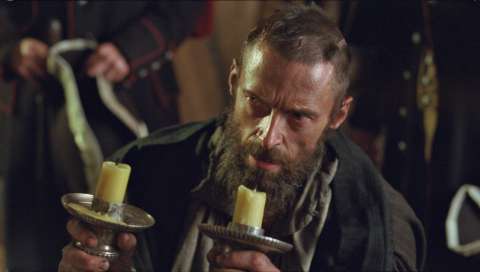 Since Les Mis seems to prompt endless reprises on this blog, you won’t be surprised to find I’m over at First Things today talking about Valjean, Javert, and what we owe to the prisoners in our criminal justice system.

When Jean Valjean appears for the first time in the stage musical Les Misérables, he is in the process of being paroled, and he is in an argument with his former jailer. When Inspector Javert barks out “You are a thief,” Valjean replies, “I stole a loaf of bread.” For Valjean, his crime is an action in the past, regretted and repented. From Javert’s point of view, the crime isn’t something Valjean did; it’s something he is, now and forever.

Our criminal justice system frequently takes the same view. Over five million citizens are denied the right to vote because they have committed a felony. Disenfranchisement is not akin to parole check-ins or other prudent defenses against recidivism. It is a denial of the former prisoner’s membership in the body politic.

When a prisoner’s sentence is finished, the debt between him and society is settled. The time served made restitution for the crime committed, so now the criminal justice system must reintegrate him into full participation in society. If prison does not prepare prisoners to become full, happy, healthy citizens, we have not held up our end of the bargain. The social contract and the bounds of civil society demand this much of us.

Go to First Things’s On the Square feature to read the rest of the essay and to find out which duties and relationships ask even more of us than the social contract.

As bonus content for the blog readers: I was struck by different things on my three viewings of the Les Miserables movie, but I was always particularly drawn in to the big forgiveness scenes (the Bishop with Valjean, Valjean with Fantine (and vice versa), and Valjean with Javert).  For the week after viewing number three, I kept returning to one line in the encounter between Valjean and Javert outside the barricade.

Valjean says to Javert: “You are wrong, and always have been wrong.”  It’s easy, on the page, to read those as words of condemnation, but, when well-staged (as it is in the movie), I think it’s clear that Valjean is offering this line as a gift to Javert.  Thinking about the lines reminded me of an article I’d read a long time ago in The New Yorker about the use of mirror therapy for phantom limb pain.

Among them is an experiment that Ramachandran performed with volunteers who had phantom pain in an amputated arm. They put their surviving arm through a hole in the side of a box with a mirror inside, so that, peering through the open top, they would see their arm and its mirror image, as if they had two arms. Ramachandran then asked them to move both their intact arm and, in their mind, their phantom arm—to pretend that they were conducting an orchestra, say. The patients had the sense that they had two arms again. Even though they knew it was an illusion, it provided immediate relief. People who for years had been unable to unclench their phantom fist suddenly felt their hand open; phantom arms in painfully contorted positions could relax.

Valjean isn’t blaming Javert for living in error, but he’s trying to draw his attention to the way he stands athwart the world, refusing mercy.  He’s inviting him to notice that he could live differently, that he might have the chance to unclench, that his constant feeling of opposition isn’t the natural way to be.

I kept coming back to this plea in prayer, particularly in my daily examen, to ask for the grace and desire to hear “You are wrong, and always have been wrong” where needed, and to accept this insight as a gift; the only possible way to avert: “…and always will be wrong.”

January 16, 2013
God and the Moral Law in Mormonism
Next Post

January 18, 2013 7 Les Mis Takes (1/18/13)
Recent Comments
102 Comments | Leave a Comment
"Jesus wasn’t resurrected as a great miracle simply in order to convince people to believe ..."
John The Two-Lazarus Problem
"The cartoon is amusing, but flawed. One of the four virtues of Stoicism is Justice; ..."
Vulpes Inculta 7QT: Stoicism Man, Semi-Imaginary Money, and ..."
"Do You Know what isn't Fair? Calling Atheism a Religion. Or saying Dawkins is a ..."
skwills Who Gets to Give the Courtier’s ..."
"Oh! And you can get there via Naval Gazing.(probably not by Navel Gazing...)"
TheSparksFlyUpward Too Sucky To Be True
Browse Our Archives
get the latest from
Catholic
Sign up for our newsletter
POPULAR AT PATHEOS Catholic
1