I’m keynoting at a Con for Christian nerds!

I’m excited to announce that I’ll be giving the keynote speech at this year’s Doxacon (a Christian convention on fantasy and science fiction)! Tickets are on sale now (and there’s an early bird rate, so if you think you’ll come, or you have a friend who would be interested, go ahead and book).

My husband (pictured above with me when we saw Captain America: Civil War) will also be speaking at Doxacon, and here’s what we’re both speaking on:

Leah Libresco—Wizardry and the Wounds of the World

Many fantasy novels see wizardry as a response to the woundedness of the world. Diane Duane’s Young Wizards series sees its wizards fighting entropy and offering healing, whereas Lev Grossman’s The Magicians trilogy has his heroes driven by anger at the brokenness of the world; their hatred for it is strong enough for them to reshape it. How does fantasy teach us to respond to the wound of original sin, and to join Christ in the work of making the crooked straight?

Marvel Studios created an unprecedented shared cinematic universe by taking once-lesser-known characters like Iron Man, Captain America, and Thor and weaving their stories together. Now, every other Hollywood franchise is scrambling to replicate Marvel’s model. But what sets the Marvel universe apart? In movies like Captain America: The Winter Soldier, the Avengers films, and Captain America: Civil War, the filmmakers grapple with the most profound themes of their comic book source material: power and authority. Who should decide how and when superheroes use their abilities? Who do these heroes serve and to whom do they answer? Taking on these questions makes the Marvel Cinematic Universe a mature piece of storytelling in a far more effective way than simply layering on a gritty tone. This talk will delve into how the Marvel Cinematic Universe grapples with the most important issues of super heroic fiction, including responsibility, idealism, and fascism.

Two of the panels we’re really excited to attend are Eve Tushnet’s (author of Amends) on “The Humiliation of Authority in Horror Films” and Rosamund Hodge’s (author of Crimson Bound) on “loving your enemy” and certain tropes of YA romance.

And, in the meantime, if you’d like to hear me and my husband geek out right now, we’re both on this episode of the First Things podcast, talking about faith and fatherhood in Logan.

April 24, 2017
How do you throw a fasting and silence party?
Next Post 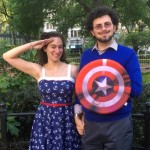