The Blues as “Secular Spirituals”: James Cone on B.B. King

Blues legend B.B. King died on Thursday, at 89 years, after an announcement several weeks ago that he was receiving hospice care.

This morning, I pulled out my copy James Cone’s The Spirituals and the Blues. Cone unpacks the historical context of the emergence of blues music, showing how it is both similar to and different from its antecedent in the spirituals, and then gives us a “theology of the blues” by connecting it to God, Jesus, suffering in the black experience, and to black eschatology–the particularized hope and anticipations of liberation and of heaven in black religion in the context of slavery and deep suffering.

In his intro, Cone writes:

No black person could escape the reality they expressed. B.B. King, Johnny Lee Hooker, and 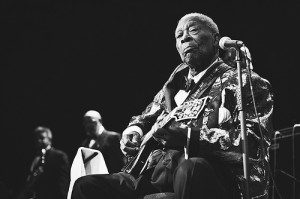 Mahalia Jackson created essential structures that defined my blackness. I affirmed the reality of the spirituals and blues as authentic expressions of my humanity, responding to them in the rhythms of dance. I, therefore, write about the spirituals and the blues, because I am the blues and my life is a spiritual. Without them, I cannot be” (7).

Cone describes the blues as a “secular spiritual”:

The blues depict the “secular” dimension of black experience. They are “worldly” songs which tell us about love and sex and about that other “mule kickin’ in my stall.” They tell us about the “Black Cat’s Bones,” “a Mojo hand,” and “dese back-bitin’ womens tryin’ fo’ to steal my man.” The blues are about black life and the sheer earth and gut capacity to survive in an extreme situation of oppression (97).

The blues, Cone explains emerged out of the backdrop of slavery, and are “closely related to the ‘slave seculars,” which were non- or even “occasionally anti-religious” songs (called “‘devil songs’ by religious folk”)

While seculars were not strictly atheistic as defined by modern Western philosophy, they nonetheless uncover the difficulties black people encountered when they attempted to relate white Christian categories to their situation of oppression.

And the blues, Cone explains, “reflect the same existential tension” as the slave seculars. They,

invited black people to embrace the reality and truth of black experience…Implied in the blues is a stubborn refusal to go beyond the existential problem and substitute otherwordly answers. It is not that the blues reject God; rather, they ignore God by embracing the joys and sorrows of life, such as those of a man’s relationship with his woman, a woman with her man (99).

As  “secular spirituals,” the blues differ from the spirituals of the slave experience in that they came out of a new situation of freedom: “the blues express conditions associated with the ‘burden of freedom'” (101). But the blues differed from western philosophical explorations of “freedom,” as in existentialism, by focusing on the “factual, not conceptual” aspects of the challenges brought by a new kind of freedom–which was still a limited freedom.

The blues, while not denying that the world was strange, described its strangeness in more concrete and vivid terms. Freedom took on historical specificity when contrasted with legal servitude. It meant getting married, drinking gin, praising God–and expressing these historical possibilities in song (101).

Cone moves on from there to unpack a definition of the blues and its function in black life, in relation to the particular experience of black suffering:

The origin and definition of the blues cannot be understood independent of the suffering that black people endured in the context of white racism and hate. Therefore, the question that gave shape and purpose to the blues was: How could black people keep themselves together, preserving a measure of their cultural being, and not lose their physical lives? … The blues tell us about black people’s attempt to carve out a significant existence in a very trying situation. The purpose of the blues is to give structure to black existence in a context where color means rejection and humiliation (110).

Suggestion: Buy Cone’s book and read it while listening to some B.B. King. Maybe you’ll have both a new appreciation for the blues–and for theology, too.

May 13, 2015
Five Metaphors for a Constructive Approach to Scripture: Responding to Scot McKnight
Next Post