Yes, I Will Cry When My Daughter Goes to Kindergarten 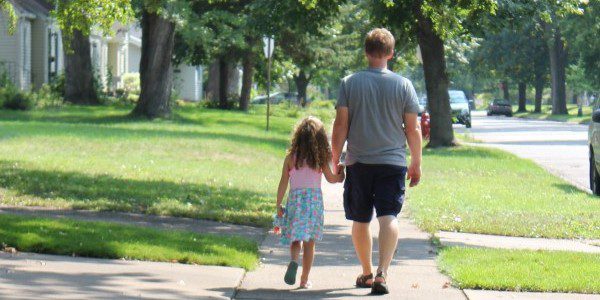 It’s pretty surreal. It’s hard to grasp the concept that in just a matter of hours, our little baby will climb the steps to that big yellowish bus — no doubt peopled with more than a few raucous “big kids” — and hop up on one of those green padded seats.

I imagine her sitting with nervous anticipation, a bundle of excitement and anxiety, glancing out the window here and there, taking in her new surroundings, analyzing her new bus mates, and having basically no idea what’s she’s in for the next 12-13 years of that crazy, beautiful, scary social experiment we call “school”

Tomorrow is the first day of the rest of her life.

As I’ve reflected on her first five years that brought us to this point, that Tolstoy quote has come back to me several times.

It’s been incredible to be her dad these past five years. To watch her go from a tiny bundle of nerves and dramatic energy, with those intermittent death-curdling middle-of-the-night cries, to the charming, funny, happy little girl she is today.

She’s a girl with hopes and dreams (it’s amazing how early those begin to be shaped), with likes and dislikes, with desires and fears.

Her little mind and body have already worked through so much of life.

She’s worked through some challenging spells of separation anxiety; she still doesn’t like mom to be gone for too long.

She’s learned how to fall asleep on her own. Before becoming a parent, I had no idea how significant an accomplishment that is.

She’s mastered that most challenging art of potty training.

She’s developed into a little symbolic, existential, spiritual creature; a human being who doesn’t simply respond instinctively to external events, but who expresses herself through language and participates in the meaningful vehicle of communication.

She’s come to love her earliest vocation: being a big sister.

She’s learned to draw and write and has the alphabet down pat.

She’s discovered death and grief. She helped us bury her “Oma’s” ashes.

In the grid of Erik  Erikson’s “stages of psychosocial development,”  she has learned to approach the world–and her interpretation of life–with “basic trust”–the inner sense of calm that life is basically reliable. She’s developed some autonomy and is learning–albeit in fits and starts–to exhibit both self-control and a sense of her own purpose. She’s already gone through three of Erikson’s eight stages.

She wonders about God, and prays with a freedom, authenticity, and innocence that I would love to experience again.

I could go on and on. But I hope I’ve made my point.

Tolstoy called the distance between birth and five “appalling.” In retrospect, “appalling” doesn’t seem like the right word. Remarkable, maybe? Inspiring? Whatever the adjective, a great deal has happened from the moment of her birth to the age of five–or to her first day of kindergarten.

But I shouldn’t neglect to mention the obvious: a whole lot will happen after that first day she boards the yellow bus, during the entirety of that life-span (“five to myself”) which Tolstoy called “but a step.”

But that’s all for another day.

Right now, I’m marveling on the big deal it is to become a kindergartner, a five-year-old little human being. Today is her first day of school, but it may just as well be her first graduation.

So reflecting about all that’s happened in her little body and mind, and everything that she’s already become, I’m pretty sure I’ll shed some tears when my daughter goes off to kindergarten.

August 28, 2015
Did Jesus Believe that Scripture is Inerrant?
Next Post