How Thinking About Death Could Impact Your Vote

How Thinking About Death Could Impact Your Vote March 16, 2016 Kyle Roberts

When you go to the voting booth in November, there’s a surprising variable that could impact your vote: thinking about death.

This is the finding of (among other researchers) Sheldon Solomon, Jeff Greenberg, Tom Pyszczynski, three empirical psychologists who (among other numerous other  researchers) have spend decades testing and confirming the theories of anthropologist Ernest Becker.

Carey Goldberg has just published an interview with Sheldon Solomon. The piece provides an excellent overview of Becker’s main thesis as well as an overview of the decades-long effort by researchers of “Terror Management” to test Becker’s theory.

In his 1973 book, The Denial of Death, Becker argued that both the blessing and the curse of humanity is our ability to existentially reflect on the inevitability of death. We are mortal; the Grim Reaper chases us all down, one way or another. (For more of my posts on Becker and Terror Management Theory, see here and here.)

That awareness of our mortality–and the often subconscious repression of that awareness–is at the root of so many things in the human experience: both beautiful and terrible. Death awareness creates in us a “terror” of our mortality and results in a myriad of efforts, both conscious and non-conscious, of dealing with that terror. Sometimes we deal with it constructively and other times we deal with it destructively. It’s the destructive ways of coping that demand attention. In the interview, Solomon explains:

Whenever people are reminded of death, they love people who share their beliefs and they hate people who are different. They sit closer to people who share their beliefs and they sit further away from anyone who looks different. And if we give people in a laboratory setting an opportunity to physically harm someone who’s different, after people are reminded of their mortality they become much more hostile and vicious.

But one of the most intriguing (and currently relevant) ways that our awareness of death/mortality impacts us is in our voting habits. As Max Weber observed, people are more likely to vote for “charismatic leaders” in times of turmoil and sociopolitical upheaval. But as Becker and the Terror Management Theorists have also shown, people are more likely to cast their vote for a charismatic leader who promises protection against death and who assuages their existential (and real) fears relating to the precariousness of their mortality.

Solomon provides a telling example of a study of voters prior to the 2004 election who were far more likely to vote for George W. Bush, after being reminded of death (prompted by “death reminders”), than the control group–those who were not reminded of death. Solomon explains:

We were frankly astonished, because Americans in a benign state of mind, in a control condition, were not enthusiastic about President Bush and his policies in Iraq. But death reminders consistently increased his popularity. The most glaring example of that was a study that we did five weeks before the 2004 election. It was at Rutgers University with American citizens who were registered to vote and intended to vote. We randomly divided them into two piles: half were reminded of their mortality, the other half of something unpleasant, and then we just basically said, ‘Who do you intend to vote for in the election five weeks from now? Secret ballot, we’re not asking you to tell us.’

Those effects are real today, too. Solomon and other researchers are looking at the impact of death anxiety and death reminders on current voting habits and political preferences. They are observing similar impact on voting preferences as they did in 2004. Solomon, again:

…we did a study in September and October in Staten Island, where once again we asked some people to think about their mortality and other people to think about something unpleasant. And we found the same thing as in our 2004 President Bush studies, and that is that in response to a death reminder, people reported being more supportive of Mr. Trump and more willing to vote for him.

Solomon urges that there is no “bipartisan stake” behind the studies. And he also points out that promises of protection to potential voters is politically expedient and typical, no matter the candidate and the party. But the reason for focusing on Trump as Weber’s “charismatic” candidate, who offers voters protection from all manner of ills and evils, is pretty self-explanatory.

Could it be that one explanation for the popularity of Trump is our desperate search for protection from the rumble of terror underneath; from the fear of our mortality? Are many Americans looking to a hero to, not just “make America great again,” but to assuage the all-too-human fear of death?

For more about Becker and Terror Management Theory, see The Worm at the Core and In the Wake of 9-11: The Psychology of Terror.

March 14, 2016
On Exorcism and Healing: What Should We Think of Jesus' Miracles Today?
Next Post 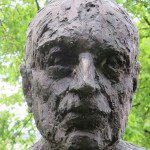 March 17, 2016 The Most Misunderstood Quote in Modern Theology (Guest Post by David Congdon)
Recent Comments
0 | Leave a Comment
"Good points. It is not wrong to love your country and do what is best ..."
Done with Religion When Churches Conflate Christianity and Nationalism ..."
"Well, you are misguided. Do you think you can figure out this God? If so, ..."
WitBrown Mother God: What Are We Doing ..."
"Obviously, you are missing the fact that The Creator God is sovereign and stands above ..."
WitBrown Mother God: What Are We Doing ..."
"A god so limited as to be gendered is too small to bother with."
Kyllein MacKellerann " Mother God: What Are We Doing ..."
Browse Our Archives
get the latest from
Unsystematic Theology
Sign up for our newsletter
POPULAR AT PATHEOS Progressive Christian
1

What if life wasn't just a...
slacktivist
Books by This Author Books by Kyle Roberts