If God is Good, Why do Animals Suffer?

If you accept the theory of evolution (and you should) then you also must accept the brutal truth that over 98% of all animal species in the 4 billion-year long history of life are now extinct. 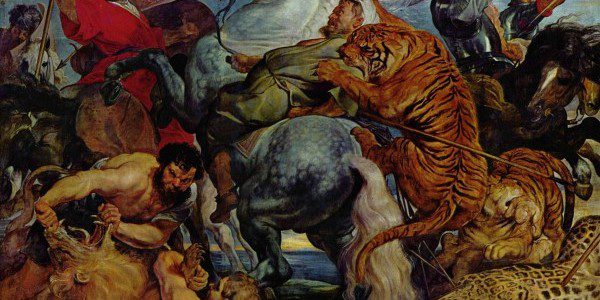 That’s a lot of death. A lot of evolutionary waste. A lot of suffering, too. How many of those animals perished while experiencing pain? How many died young?

Predator and prey. Nature red in tooth and claw.

And obviously, it’s all still happening. Very often at our own hands–though we carnivores prefer not to think about it–and sometimes simply because of our own foolishness.

And we’ve not even arrived yet at the problem of human death and human suffering.

Christopher Southgate, in his insightful book, The Groaning of Creation, takes on the theological problem of evil in the context of evolution. He focuses specifically, though not exclusively on the problem of non-human animal suffering. This problem is in some ways particularly acute because of our common assumption of the fundamental innocence and “amorality” of animals. But it’s also particularly weighty because of the sheer magnitude or scale of the history of death, extinction, and suffering.

How can theists square the existence of a good God (benevolent, loving, wishing no harm to befall creatures, etc.) and a powerful God with the reality of so much death and suffering? And how does evolution, with all its apparent randomness and cruelty, mesh with believe in divine providence?

Or as Darwin wondered, how can you believe in God while watching a cat torment a mouse, before killing it?

Southgate’s response to the problem is multi-faceted, thorough, but also appropriately humble.

He argues that evolution was the “only way in which God could give rise to the sort of beauty, diversity, sentience, and sophistication of creatures that the biosphere now contains.” (p.16). He also admits, by the way, that this argument cannot be proven. But evolution is not complete; it continues on, with all its imperfections, pains, and wonders and beauty too.

In a move that’s reminiscent of a “best of all possible worlds” argument, evolution was the only way to give rise to the kind of life and world we now have–culminating in sentient, free-willing human creatures, who bear responsibility for “cooperating with their God in the healing of the evolutionary process.” (p. 16).

He also believes that God is not distant from creation, but suffers with it and in it most centrally through the cross of Christ.

And he affirms a key point that the suffering and death in creation’s history is not the end of the world, but that an eschatological fulfillment awaits–a new creation. This is crucial because “a God of loving relationship could never regard any creature as a mere evolutionary expedient.” (p. 16).

Christian hope is grounded in the idea that suffering and death will come to an end, and that suffering does not have the last word. The Eschaton is the promise of that continuation of creation, and that those who have been cheated out of goodness will not forever be so.

The book’s title, The Groaning of Creation, comes from Paul’s words in Romans 8:19-22. On this curious passage, Southgate offers an “admittedly speculative reading,” that the “futility” to which creation was subjected by God is the “futility of the evolutionary process.” (p. 94).

I agree with Southgate that, while Paul clearly did not have evolutionary theory in mind when he wrote Romans, it’s a valid, imaginative and theological reading of the text, from our perspective today. Theology must account for the world to the extent to which we actually now know it. It makes sense to creatively appropriate Paul’s words in this new light–while acknowledging that the apostle Paul was no Darwinian.

It’s a stirring picture of hope, to imagine that the long story of evolution, with its ambiguous mix of struggle, pain and death as well as change, transformation, and life–would evolve through a stage of final healing and ultimate redemption.

I admit that this hope comes and goes, it flickers in and out (these days, maybe more out than in). But this hope has always been, to my mind, one of the more beautiful images of Christian faith.

To conclude, via Southgate:

I propose, then, that the evolutionary struggle of creation can be read as being the “travail” to which God subjected creation in hope that the values of complex life, and ultimately freely choosing creatures such as ourselves, would emerge. It is, as Paul’s language hints, a struggle that gives birth. It is a struggle in which humans and the nonhuman creation groan together, in which humans share by hard work in giving birth to new possibilities of life. (95).

May 22, 2016 The Feminist Trinity
Recent Comments
0 | Leave a Comment
"Thank you for these recommendations!The Bible and every other book of relational testimony is never ..."
Herm Recommendation: A Christmas Book for Progressive ..."
"I suppose it does matter whether it really happened the way the legends say, but ..."
jekylldoc Recommendation: A Christmas Book for Progressive ..."
"Try teaching so as to challenge any of the structural and historic racism in this ..."
Michel To Better Understand the Destructive Myth ..."
"And below a perfect example of the obnoxious dogmatist. Too bad so many atheists are ..."
Michel Book Talk: How Millennials Can Lead ..."
Browse Our Archives
get the latest from
Unsystematic Theology
Sign up for our newsletter
POPULAR AT PATHEOS Progressive Christian
1