A new review of Visions of Vocation

A new review of Visions of Vocation September 2, 2014 Patheos Faith and Work Channel

Many of you already know of Byron Borger’s brilliant book review blog, Hearts and Minds Booknotes.  It’s part of a truly different Christian bookstore, Hearts and Minds, which tries to serve serious readers and serious Christians:

Welcome to a bookstore which attempts to create a new space for serious, reflective readers. Unabashedly Christian, we are often told that we are different than most religious bookstores. Our name, we trust, gives a good first clue to what we are about.

What distinguishes us most is our enthusiasm for the development of a uniquely Christian worldview where Christ’s Lordship is honored and lived out in relevant ways in the midst of our highly secularized, post-modern culture. We offer quality books for the sake of faithful Christian living. We serve business folk, scientists, artists, college students, moms, dads (and kids!), pastors, poets and politicos. We believe Biblical faith leads to “thinking Christianly” about every area of life.

If you haven’t been following either, go check them out.  Recently, Byron put up an extensive review of Steve’s Visions of Vocation.  It also includes an extensive run-down of other resources on faith and work–and a link to Byron’s whole bibliography on the topic. (“Astounding” is the word that occurs to me–enough reading material here for decades!) 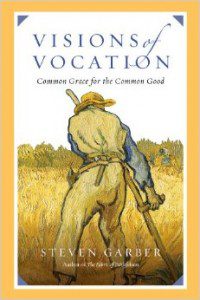 Here’s some of what Byron has to say about Steve’s book:

Steve, without using much of the breathy rhetoric and lingo to which I so often resort, stands in the tradition(s) that have helped evangelicals learn to speak so passionately about cultural engagement, social change, and a long-term vision of living with integrity “in the world but not of it.” He reads Kuyper, Al Wolters, N.T. Wright, writes for Comment magazine, The High Calling blog and more. Steve is humble, increasingly an older, capable friend to rising leaders, trusted because he himself has been guided by some of the best evangelical leaders of the previous generation, those that have held together solid theology, deep piety and prayer, and a non-partisan, sensible, radical Christian view of life and times. From Francis Schaeffer and Os Guinness to J.I. Packer and John Stott, Steve has been informed by lasting friendships with important leaders.

And, he reads widely, carefully, delightfully, even, awed, often, by good lines from Dickens and Marx, Walker Percy and Camus, Chaim Potok and Wendell Berry, the contemporary novels of Thomas Wolfe and classics like Victor Hugo and, always, the poetry of Steve Turner. For those who want to know these things, he often cites Church of South India missionary Leslie Newbigin and Jewish Biblical scholar Abraham Heschel. I love a guy who quotes Dutch Calvinist Geerhardus Vos and the famous British Archbishop Rowan Williams, the Lutheran intellectual Jean Bethke Elshtain and the poetry of Madeline L’Engle.

So, Garber gets it. God cares about all of life, we must move from thinking about worldviews to embodying restorative ways of life, and we do that over a lifetime of being shaped by worship and Word, reading and talking, slowly and carefully, drinking deeply from the deepest wells, renewed so that we can be the people God calls us to be in this creation being restored.

He has three more reasons he likes the book, too. You’ll want to check them out.  (One, it must be said, is Steve’s stories:)

I mentioned that he tells good stories, and that they aren’t cheap little inspirational nuggets gathered from some writer’s anthology of neat illustrations. Steve walks alongside people — medical researchers stationed in Africa, movies stars stationed in LA, college students stationed in Ivy Leagues colleges, mothers pondering the art and vocation of caring for families — and the stories he tells of them are inspiring and, frankly, somehow extraordinarily meaningful. He has a way of underscoring and illuminating the dignity and meaning of the struggles of these brave folks to serve God where they are, even in their own brokenness. I cannot put my finger on it, but Garber sees into the holy reality of these friends of his, and tells their stories in ways that capture dignity and purpose.

From his pals in Jars of Clay (and their Blood:Water Mission) to his friend Hans who started

an environmentally-sensitive burger chain using organic ingredients and grass-fed cattle to a Korean friend who works at the World Bank to a Lawrence, Kansas, carpenter guy, a former student of his who now owns his own small construction business, rebuilding homes with integrity, stories are shared as examples of people who are intentional about their live’s callings and the fidelity needed in that arena or responsibility. In each case, these folks have stepped into a way of doing their work that starts with deep knowing. He describes one as a person with “a seriousness about things that matter and a softness of heart.”

One story he briefly tells is of a school teacher who struggled with the deep implications for education found in C.S. Lewis’ The Abolition of Man. Another is of a white South African, now in the states, who tells of his journey towards political action for public justice by his regular reading of the Psalms; yet another friend he tells us about is an Anglican priest who is recasting his vision of ministry, learning to be a pastor to people who take their work and public life seriously. Another couple has a gift of hospitality, serving good wine with good laughter among friends and guests.

Check out the review (and then check out the book!  It’s on sale right now for 20% off at Hearts and Minds.)

September 5, 2014 A pilgrim in the ruins
Recent Comments
0 | Leave a Comment
Browse Our Archives
get the latest from
Best of Patheos
Sign up for our newsletter
POPULAR AT PATHEOS Faith and Work
1