It feels like a transfer of power is happening.  An older generation is giving way to new generation.  Youth familiar with school shooting drills are able to vote.  High-school graduates are holding baby boomers to account for the America they are inheriting.  Has America ignored their parents?  Parents who lost kids in these shootings?  And not just mass shootings, but also teen suicide?  How has the structure of America allowed this to happen?

RAWtools just got back from an event in Philadelphia called, “Demand The Ban.”  Organizers Heeding God’s Call, DELCO United, The Simple Way, and the Charles Foundation asked RAWtools to make a garden tool out of an assault style weapon which they would attempt to give to Senator Toomey.  If they weren’t given an audience with Toomey or his staff to discuss legislation before congress to ban/limit assault style weapons, they were going to sit-in until they were.  Eventually they were arrested and released later that afternoon.

While we made the garden tool, the voices that have been affected by gun violence shared their stories.  Movita Johnson-Harrell shared how her son was killed in a case of mistaken identity.  After moving out of the city to escape violence, her son was killed while picking up his sister.  Laurie Works shared about losing her two sisters in the New Life Church shooting.  A rabbi, Reverend, and Muslim shared how their communities are affected by gun violence and that it is a deep part of their traditions to be peacemakers.  All the while you cold hear the pings of the anvil as a gun barrel became a garden tool.  The voices of the victims of gun violence were ringing out.

The day before the event Mrs. Johnson-Harrell thought she would see what the process of buying an AR-15 might look like.  So she went to a gun store and bought one.  Four and a half minutes after her background check cleared, she walked out of the store with an AR-15, a magazine, and a free gun case (no ammunition).  No training required (although she does have a conceal carry permit, also to know the process-she does not carry a weapon).  No requirement for safe storage.  We made it inoperable at the event the next day. 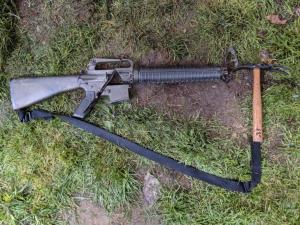 As followers of Jesus we are compelled to act like Jesus.  This life demands us to live in such a way that guns aren’t necessary to our survival, let alone daily life.  Specific to assault style weapons, there is nothing about killing as any people as possible, as fast as possible, that looks like Jesus.  The light weight and ease of use of an AR-15 make it attractive to buyers, not its ability to serve communion. 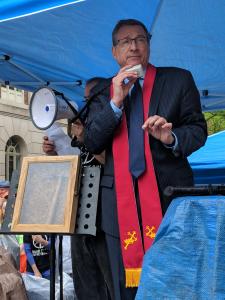 Rev. Rob Schenck also spoke at Demand the Ban, noting that Sen. Toomey attends his parish when working in DC.   Rev. Schenck is at the center of Abigail Disney’s Armor of Light film.  In Philly he spoke of being pro-life and how that extends to gun violence, death penalty, and war.  He mentioned that gun violence in America should tug at the christian conscience, including Toomey’s.  He brought up a toy gun with an orange tip and mentioned that toy guns have more regulations before they can be sold than real guns.

Toy guns steal our kids’ imagination.  a couple weeks ago I was with my son at the park across the street.  Kids were playing on the playground.  Several were laying in random places and one was racing to each one.  As we got closer I heard them pretending to be shot in a mass shooting.  Another time at the park they had their Nerf toys without the darts, pretending to shoot each other, saying “you’re dead!”  They would count to ten and then get back up and continue playing.  I did this with squirt guns growing up.  I would guess most of us did.

Our legislators are failing the younger generation and its taking tragedies from Columbine and Sandy Hook to Parkland and Santa Fe to create a movement.  The kids are leading us now.  These kids aren’t playing with toy guns.  Their imagination is fixed on changing a system.  We are living in a world where youth are demanding adults to make a change.  Our faith groups need to be a part of this, either leading it, or providing the safe space for it to happen.

It means the adults haven’t been looking very much like Jesus. The examples of adults must do more to compel us toward a plowshare and away from a sword.  If its too late for us, we must make way for those after us.  Pain is being brought to speech.  If we don’t listen, it too, will find other ways to be heard. 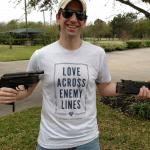 Why Biblical Literalism Leads to Biblical...
Glorious Life
Related posts from Voices of RAWtools: Forging Peace in a World of Violence