In Afro-Caribbean Religions like Voodoo, Vodou, and Lukumi or Santeria the true spirits of Halloween are the ancestors. Festivities run from October 30th to November 2nd. There are delectable dumb supper feasts, elaborate ancestors altars and offerings galore. It’s a time for reconnecting, remembering and honoring all those who have gone before. It is their blood that runs through our veins, they are the primary reason we are here.

Specifically in Haitian Vodou and New Orleans Voodoo we also feed the dead known to us as spirits called Les Baron and Les Gede. The Barons are seen as being representative of spirits of the named dead and they bear exciting titles like Baron Samedi, Baron LaCroix, and Maman Brigitte. Baron Samedi is probably the most widely known of the bunch, popularized on the silver screen by Geoffrey Holder in James Bond’s Live and Let Die. He is frequently depicted with a top hat and sunglasses with one eye piece missing. This is to symbolize that he is looking into the world of the visible and the invisible at the same time. Many practitioners view him as representative of the first male buried in any cemetery and offering are frequently placed there. Even more lively and lascivious than the Barons are the Gede, the unnamed dead whose monikers were lost in the seas of times past. All of these spirits are traditionally offered rum, chocolate, coffee, fruits, cigars, cigarettes and other specific items. These would be appropriate to include as part of your ancestor fare this year, and if you like you could whip up my recipe for Sweet Potato Mash with Bourbon and Pecans or New Orleans Voodoo Coffee to add too.

I remember sitting in one of my undergraduate anthropology classes and my professor, Dr. Susan Johnston asked a simple question, “How many of you know the names of all four of your grandparents?” Only myself and one other student answered, and his family came off the Mayflower. I was shocked and surprised. History, names, wisdom, it is all so quickly and easily lost. Please do me, yourself, and the dead a favor this year and take the time to remember them in a special and sacred way. For more great recipes please check out my African-American Ritual Cookbook.

Lay It Down, Dumb It Up: The Dumb Supper Feast

The famous poet Ogden Nash once said “Too clever is dumb.” It think one of the cleverest things anyone can do during this Samhain/ Halloween season is to hold a feast for the ancestors. Traditionally at this time pagans of all traditions hold a dumb supper. Most simply put this is a meal laid out for the ancestors and left for them to consume in silence. There is much lively debate as to the origins of this custom, and like may great ideas it most probably sprang up in many different cultures at once: Scottish, Irish, Pan-African, Pan-Asian, and more. Actually if I turn my anthropologist’s brain towards the problem I realize modern western culture is probably the only place that the custom of feeding one’s dead has virtually disappeared. But that is a blog for another day. It makes sense both logically and intuitively to feed one’s ancestors. My best advice is to feed them the foods they loved in life.The following is a version of my dear friend Cayne’s Kale Salad. Cayne was a Voodoo practitioner, and an all around lovely person, who was taken from us too soon. She loved to make this salad, and I am honored to share it here with you.

juice of one lemon

salt and pepper to taste

Work Kale between your fingers, adding all items except the onion. Massage ingredients together until Kale is soft, about 5-10 minutes. Add onion, refrigerate for at least one hour. Enjoy.

October 26, 2013
Ten Worst Voodoo Films of All Time
Next Post 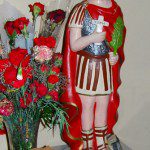 November 1, 2013 St. Expedite: The Patron Saint of Hurry Up
Recent Comments
0 | Leave a Comment
"merry meet, Dig It!...Blessed Be...daniel"
daniel schwendinger Sensational Samhain Song Selections From Your ..."
"I was doing some reading, and I read shungite is a good stone for protecting ..."
Amanda Ingalls What To Do About Psychic Vampires ..."
"Thank you so much and thanks for reading !"
lilithdorsey The Witchies Results Are In … ..."
"Congratulations!"
WildestSea The Witchies Results Are In … ..."
Browse Our Archives
get the latest from
Voodoo Universe
Sign up for our newsletter
POPULAR AT PATHEOS Pagan
1

An’ it Harm None, Do What...
Beneath the Moon
Related posts from Voodoo Universe