Mojo, Juju, Mumbo Jumbo- What Does It Mean?

I love words. I sleep with a dictionary next to my bed. I collect antique dictionaries. They get me hot. Well, maybe not literally, but words are a key to our past, a doorway to understanding and meaning that we use everyday. Even my path of Eleggua in Santeria (Lukumi) is all about words, which came as a surprise to both me and my godmother, when we saw the divination results. I love to dance and move so much that everyone thought I would have those qualities ruling my spirituality. But then the thought came, like a revelation “There are always words.” When you dance there are words in your head, maybe words in the music, words people are speaking around you, always words. Even when we sleep there are words in our dreams, sometimes we even speak them. My best friend said to me once over the phone(after she had apparently fallen asleep) “ There is tuna between us.” That has to be my favorite mysterious sleep talk. The world of Voodoo has a lot of mysterious words and many have found their way into our waking speech today.

Words from beneath the ocean, across the seas, from the stars….

Many of the mysterious words of Voodoo originate from West Africa, brought to other continents across time and tide literally in some cases. Some must have traveled across the oceans, whispered in cargo holds by slaves counting on their Mojo, their Juju, and hoping Mumbo Jumbo would save them. In New Orleans Voodoo and Haitian Vodou cosmology there is a belief that the wisdom of the ancestors comes from both the depths of the ocean and the farthest stars. This is a continuing line of knowledge that comes from below passes through us, and then takes off to the stars. Then the whole thing cycles back again in a divine spiral. This is what happens with the words of yesterday, today, and tomorrow.

The Yoruba of West Africa have a sacred word, Mojuba which means simply Thank you. The origins of the word Mojo lie here. The Mojubas are prayers that are uttered to the divine thanking them for their glory and powerful guidance. Over the years this has drifted towards a more modern definition meaning power and magic in general. There is Mojo Jojo from the Powerpuff girls, the popular Mojo magazine, Austin Powers sexual mojo, Paleontologists have recently even named a dinosaur Mojoceratops, but then in keeping with the Christmas season there is a Ba Humbugi snail. People are strange. Most people know that blues musician Muddy Waters got his Mojo Working. Then there are classic bands like the Doors singing about the anagram of Jim Morrison’s name “Mr. Mojo Risin’,” and amazing more recent talent like Ten Ton Mojo ( follow them on twitter.) Mojo is everywhere.

Ju is the Yoruba word for throw. This obvious root of the word Juju comes from the custom of throwing herbal spells and fetishes at people as a method of spiritual delivery. Some also attribute it’s use to the Hausa people. There is an amazing piece  by Bill Casselman about the Oxford English Dictionary falsely attributing juju and gris gris to the french language despite their obvious African roots. Over time this word has evolved to mean the energy, or what Voodoo practitioners would call the Ashe of a place. There is definitely bad juju and good juju and this has found it’s way into urban legend in the form of monkey paws and rabbit’s feet respectively.

The most widely accepted history of the phrase Mumbo Jumbo is that it refers to a masked ritual where people would be publicly punished for their indiscretions. But you may be thinking wait doesn’t Jumbo means big like the elephant. Well, actually Barnum was told the elephant was named Jumbo, which was probably a bastardization of the Swahili word Jambo, which means Hello, and was very likely one of the few words the foreigners has retained from their journey to obtain the animal. The first print appearance of the words Mumbo Jumbo was in Travels in Africa written in 1738. It is described here as a “Mundingo (Mandingo) idol. “ An supplement to the Encyclopaedia Britannica in 1803 describes a strange custom in which a masked dancer would come in the darkness and a ritual would occur. These sound similar to the Egungun masquerades that occur even still today. My favorite literary reference to Mumbo Jumbo is in Ishmael Reed’s fictional book of the same name. He supposes that Mumbo Jumbo at one time meant divine ancestor wisdom. Seems like when we were young our elders were just speaking Mumbo Jumbo anyway. Maybe age has taught us to listen better and speak wisely. If you have a chance please leave your own Mumbo Jumbo in the comments below, I’d love to hear what you think. 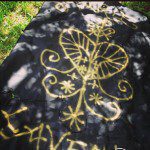 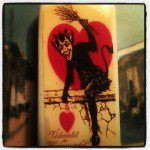 December 22, 2013 Krampus Is Cool This Christmas!
Recent Comments
0 | Leave a Comment
"It's a shame the art department didn't realize they were putting two right hands on ..."
Laurie Review: Manifestation Magic By Elhoim Leafar
"The only one I heard was the Christian dogma spouted by the 700 Club (which ..."
Amanda Ingalls Taking A Look At The Top ..."
"These are a bit like Turkish war shirts, which are covered with sigils. There's even ..."
Gordon Cooper Hoodoo How We Do: Underwear Spells
"Do you have to wear the panties/boxers when writing the name of the person<spoiler>"
Victoria Jenkins Hoodoo How We Do: Underwear Spells
Browse Our Archives
get the latest updates from
Voodoo Universe
and the Patheos
Pagan
Channel
POPULAR AT PATHEOS Pagan
1