Legba Is Different From The Barons: We All Look Alike to You?

There are a lot of divinities, or Lwa, in the Voodoo pantheon — some say 101, some say 401, some say as many as you can imagine and then add one more. There are legions of spirits, each one unique and sacred in its own blessed way. Everyone has the potential to become divine, and that is one of the most beautiful things about the religion.

My last post, where I spent less than a paragraph discussing American Horror Story: Coven, sparked a lot of attention. As a reply to a comment, I stated that I will continue to write about the reality of Voodoo and Afro-Caribbean Paganism in a respectful and accurate manner. I have been doing this for over 21 years and have no intention of stopping now. As much as I hope people can know and understand the difference between a television portrayal and an ancient and honored spirit, the reality is some people do not have access to resources that would present them with a more truthful reality. This week’s episode seemed to portray a confusion between representations of Voodoo deities. To that end I am going to explain the difference between the Lwa Papa Legba and the group of spirits known as Les Barons and Les Gede.

Legba leads the pantheon. No message can reach the world of the spirits unless they pass through Legba. Voodoo devotees pray “Papa Legba Open the Door.” This is the door to magic, to other realms, to the divine, to the truth. Some times Voodoo practitioners will knock three times to gain the attention of this spirit. He is honored first and foremost in any ritual because he is our wise guide to these worlds. He holds our hand and leads us down our proper and unique path. For more information about Legba, please see my post The Voodoo Truth About Papa Legba.

Barons Living in the Past

The Barons and the Gede are the ancestor spirits of the dead in Haitian Vodou and New Orleans Voodoo tradition. My spiritual house views the Barons as the named dead, and the Gede as the unnamed dead. The Baron Cimetiere or Samedi is seen as the first male buried in the cemetery. Therefore each location has it’s own private Baron ruling over his domain of the dead. The most popular images of this deity show him wearing a top hat. In the New Orleans Voodoo Tarot, Louis Martinie  and Sallie Ann Glassman write of Les Gede,“Lusts bright ember shines within the darkness of the grave.” These spirits know the sacred connection between sex and death. During ritual a traditional rhythm called the Banda is played for the Barons and the Gede. It is a lively, fast paced rhythm that will “wake the dead.” My godmother Bonnie Devlin’s amazing rendition can be found here. 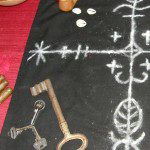 January 10, 2014
The Voodoo Truth About Papa Legba
Next Post 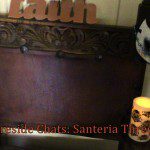 Pagan
My Indian Red: An Anthem Of Roots And...
Voodoo Universe
TRENDING AT PATHEOS Pagan