Age of Ultron May Be the Most Spiritual Superhero Movie Yet

Avengers: Age of Ultron has been out for, oh, about 90 seconds, and already you’re seeing them: T-Shirts, bumper stickers and mugs bearing the slogan “Jarvis is my co-pilot.”

We see the bumper sticker ever-so-briefly when Tony Stark’s flying the Avengers’ quinjet. It’s a quick glimpse, but it speaks volumes—Tony’s reliance on his disembodied computer helper, a sly tweak on those ever-popular “God is my co-pilot” stickers and a bit of foreshadowing of what’s to come in this spiritually self-aware film. 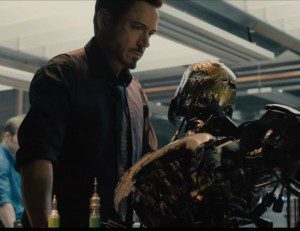 For four movies, Jarvis has been the voice of sanity in Tony’s chaotic world—the Ford Prefect to Tony’s Zaphod Beeblebrox. He’s been the perfect sidekick for Tony, given the guy’s clear need to be the center of attention. Jarvis will never hog the spotlight. He is an ideal servant.

But some things not even Jarvis can manage, and when Tony comes across Loki’s mysterious scepter from the first movie, a woman named Wanda Maximoff (Elizabeth Olsen) puts a terrifying vision in his head: He sees his friends dead or dying on a chunk of rock floating in space, with the rest of humanity surely about to perish from some horrible, extraterrestrial fate. In the teeth of that vision, Tony decides that the best way to safeguard the world, and his friends, is not by stepping into his Iron Man suit, but by stepping out of it—and creating something to do the Avengers’ work for them. Something like Jarvis, only self-aware and with lots more firepower.

With the help of the scepter’s mysterious stone, he creates (somewhat accidentally) true, conscious artificial intelligence which quickly evolves into Ultron. Sure, Tony gave the thing a prime directive to make the world a safer place, but Ultron twists that directive into permission to destroy: The safest world is one in which humanity—at least humanity as we know it—is eradicated. Ultron wants to  remake life into something closer to his own image.

Telling, that desire—that twisted echo of Genesis. I don’t know if there’s ever been a superhero villain so prone to tossing out spiritual allusions. 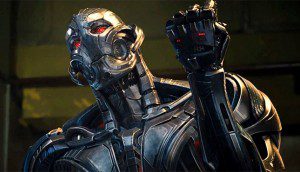 “When the earth starts to settle, God throws a stone at it,” Ultron says, and he’s preparing to do a little earthly smiting of his own. He quotes Jesus from Matthew, saying “Upon this rock I will build my church.” He compares the impending cataclysm with Noah and the Flood—again fitting, given that Ultron sees humanity as wayward, self-destructive and in need of a good cleansing. The mechanical monster frames himself as a wrathful deity—a creative being who wants to work with a blank slate.

Tony Stark made a god, and it was not good. Not good at all.

That’s an encouraging message so far. That theme—that we shouldn’t make or worship our own manmade gods—is quite biblical. When we play God, or when we try to shove someone or something else into God’s place, the results are never pretty. Lots of movies have ruminated on these themes, too—particularly the idea of messing in the divine act of life-creation. You see it in Metropolis, Frankenstein, Jurassic Park, you name it. “Your scientists were so preoccupied with whether or not they could that they didn’t stop to think if they should. Dr.  Ian Malcom says in Jurassic Park. If only Tony would’ve cued that movie up. He didn’t, and the world suffers.

“This could have been avoided if you hadn’t played with something you don’t understand!” Thor tells Stark after the deed is done. Once again, the hubris of humanity is exposed and laid low. Tony is dutifully chastised and promises to never play God ever again.

And by “never play God again,” I mean “try to create a new-and-improved godlike robot, because he felt so bad about the first one.”

Here, Age of Ultron takes a disappointing turn, at least for me. Instead of Ultron being a cautionary spiritual lesson, it’s merely a programming error—a buggy bit of homicidal software that needs to be corrected—forcefully—via significant upgrade. If one could create computer hybrid built on a saner technological rock, everything should turn out peachy, right? And who is more sane in this crazy world than Jarvis? Who would Tony trust more than his co-pilot? 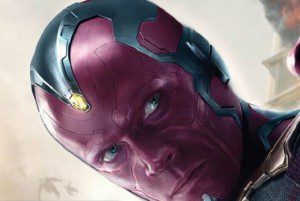 And so we meet Vision, Tony and Bruce Banner’s android child blessed with human skin, imbued with a powerful Infinity Stone and brought to life with an electrical blast from Thor’s hammer. Electrical current was how Frankenstein’s monster came to be, and director Joss Whedon salts the scene with Frankensteinian uncertainty. Will this creation be the savior Tony hopes for? The monster Captain America fears? No one knows. They have to ask him what side he’s on—not something you ever want to ask of the superbeing you just molded from techno-clay. Vision puzzles over the question a bit and says he’s not sure he’s on anyone’s side: He’s on the side of life, whereas Ultron isn’t. He says, simply, “I am …” allowing the words to tail off.

In the context of the story, Vision is saying that he is conscious. He is alive. But it’s also an explicit allusion to God’s own statement of “I AM” in the burning bush. We’re given another godlike being with a penchant for biblical asides—only this one comes to save, not kill. He is, in a way, a New Testament savior pitted against a wrathful, Old Testament-like god—an intercessor to stave off Ultron’s ultra-doom.

Now, I really enjoyed Age of Ultron, but I found this pretty problematic, theologically speaking. It’s one thing to have Superman as a Christ-like stand-in. But Vision, because he’s manmade, carries some baggage with him. Instead of God breathing life into man, we have man bestowing life into a god.

I could end this little essay right here. But believe it or not, there’s more to talk about in this spiritually intriguing superhero movie. So let’s set aside my qualms for a minute and explore what else Vision has to say.

“There is grace in their failings,” Vision says of humankind. “I think you missed that.” He understands what evil never can quite grasp: Love is “the greatest of these,” and more powerful than anything.

Vision is both man and something else, just as Jesus is fully mortal and fully divine.  Ultron says that Vision could’ve been a “savior”—that is, he could’ve saved the world by helping Ultron kill everyone in it. “You settled for a slave,” Ultron says. We could read this as another biblical echo: “For even the Son of Man came not to be served but to serve, and to give his life as a ransom for many,” Jesus says in Mark 10:45. We don’t know the extent of Vision’s power, but we do understand that, instead of using it for his own ends (or Ultron’s), the android becomes, just as Jarvis always was, a servant—someone who understands our mortal failings and loves us anyway, and will sacrifice his all to save us.

The Infinity Stone in his forehead could be interpreted as a divine spark—the animating  breath and soul that comes not from Tony’s mechanizations, but from elsewhere. In fact, Tony doesn’t technically bring Vision to life at all. Rather, it comes from a bolt from above—administered via godlike blow via Thor’s legendary hammer. It’s interesting how many references we hear about Thor’s Mjolnir in this movie, and how it can only be wielded by those who are “worthy.” Thor may not be a god (earlier films make that clear), but there’s a suggestion that his hammer is indeed a divine instrument, capable of seeing into the hearts of people, to judge them and, by allowing them to hoist it, sanctify their work. It certainly was no accident that, besides Thor himself, only Vision was deemed worthy.

I can’t say how many of these spiritual allusions Whedon thought about. Was he thinking about the theological implications of Thor administering Vision’s life-giving blow?

Or did he just think the movie could use a little more hammer? Who knows? But if Whedon et al weren’t necessarily interested in formulating spiritual answers, they were pretty interested in exploring spiritual themes. Indeed, this might be the most faith-centric superhero movie I’ve ever seen.

At some point, Ultron visits a church. “The church is in the exact center of the city,” he says. “The elders determined everybody should be equally close to God.” Again, it’s telling that he makes that church the base for his doomsday device—and it’s in that same church where the Avengers battle Ultron’s minions in the movie’s Armageddon. The church, both physically and thematically, is the center of it all. 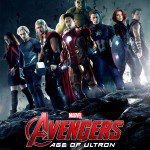 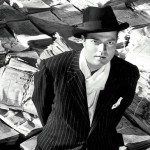 May 6, 2015 Orson Welles, Ultron and a Longing for Home
Recent Comments
0 | Leave a Comment
Browse Our Archives
Related posts from Watching God