Television sitcoms want you to like them. So historically, half-hour comedies have avoided the same topics we do during Thanksgiving dinner: politics and religion. After all, no one wants Uncle Harold to throw the yams again.

But as USA Today pointed out recently, the television times are a’ changing. More and more shows are talking about faith and religion. Not just high-prestige niche dramas like Hulu’s The Path or Netflix’s The Crown. No, even some sitcoms are plumbing spirituality for a laugh or two, and nowhere is that trend more obvious—and, in some ways, more welcome—than in CBS’s Living Biblically, which begins its run tonight.

Loosely based on the book The Year of Living Biblically by A. J. Jacobs, the show focuses on film critic (!) Chip Curry (Jay R. Ferguson) and his wife, Leslie (Lindsey Kraft). Before the show begins, Chip doesn’t have much interest in religion, though he was raised Catholic. “I consider Chip Catholic like I consider Olive Garden Italian,” Leslie says. But that changes when Chip deals with two massive life changes: First, his best friend of 30 years dies. Second, Leslie announces that she’s pregnant. Feeling a need to find new meaning to his life and, if possible, become a better person, Chip decides to start living exactly as the Bible suggests he should—not just the “do unto others” stuff, but to not mix the fabrics of his clothes.

Leslie, agnostic, is dubious of Chip’s newfound commitment to faith: “Couldn’t you go to church one time before making this huge commitment?” she asks. But as time goes on, she sees Chip undergo some remarkably positive changes.

Living Biblically is remarkably positive in its portrayal of faith, too—and frankly, not what I expected. And that, as I learned from the show’s creator, Patrick Walsh, was part of the point. Here’s my interview with Walsh, where he talks about how he wants the show to be a much-needed bridge between people who disagree about religion, and how Living Biblically has impacted his own sense of faith.

Paul Asay: When I first heard about this show, quite frankly, I was a little nervous about it. I’d not read the original book, and I had always assumed that it was a bit mocking of some of the Bible’s Levitical rules. Your show makes fun of some of that stuff, but it feels really respectful, too. Did I jump to the wrong conclusions about the book?

Patrick Walsh: I read the book and I found it to be relatively respectful. … I would say it helped me quite a bit tonally, because it is such a very difficult tone to get right, and be entertaining for people who are not faithful, and also be respectful and entertaining for people who those who are. I used it as an inspiration, really. I thought it did a good job with it.

Asay: The show was quite funny, by the way. I particularly enjoyed the relationship between Chip and Leslie—this man trying to live his life as biblically as possible, his non-believing wife, and how they navigate the tension that comes with that. As our society gets more pluralistic, I’m guessing that lots of couples and families are dealing with those sorts of dynamics, and the relationship between Chip and Leslie feels both real and deeply respectful. Was that something you were shooting for?

Walsh: Absolutely. I think it’s very frustrating, and I think a lot of people [share this frustration], is the level of discourse in terms of how politics, religion, all the major subjects, has really just devolved into people yelling at each other all day on the internet, and not simply willing to listen to another’s point of view. So for me, an aspect of this show was to present a lot of people with extremely different beliefs who are coming to a better understanding of each other. They might not always love what the other one is saying. They might not change their whole lifestyle because of it, but at least they’re listening with respect.

Chip and Leslie are a big part of that. They love each other. They’re doing their best to make this situation work. … I think it’s important with a topic like this to just present a welcoming portrayal of faith, a portrayal that doesn’t exclude anyone, and a portrayal that hopefully doesn’t upset anyone. It’s a very combustible subject, but I don’t know that it has to be. I think we benefit a lot more from hearing each other out, y’know? 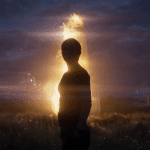 February 23, 2018
The Eden and Armageddon of Annihilation
Next Post 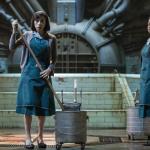 March 2, 2018 The Shape of Water is Just Pretty Good ... Except for One Beautiful Thing
Recent Comments
0 | Leave a Comment
"I know that the first film on this list not explicitly about Christian faith, Denis ..."
Robert Charles The 12 Best Non-Christian Christian Movies ..."
"The author, starts the article with a dismissive/arrogant affirmation unto all that are worthy to ..."
oscar deltoro ‘I’m Just Fascinated by It.’ Morgan ..."
"*tenets*"
eeenok Doc ‘We Believe in Dinosaurs’ Highlights ..."
"“It’s fired imaginations of anyone and everyone who hears it—including me, in fifth grade...”Yes, it ..."
GalapagosPete Doc ‘We Believe in Dinosaurs’ Highlights ..."
Browse Our Archives
get the latest from
Watching God
Sign up for our newsletter
POPULAR AT PATHEOS Entertainment
1

The CW's 'Walker' Is Sure Not...
Kate O'Hare's Pax Culturati
Books by This Author Books by Paul Asay