The Shape of Water is Just Pretty Good … Except for One Beautiful Thing March 2, 2018 Paul Asay

The Oscars are practically upon us, and The Shape of Water leads the pack with 13 Academy Awards nominations—including Best Actress (Sally Hawkins), Best Director (Guillermo del Toro) and Best Picture. It’s a visually stunning romantic fairy tale, one that left many a reviewer twitterpated in its scaly wake.

I liked The Shape of Water. It was … fine?

But I expected more. I generally love del Toro. Pan’s Labyrinth was brilliant. His Hellboy movies were surprisingly great. I would’ve loved to have seen what del Toro would’ve brought to The Hobbit movies (which he was scheduled to direct before he dropped out of the project in 2010). He creates horrific, beautiful monsters and gives them a sense of life and empathy unparalleled.

And that’s not all the movie has going for it. Sally Hawkins is great. Michael Shannon, who plays the villainous Richard Strickland, brings to the screen a rocklike charisma, even when he plays such a cad. Octavia Spencer, as the cleaning woman Zelda, is delightful. But for me, Shape of Water didn’t equal the sum of its parts.

Admittedly, part of it is me. You don’t have to fall in love with movies like Dunkirk to appreciate their cinematic virtuosity. You don’t have to adore Three Billboards Outside Ebbing, Missouri, to marvel at its stellar performances and needle-sharp writing. But as a romance, The Shape of Water requires a connection of the heart to make real contact with the audience. As a fable, it needs us, on some level, to buy into its myth.

And del Toro loves his myths—pagan-like fairy tales seemingly ripped from ancient Old World forests and plumbed from our collective subconscious. He seems to see much of the modern world as stripped of magic, of the wonder and terror that make life exhilarating and glorious.

Perhaps del Toro’s myth-making masterpiece—the film that most clearly defines what I see as the director’s motivating ethos—was Hellboy II: The Golden Army. In it, Hellboy and his team of misfits do battle with Prince Nuada, who leads legions of wondrous, terrible creatures in a misguided effort to overturn humanity’s reign over the earth. But even though Nuada may be the villain in The Golden Army, del Toro’s sympathies lie with him, not with the human civilization that the underappreciated Hellboy is trying to save.

“Humans have forgotten the gods, destroyed the earth, and for what? Parking lots? Shopping malls?” Nuada says. “Greed had burned a hole in their hearts that will never be filled! They will never have enough!”

The Shape of Water feels like, in a way, a revisitation of some of these themes in a more critic-friendly form. But it left me less satisfied.

In the film, a strange, unpredictable fish-like creature—worshipped as a god in the Amazon—is captured by the United States in the early 1960s and taken to a gloomy, rusting lab, where scientists and the military (led by the wickedly ambitious Strickland) can experiment on it. Only one person, the mute cleaning woman Elisa (Hawkins), sees the heart—the humanity, if you will—within the creature. She befriends it, falls in love with it and ultimately tries to save it, trying to enlist her roommate, Giles to the rescue party.

“It’s not even human!” Giles blusters.

“If we do nothing, neither are we,” Elisa signs.

I really liked a lot of the show’s artistic and thematic flourishes: The sometimes sickly shades of red and green that permeate its palate. The tension between the magic of nature and the ambition of man. We see those themes play out explicitly in the creature’s ability to harm or heal. Those who respect him—and, by extension, the mystical wonder of nature—are miraculously cured of everything, from bloody wounds to hair loss. Those who don’t … well, too bad for them. The creature bites off a couple of Strickland’s fingers at one point. And even though doctors were able to stitch the fingers back, they rot, turning black and worthless.

Modern medicine has nothing on the mystical powers the merman brings to the table.

On that level, The Shape of Water is an artistic, beautiful front in a culture war—not the war that sometimes still makes the headlines, but a war between del Toro’s magical, almost Pagan sensibilities and anything that smacks of American modernity. Set in the 1960s, when American suburbia was at its height and American confidence was at its nexus, the film takes aim at everything that culture stood for: Its optimism, its arrogance, its love of big cars and belief that technology could make everything better.

The Shape of Water is what it would look like if Disney’s Fantasyland and Tomorrowland suddenly went to war with each other. And in del Toro’s telling, Space Mountain doesn’t stand a chance.

I’m at least halfway sympathetic to del Toro’s critique. I’m no fan of modernity myself, and I want a little mystery and magic to permeate life. But frankly, bashing 1950s and ’60s Americanism has almost reached the point of cliché now. This is well-tilled ground, and we’ve been critiquing this juncture of American history since, well, the late 1960s. And honestly, I simply don’t buy the notion that the Leave It to Beaver era was simply a well-manicured wasteland.

It seems that del Toro stuffed all of what he sees as Eisenhower-era America’s worst traits in the character of Strickland—its arrogance, its ambition, its trust in technology, its tidy family that hides deep dysfunction. So naturally, del Toro casts him as an arrogant, hypocritical Christian, too.

“You may think it looks human,” he tells Zelda, referring to the creature. “Stands on two legs, right? But we’re created in the Lord’s image. You don’t think that’s what the Lord looks like, do you?”

“I wouldn’t know, sir, what the Lord looks like,” Zelda says.

In the movie, Christianity is seen as a tool, or a symptom, of American cultural hegemony—a cudgel to crush ideas or themes or people or things that run counter to it. And unquestionably, Christianity has been used that way.

But to me, the core of Christianity seems more in alignment with del Toro’s view of the world than del Toro might expect. After all, the crux of the faith hinges on mystery. It embraces wonder and beauty and terrible power.

I’m struck how much his view of 1960s America mirrors my own view of ancient Rome from two millennia ago.

The Roman Empire was arguably at its nexus then, controlling most of the known world. It, too, was obsessed with rules and modernity, what with its roads and aqueducts and well-ordered social structure. As a whole, Rome thought it had it all figured out. And then comes along this guy from an empirical backwater who offered a radically new way to look at the world. He washed feet. He healed the sick. He turned over tables in His very own temple. And in so doing, He overturned the world.

I’m sure del Toro didn’t anticipate the connection. But the film ends with a line that seems overtly, and beautifully, spiritual. A line perhaps meant to reflect the love between the merman and Elisa calls to my mind, instead, the beautiful power and presence of God. It goes as follows:

“Unable to perceive the shape of You, I find You all around me. Your presence fills my eyes with Your love, it humbles my heart for You are everywhere.”

[Paul Asay will be live-tweeting the Oscars Sunday night. You can follow him at @AsayPaul.] 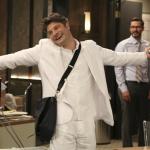 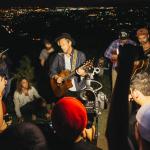 March 6, 2018 Doc Takes Fans Through a (Remarkable) Day in the Life of Switchfoot's Jon Foreman
Recent Comments
0 | Leave a Comment
Browse Our Archives
get the latest from
Watching God
Sign up for our newsletter
POPULAR AT PATHEOS Entertainment
1