Awake, Netflix’s latest sci-fi thriller featuring a very stressed-out mother (see Bird Box), is a silly, bloody but reasonably interesting flick. No, most critics haven’t loved it: It’s holding a 33% “freshness” rating on Rotten Tomatoes right now. But they’ve overlooked, I think, the movie’s most intriguing theme: Its religion. But to dive into those spiritual elements, we’ll need to get into a few spoilers.

Thanks to a really nasty solar flare, the world has gone a little crazy in Awake. At first, it seems the problems are mostly electronic: Jill (Rodriguez’s flawed mother, a former drug addict who lost custody of her kids because of it) notices this right away as she’s taking her kids (Noah and Matilda) from their grandmother’s house. The vehicle she’s driving loses its brakes and eventually winds up in a lake. Jill and the kids make it out safely, but just barely. In fact, 10-year-old Matilda (played by Ariana Greenblatt) nearly drowns, and she would’ve been gone for good had it not been for some timely CPR.

But malfunctioning electronics proves to be a secondary concern.  It seems that while the flare permanently clicked the tech switch to “off,” it pushed humanity’s switch to “on” and made it stick. No one can sleep anymore. And that’s pretty serious: The movie tells us that without sleep, our brains will eventually bend until they break. Lose too much sleep, and the brain swells so much that the insomniac dies.

We know of only two exceptions to this “no sleep” state of being: One very sick woman and … Matilda.

The movie could’ve gone in a hundred of different directions at this point. But it goes to church.

Matilda’s grandmother and guardian, Doris (Francis Fisher) literally takes it, and us, there. She brings Matilda, too, where the girl talks with the church’s pastor (Barry Pepper). The pastor is doing his best to make sense of this inexplicable curse of wakefulness, and he’s trying to figure out the mystery of Matilda, who seems to be both just a normal little girl and, somehow, a key to the how and why of this great and terrible happening … and maybe the catalyst to move beyond it.

“Not everyone asked to be called to God, you know,” he tells her. “Some people just are.”

He talks about his own experience as a drug addict, and how he eventually covered up his track marks with a tattoo of a cross. He overdosed, he tells her, and should’ve been gone for good. Instead, he laid for “three days in rest” before he died. He was found just a minute after he expired, though, and revived.

“Like Jesus, I returned from the dead,” he said.

He says he’s not comparing himself to Jesus, but did decide to serve him from that day forward. He called his resurrection a miracle, and he tells Matilda that people could sure use another one.

“Are you saying that I need to die?” Matilda asks.

The pastor says no, and he means it. But the conversation, and that statement particularly, forms the foundations of not just the harrowing scene that follows (where plenty of people in the congregation believe that Matilda should die—as a Christ-like sacrifice), but for the later stages of the film.

Matilda winds up escaping the church with her mother and brother, but the movie suggests that the pastor and Doris do not. They apparently die to protect her. (We don’t see them die, but we do hear some telling gunshots.) The three family members experience a dizzying number of challenges and near-catastrophes as they head to what’s called a “Hub,” where scientists have gathered to try to cure this sudden disease of wakefulness.

But is the Hub safe? Will the doctors there protect her little girl, or will they just use her like a lab rat? Jill’s not at all sure. But it doesn’t matter: Just when Jill decides that the Hub might be the worst babysitter in the world, Matilda gives herself up. She kneels in the rain in front of a bunch of trigger-happy, sleep-deprived soldiers, repeating over and over again, “I can sleep. I can sleep.”

Was Matilda thinking about her conversation with the pastor? Remembering all that talk of sacrifice? We can’t know. But there’s no question that Matilda is knowingly committing a sacrificial act. She’s turning herself over to the authorities, even as Jill’s willing to cut off an ear or two to protect her.

But even with Matilda in custody, science doesn’t seem to have any answers. The best the Hub can do is inject its workers with a drug cocktail that helps them operate without sleep but damages their brains in the process. And in the end one doctor—a mother herself—decides, like the mad congregants in the church, that Matilda must die.

Events move pretty rapidly at this point. Matilda doesn’t die, but a whole lot of other people do. One of those fatalities is Matilda’s brother, Noah, who accidentally electrocutes himself. But Matilda—showing a lot of moxie for her age—finds the facility’s defibrillator, and she and Jill use it on Noah. It appears as though it didn’t work initially, but then Matilda realizes something as she watches a tear collect in Noah’s eye: He’s sleeping.

And then she realizes: The flare requires a hard reset. You have to die to sleep. She herself died for a moment when she was pulled from the watery crash near the beginning of the movie. Noah, too, was dead before he could live again.

Are you saying I need to die? Matilda asked of the pastor. The answer was not from the pastor, but elsewhere. Yes, it said. You must die to live.

We can think back and remember how Matilda died … in a lake. The scene suddenly fills with symbolism: Water has long served as a metaphorical conduit between death and new life in Christianity. We are baptized in that water. As we are submerged, we die to ourselves. And when we rise from that water, we rise again—new creations, clean and pure. Just as death was a reset for Matilda, so baptism is a reset for us. A chance to start over.

Water again and again serves as a symbolic touchstone toward ultimate salvation: The rain pouring down when Matilda gives herself up; the tear in Noah’s eye.

Noah’s own name recalls a different watery scene from the Bible—the ark that held a remnant of life, carrying it safely from an old, broken world into a new and promising future. He, Jill and Matilda are, by this time, a remnant of an old world themselves, but the movie suggests that they’re heading into a rainbow of a brighter day.

Matilda and Noah, with that knowledge in hand—a knowledge granted not through science, but faith—know what they have to do. They gather in Jill and carry her to the water, submerging her in the death-giving, life-giving liquid. That old life of hers—of drugs and irresponsibility and regret—is behind her, washed and wiped away. She dies in that water. Her children pull her out. And then, moments later, we hear her draw breath—the breath of a new life.

She is, truly, born again.

Awake isn’t a great movie. It doesn’t hang together completely. But when we look at its spiritual references and echoes, Awake goes deeper than you think. 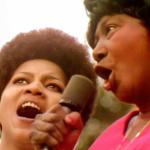 July 7, 2021 Summer of Soul Is a Great Doc (and Deeply Spiritual, Too)
Recent Comments
0 | Leave a Comment
"Thanks, BrowserPhil ... so embarrassing. Aravis was from The Horse and His Boy, right?"
Paul Asay Narnia Comes to ‘The Falcon and ..."
"Please replace Aravis with Jadis. :-)"
BrowserPhil Narnia Comes to ‘The Falcon and ..."
"I know that the first film on this list not explicitly about Christian faith, Denis ..."
Robert Charles The 12 Best Non-Christian Christian Movies ..."
"The author, starts the article with a dismissive/arrogant affirmation unto all that are worthy to ..."
oscar deltoro ‘I’m Just Fascinated by It.’ Morgan ..."
Browse Our Archives
get the latest from
Watching God
Sign up for our newsletter
POPULAR AT PATHEOS Entertainment
1