The Jesus Music Hits All the Right Notes

We knew this, of course. The Bible tells us so. history does, too. Success can shape us in ways we never wanted, and its pressures can push us out of kilter with ourselves. We see that even in Christianity—maybe especially in Christianity. God’s blessings can pull us away from God Himself.

The Jesus Music, an excellent documentary directed by Andrew and Jon Erwin (and in theaters beginning today, Oct. 1), points to that paradox again and again.

“When the world of success came to me, it just became too much for me,” says gospel artist Kirk Franklin.

“I don’t think you’re ever ready for a lot of success quickly,” says CCM superstar TobyMac.

“If I were to take everybody out of the magazine who had some sin problem in their life,” CCM Magazine founder John Styll recalls telling a musician, “we’d publish blank paper.”

The Jesus Music traces the history of contemporary Christian music from its post-flower-power-era beginnings to its first crossover successes to the massive industry it is today. The Erwin brothers give us a really delightful, often inspirational look at the music and its artists—but it doesn’t shy away from the paradoxes inherent in its creases. And that’s when the doc is at its most compelling.

Christian Contemporary music didn’t start out as an industry, The Jesus Music tells us. It started as a movement—a rejection of the failed promises of Woodstock and an effort to embrace something truly eternal.

A lot of those hippies played music, too. And so they turned their lyrics upward. Soon, that music started spreading from its California homebase. Singer/songwriter Amy Grant discovered it all the way in Tennessee, where Christian songs traveled by word of mouth. “[It was] all so underground,” she says in the doc. From hippie to hipster.

Soon artists like Keith Green and Larry Norman were garnering some mainstream attention. In the 1980s, the Christian hair metal band Stryper pushed their way onto MTV. Grant became CCM’s first real breakout star in the 1980s, and the popularity just kept growing. In the 1990s, DC Talk represented perhaps CCM’s apex, named in 2002 as “the most popular overtly Christian act of all time” by the Encyclopedia of Contemporary Christian Music.

But while DC Talk’s members—TobyMac, Michael Tait and Kevin Max—sang about God, they were fighting amongst themselves. “They were held together with duct tape and prayer,” Audio Adrenaline’s Mark Stuart says in the doc.

Meanwhile, some Christians wanted to use duct tape, too—not to patch CCM up, but to plaster it over the artists’ mouths.

In the early days, many Christians had no idea what to make of rock music with Christian lyrics. Televangelist Jimmy Swaggart might’ve been CCM’s biggest critic in the 1980s, calling it a “diabolical scheme of Satan.” Forb Stryper’s Michael Sweet, Swaggart’s diatribes were particularly painful, given that Swaggart was instrumental in leading he and his family to Christianity.

Evangelist Billy Graham was instrumental in encouraging Christians to accept this new expression of faith. Artists like Grant, whose music she herself describes as a “comfortable pair of house shoes,” helped ease the way, too. But even when CCM grew more accepted, Christians had to deal with another painful reality: The artists who made it were just as imperfect as those who listened to it.

“I think Christian artists … face the same challenges [as country and pop stars], but their audience is different,” counselor Al Andrews says. “This is going to sound really strange, but the country audience, the pop audience, is more forgiving.”

The doc explores the racial divide in CCM, too, and some say that the music has only become more segregated as it has evolved. “There’s still not a tangible plan to address this separation between these two worlds,” Franklin says.

The Erwins navigate these issues thoughtfully and (given that Andrews is right) fearlessly. But they do so without ever losing sight of the music itself—and its purpose.

CCM may be a real industry these days, filled with all the pressures and temptations that the word implies. It may be filled with artists who sometimes make bad or questionable decisions. It is an imperfect vessel, to be sure. Just like the Church is. Just like we are. And yet, it’s still all about making a joyful noise to the Lord, and the Erwins never forget that. Indeed, they embrace it.

The Jesus Music is playing in theaters right now. 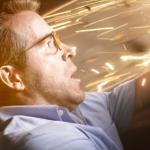 August 13, 2021
Four Things that Free Guy Says About Free Will (and Other Stuff, Too)
Next Post

October 8, 2021 In No Time to Die, James Bond Finds Time to Care
Recent Comments
0 | Leave a Comment
"Thanks, BrowserPhil ... so embarrassing. Aravis was from The Horse and His Boy, right?"
Paul Asay Narnia Comes to ‘The Falcon and ..."
"Please replace Aravis with Jadis. :-)"
BrowserPhil Narnia Comes to ‘The Falcon and ..."
"I know that the first film on this list not explicitly about Christian faith, Denis ..."
Robert Charles The 12 Best Non-Christian Christian Movies ..."
"The author, starts the article with a dismissive/arrogant affirmation unto all that are worthy to ..."
oscar deltoro ‘I’m Just Fascinated by It.’ Morgan ..."
Browse Our Archives
get the latest updates from
Watching God
and the Patheos
Entertainment
Channel
POPULAR AT PATHEOS Entertainment
1

Halloween's Michael Myers Is Not Just...
Watching God
Books by This Author Books by Paul Asay