A God After My Own Heart: How We Make God in Our Own Image 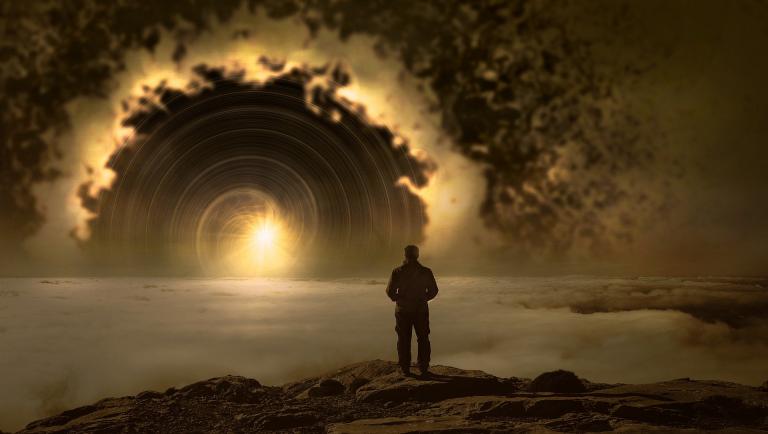 Over the next little while, I want to talk about the spiritual life and in particular the ways in which our approach to God is shaped by psychological processes – by the process of creating gods in our own image and then wrestling with those gods, learning their weaknesses and inadequacies and, in the process, coming to greater knowledge of ourselves.

I think our quest for God is, at bottom, motivated by a strong feeling or intuition that there is something beyond ourselves – an unfathomable grandeur somewhere “out there,” or an unplumbable depth that is within.

In our relationship with God we are, therefore, continuously entering terra incognita. The spiritual life is, in its simplest form, a kind of exploration, a setting out into this great mystery that lies both without and within the human person.

And like any voyage, it is potentially dangerous. We sense that it is possible to become shipwrecked, lost, adrift, to starve, to freeze, to drown. As Hopkins observed, “mind has mountains; cliffs of fall/Frightful, sheer, no-man-fathomed.”

The interior life always begins by setting out into the unknown parts of the self. With any spiritual system, we are ultimately seeking self-transcendence. Whether we call this “humility” or “self-overcoming,” “transcendence of ego” the “lover becoming the beloved one,” or “dissolution into the absolute.”

The various mystical terms all point towards a state in which the person is no longer dominated by their ego, in which we achieve a perfect union between the God who is unfathomably other and the God who is my profoundest self.

To get there, however, we have to journey through the self. We have to venture into the undiscovered country that lies within and we have to confront the various delusions, temptations and obstacles that litter our interior spaces.

Perhaps the most formidable danger in the spiritual life is God – or rather the idea of God. The first commandment of the Judeo-Christian Bible condemns the worship of false gods and the creation of graven images.

Now, this text would certainly have had political implications at the time. Gods in the ancient world were heavily politicized entities whose primary purposes were very concrete and practical: securing victory in battle, ensuring an abundant harvest, and so forth. The prohibition on worshiping other gods is obviously, in this context, part of a larger set of cultural prohibitions that were put in place in order to secure the survival of the Jewish people as a distinct cultural group in the midst of the various much more powerful political groups that dominated the ancient near east.

But lets put that aside for the moment, and look at how the prohibition of idolatry came to be understood as those texts increasingly became removed from their original, political context and became the foundation for more individual mystical practice.

Slowly, the idea of the idol ceases to be concerned with a literal, concrete piece of carved marble or cast gold that is the god of a neighbouring tribe or city. Instead, the idols become the things that we worship, the things that we serve, that are not god. The traditional list includes things like money, sex, and power.

At base, however, all forms of idolatry are really a matter of mistaking one’s own psychological projections for God. For example, it’s not really that anyone worships money, but rather that they worship their own ability to use money to manifest their own ego projects in the world. Nobody really worships sexual pleasure, they worship a powerful aspect of the psyche that Jung calls the Anima (for men) or the Animus (for women.)

The thing that formal religion often misses is that all God constructs, all ideas about what and who God is, are really projections. God qua God is not apprehensible. Anything that we can sink our emotional, intellectual or imaginative teeth into is, of necessity, much, much smaller and less impressive than the fathomless ground of all reality.

Basically, a God that can fit inside your head isn’t God. Because your head is a very, very small part of the totality of the universe and the totality of the universe is the minimum possible extension for whatever God is. (Some systems posit that God is coterminous with the universe, others that God transcends and exceeds the universe. Since the universe is so incredibly vast, and we know so little about it, our approaches to this question have substantially less likelihood of bearing any relationship to truth as the speculations of a group of six year olds on the nature of life on other planets.)

Anyway, the point is that all of our ideas about God are themselves projections of aspects of our own psyches, and as such they are continually at risk of becoming idols – or monsters.

(Note that this isn’t actually a problem or a bad thing. The way that we grow in the spiritual life, that we learn about ourselves and others, and that we move outwards from total self-absorption towards communion is by moving through our projections. It’s like with anything: our ideas always fall short of truth but they become more and more refined over time, and slowly, incrementally, they become slightly more like truth.)

A lot of ink gets spilled in Christian discourse on the various types of idols that menace Christian worship from without: “the world, the flesh and the devil.” These are idols that arise outside of Christianity and threaten the Christian worldview.

What I’d like to focus on over the next little while are the idols and monsters that arise within Christian theology: the ways in which our psychological projections become the bases for theological ideas and fixations which we then mistake for “truth” or “God.”

I’m going to start with a cluster of theological obsessions that arise over and over in Christian thinking and which derive from the basic idea that the world in general, and humanity in particular is fundamentally broken and displeasing to God.

Image by Stefan Keller from Pixabay

May 17, 2020 Problem of Evil, or Problem of Ego?
Recent Comments
0 | Leave a Comment
"I am intrigued by the stories we tell ourselves and each other throughout history, especially ..."
Bob_OR A God After My Own Heart: ..."
"I'm also a longtime lurker, and I have to say that I very much appreciate ..."
Woodcarver Philosophy of the Body
"Thank you for your reply.I’ve been a silent lurker in this corner of Patheos and ..."
Double bind Philosophy of the Body
"I'm going to be honest, I would gloss over a lot of "Feminism and Philosophy" ..."
DC Kurtz Philosophy of the Body
Browse Our Archives
Related posts from Wayward Woman