A few years ago, I wrote this account of some experiences I had with Darius Gray.  I must share it again. 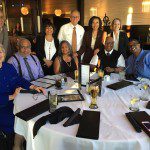 Prejudice, which President Kimball called “thou ugly,” mattered deeply to President Gordon B. Hinckley. He was troubled to hear about anyone being mistreated—and particularly when the excuse for mistreatment was race-based.

Darius Gray was similarly concerned as he received countless calls from men and women all over the United States who were still dealing with the ripples of racist folklore—people whose children were told that they were cursed, or that all blacks had been “neutral” in the pre-existence; white members who pulled their children from Sunday school because they didn’t want them in the same class as a black child; investigators or new converts who were addressed with racial epithets. Darius, in his calling as the president of the Genesis Group (a support group for black Latter-day Saints), told President Hinckley about some of these incidents. He heard later from President Hinckley’s daughter that she had found him pacing in his living room. When she asked what was wrong, he said, “Darius has told me some things, and I am troubled.”

I was moved by this report of President Hinckley’s reaction. How must a prophet feel upon realizing that some he leads are “without affection” for their brothers and sisters? I don’t know what other things happened to lead him to give his remarkable address in the priesthood session of April Conference 2006, but Darius was watching and sobbed throughout the talk. As soon as the session ended, I got a call from a friend telling me that President Hinckley had given a profound talk on racism. Another friend said he was aroused from near slumber as President Hinckley spoke, feeling the spirit of prophecy in a way he had rarely felt it. Armand Mauss called and said, “For the first time in years, I missed the priesthood session. And now I hear that something important happened.” (Since my husband had taken copious notes, I was able to read Armand a close approximation of what President Hinckley had said.) But in taking all of these calls, I missed the one from Darius. I had only his voicemail. He was in tears and could barely speak. He said merely, “He did it. President Hinckley did it. He spoke directly to the issue.”

It was indeed one of the most important talks on prejudice we’ve ever had in the LDS Church and included this provocative, rhetorical question: “How can any man holding the Melchizedek priesthood arrogantly assume that he is eligible for that priesthood whereas another, who lives a righteous life but whose skin is of a different color, is ineligible?” Those words, without any reference to “after 1978” are considered by some to be the final prophetic utterance on the priesthood restriction and everything that came with it.

Of course, not everyone remembers the talk as well as Darius and others do. Yesterday I heard of an incident in Utah where a missionary, part of a senior couple working in a church facility, looked around to be sure no one was listening, and then addressed someone he certainly thought would agree with him politically, and said something negative about President Obama, calling him “that nigger.” Apparently, someone needs to put a little note on some missionary refrigerators: I remind you that no man who makes disparaging remarks concerning those of another race can consider himself a true disciple of Christ. Sincerely, Gordon B. Hinckley.

I believe that President Hinckley was moved to speak so boldly not just by what Darius and others had reported, but also (and more importantly) by the Spirit. He, with authority to receive revelation for the entire body of the church, spoke in his prophetic role.

And what about others’ personal revelations?

In 1998, before the exchanges with President Hinckley occurred, Darius received what felt like a flood of knowledge and revelation on the subject of race and the priesthood restriction. He wrote up as much as he could, but did not share it for two years. He waited, praying about how he should proceed. In 2000, he found The Doctrine and Covenants Student Manual (copyright 1981), which talked about personal revelation and indicated that “every person properly appointed and sustained to act in an official capacity in the Church is entitled to the spirit of revelation to guide a particular organization or group over which he presides” (McConkie 187).

Since Darius was then the president of the Genesis Group, a Church unit to support those of African lineage, he felt that he was acting within those parameters. But he was still careful. Finally, he read instructions in a CES manual suggesting that if anyone believes he/she has received an important revelation which should be shared with the entire Church, they should submit it to those in authority. This kind of correlation is intended to keep self-proclaimed prophets from starting new churches, preaching ideas contrary to true doctrine on the authority of “revelation”, or justifying things not accepted in the orthodox LDS Church (polygamy being the most obvious example).

Darius submitted “Not a Curse but a Calling” to President Hinckley for approval, and asked if he could teach it.

This did not make Darius’s inspiration “new scripture” in any way—and he used a disclaimer whenever he taught the document we referred to as NACBAC: “What I am about to share should not be considered scripture, inasmuch as it is not found in any of the standard works of the Church. It is, however, consistent with the scriptures, and permission has been granted by the Brethren for me to teach it.” Nor did he share it capriciously. He held it in reserve and taught it only when he felt that the Spirit was right. 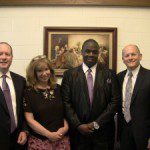 In 2013, the Race essay was published, after being approved by all of the Church leadership.  I have just linked it.  If you have not read the essay, please click on “RACE ESSAY” in the previous sentence.  Read it now.

It was the signal to go forward in a way which required real strides–leaps into new paradigms, long jumps into the future of global unity, vaulting into the realms of glory where our hearts truly understand that God is no respecter of persons.

President Kimball, during October Conference 1978–the conference in which Official Declaration #2 was offered for a sustaining vote–spoke of going beyond the letter of the law and fully into the Spirit.  As you read his examples, think of how you personally might become a “true disciple of Christ” insofar as race issues are concerned.

It is not enough to acknowledge the Lord as supreme and refrain from worshiping idols; we should love the Lord with all our heart, might, mind, and strength, realizing the great joy he has in the righteousness of his children.

It is not enough to refrain from profanity or blasphemy. We need to make important in our lives the name of the Lord. While we do not use the Lord’s name lightly, we should not leave our friends or our neighbors or our children in any doubt as to where we stand. Let there be no doubt about our being followers of Jesus Christ.

It is not enough to refrain from moviegoing, hunting, fishing, sports, and unnecessary labor on the Sabbath. Constructive use of the Sabbath day includes studying the scriptures, attending church meetings to learn and to worship, writing letters to absent loved ones, comforting the sorrowing, visiting the sick, and, in general, doing what the Lord would have us do on this, his holy day.

If we truly honor our parents as we are commanded to do, we will seek to emulate their best characteristics and to fulfill their highest aspirations for us. Nothing we could give them materially would be more prized than our righteous living.

It is not enough to refrain from killing. We are rather under solemn obligation to respect life and to foster it. Far from taking a life, we must be generous in helping others to enjoy the necessities of life. And when this has been accomplished, we seek to improve the mind and the spirit.

We refrain from taking harmful substances into our body. Through wisdom and moderation in all things, we seek good health and a sense of physical well-being.

It is not enough to refrain from adultery. We need to make the marriage relationship sacred, to sacrifice and work to maintain the warmth and respect which we enjoyed during courtship. God intended marriage to be eternal, sealed by the power of the priesthood, to last beyond the grave. Daily acts of courtesy and kindness, conscientiously and lovingly carried out, are part of what the Lord expects.

It is for us to keep our hearts and minds pure, as well as our actions.

“Thou shalt not steal,” the Lord said on Sinai (Ex. 20:15). Thus it is for us to be honest in every way. We must be generous, the very opposite of selfishness. When money is needed, we give money. But often what is needed more is love and time and caring, which money cannot buy. When that is true, even being generous with our money is not enough.

Bearing false witness and coveting the belongings of others are further evidences of selfishness. “Love thy neighbour as thyself,” Jesus taught. On this and on the love of God “hang all the law and the prophets” (Matt. 22:39–40).

All of us bring our voices and insights to the church. We do our best to blend and hit the right notes. Sometimes we do it badly and make an entire congregation cringe. Other times, our harmonies seem miraculous, and we wonder if the Heavens themselves might open and send angels to sanctify our efforts and lift our highest notes to just the right pitch. And I think we’re all ready for a bit more soul and at least one good shout of “Hallelujah!”

July 27, 2016 Companions (The Film Previously Known As. . .)
Recent Comments
0 | Leave a Comment
"That was a delight to read. I hope you keep sharing your experiences."
Christina Report on our Trip to the ..."
"Christopher Hanna--we'd love to have you help our efforts in the DR-C. The missionaries we ..."
Margaret Blair Young The Real Elder Price – entire ..."
"I served in the Congo Brazzaville Mission 2018-2020. I can't say I saw the crazy ..."
Christopher Hanna The Real Elder Price – entire ..."
"Mormonism is a scourge upon humanity"
Morminion Dear Anonymous Mormon: There is no ..."
Browse Our Archives
get the latest updates from
The Welcome Table
and the Patheos
Latter-day Saint
Channel
Related posts from The Welcome Table 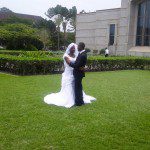 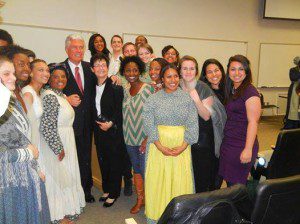 Latter-day Saint
What does the [Silver] Fox Say?
The Welcome Table

Latter-day Saint
If you're in Utah, you're invited! February 12!
The Welcome Table 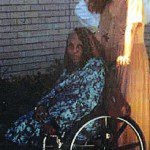