Weeping with Darius as we wrote the auction scene

Weeping with Darius as we wrote the auction scene July 15, 2020 Margaret Blair Young

Darius Gray’s grandfather, Louis Gray, was born a slave in Marshall, Missouri in 1858. We put the Louis’s family–his grandparents, Gracie and Louis–into our second book of the Standing on the Promises Series. We researched the history and even visited the segregated cemetery in Marshall. Finally, we wrote the scene where Darius’s great grandmother was auctioned to the Gaines family. We wept as we wrote the last sentence.

Read it as though you were sitting next to a descendant of one of the slaves on the auction block. I was when I wrote it. 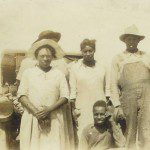 At first, there was little crying. But when a boychild—no older than five—got sold out of his mama’s handclasp, there was crying indeed. The boy wailed and the woman went to her knees, begging the heavy-bearded buyer, “Mister, he the bes’ boy when I can help him. He can be whatever you want. Let me train him. In the name of Jesus, buy me too.”

Seemed her words fell straight to the floor. Nobody paid her mind. The buyer picked the child up and swung him over his shoulders like a bag of grain. The mother’s words grew louder and more desperate. Louis heard a slap but didn’t look towards it. The mother was sobbing—full-voiced at first, with cries so sharp they could’ve clawed the air. Then it became a sob song and finally a long, ­muffled moan. Louis’s eyes insisted on finding her.

Whoever had sent this woman to auction had gone to some trouble making her look good. Her hair was braided down both sides and tied in colorful ribbons. Her blue dress and muslin apron were not new, but they were clean. He wondered why anyone would sell her off. Well, sometimes folks just needed money. He understood that and knew that if his own massa should find himself in straits, the slaves would likely get sold before the furniture would. (Of course, the massa would never sell off all his slaves. That household couldn’t run itself, and nobody but the colored help knew how to keep it running. If some slaves got sold, the remaining ones would simply get more work.) He thanked God his massa was living well off, with hogs to process and meat to sell. Louis Gray had known his mama, Maria Gaines, all his born days, and he had never seen an auction until now.

“That’s a healthy woman,” said Massa Mortimer. “We might be able to get her for a better price right this moment. She’s not showing herself to advantage, acting up that way.”

Louis could not speak the words that were filling him, so he stayed silent.

Massa stroked his cravat. “I personally couldn’t do that to a mother, but not everyone is like me.”

“Ripe hips on her, though she’s trim built. From the size of the boy, seems her milk is good. I heard once of a man stuffed rags down a slave woman’s dress so the buyer wouldn’t realize she had no chest, only consumption. Slave died two weeks after the sale.”

“You have to beware. Even a white man will cheat you blind if he thinks he can do it. At an auction, you check the item’s joints. Stiff joints can’t pick. You check a female’s dugs, so you don’t find yourself paying for something death has already bought. And you check the back for whip marks. No use trading good money for a slave who can’t keep his feet where they belong. Isn’t that the truth?”

“Yessir.” But Louis had not heard. There were too many sounds—the auctioneer, bidders, buyers asking questions, slaves answering in all the varied voices of defeat.

“Well, that woman’s not wearing rags down her dress, is she? What do you think?”

Louis obeyed. “She sad but not sick.”

“How about her arms?”

“Tolerable strong, from what I can see. Legs?”

“She’ll need to walk for us. I won’t have a cripple. What else do we need to look at, Louis?”

It was then, in a cold sweep of realization, that Louis understood why the massa had brought him on this trip and to this auction.

“Massa, this my first time. You knows your way around.”

“I want to view the teeth. No need to buy a mouthful of ­trouble. You pay enough for a slave, and you’d better get your money’s worth. I paid considerable for your mama. Found her at a fine auction over in Kentucky. And she’s been worth my investment. I won’t settle for less than the best. I’ll need to check the teeth on that woman before I turn over a penny.”

Louis watched his massa examine the woman’s teeth. Her face was vacant as she opened her mouth. All the while Louis could hear the auctioneer telling a teenaged girl on the block, “Turn. Bend over. Smile.” The girl did everything she was told to do with no words or questions. A big, burly man bought her. Next, an old couple was led to the table, and the bidding began all over again, though with less interest than the girl’s sale brought.

Massa decided the woman’s teeth were in good condition. When she went to the block, the auctioneer introduced her as a well cared for household servant who had done both cooking and field work, though she would be best placed in the kitchen or the home.

“Have her hold out her hands,” Mortimer Gaines called.

She heard and obliged.

“Have her bend her fingers.”

“Have her walk a few steps and then turn.”

She stiffened her back and took a step. Despite this indignity, there was a presence, a substance to this woman.

“Hold your head up, girl,” the auctioneer said.

When she did, her eyes closed. Seemed her whole face closed, shut down. Seemed the spirit in her retreated to some unknowable distance.

The bidding commenced, and he purchased her. He also bought a male field hand, whose growth was just coming on him and looked to be promising. This young man was handcuffed and shackled as soon as his price was paid.

On the way to the wagon, Massa Gaines instructed Louis to stay with the two new slaves. He was in the mood to drive, he said, and he wanted Louis to put them at ease, let them know they were lucky to be going to the Gaines residence. They had been bought by civilized, God-fearing people. It would be well for them to recognize that another, evil sort could’ve had them.

The field hand was kept in his chains. Up close, Louis could see that this was a child. His body may have started its bloom, but he wasn’t no more than twelve years old. He seemed resigned but curious too, watching the scenes change around him: hills, woods, great pine forests, small farms, an occasional lake. When Louis smiled at him, he smiled back.

“We get the shackles off you soon as we arrives. Massa don’t keep us chained. He got a couple of sons just older than you—Wilbur and Ben. You got a name?” Louis asked.

The woman was huddled in the wagon corner, staring straight ahead with a face so empty and eyes so glazed she appeared dead. She did not answer when Louis asked her name. He didn’t try talking to her again until they stopped at a little town to feed the horses and themselves. Massa spoke to a farmer while Louis took care of the animals and unpacked the ashcakes his mama had sent.

When he offered the woman some food, she shook her head. He dropped the ashcake into her lap anyway and suggested she might be hungry later. “I ain’t never seed a auction,” he whispered to her. “It’s a ugly thing. I seen them take yo’ boy.”

She met his gaze briefly. There was no life in her, except the quick movement of her eyes away from his.

It wasn’t until a week later, after they were back in Marshall at the Gaines slave quarters, that the woman told her name—not to Louis but to his mama, Maria.

“My name Gracie,” she said.

July 16, 2020 Gobo Fango and my Family
Recent Comments
0 | Leave a Comment
Browse Our Archives
get the latest from
The Welcome Table
Sign up for our newsletter
Related posts from The Welcome Table