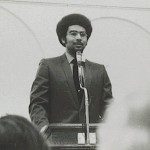 In 1968, conspiracy theories flourished that blacks from California were coming en masse to Utah, where they would start riots which would result in blood “flowing down the street.” I heard these scary reports from a Home Teacher, who read an alleged prophecy from John Taylor, which was subsequently revealed as a fake. But we all-white Provonians were a ready audience and utterly scarable. I definitely was scared.

It was quite a different experience for Darius, of course. He found himself followed wherever he went–particularly when he crossed Temple Square to reach his work at KSL Television. He finally decided he needed to buy a gun to protect his wife. He himself planned to get out of Utah on horseback if the situation became dire. When he purchased a holster for his pistol from Guns Unlimited, a couple of white men started a loud conversation. He knew they meant him to hear it. One said (verified today by Darius’s memory), “I was given a special temple recommend to be in the east towers of the Salt Lake Temple with [a particular rifle and scope combination]. I’ll be able to pick a Ni–er off from two blocks down Main Street.” The speaker then looked pointedly at Darius.

When we wrote the slave auction scene, featuring Darius’s own ancestors, Louis and Gracie Gray, we used the same dynamic: a white man uttering an indirect threat or insult, fully intending that the black man hear it.
In this particular power structure, threats are sometimes covert, but unmistakable nonetheless. Conspiracy theories can invite adherents into thoughts and actions they would never consider in their normal state of mind. Allergic reactions to other human beings can be created, directed, and triggered. The rumors both Darius and I heard in the 1960s were terrifying, though in very different ways for both of us.
This is how we imagined and wrote the beginning of the slave auction scene in our second book of the Standing on the Promises series. Remember, this is the FAMILY HISTORY of Darius Gray. We researched his family line and slave auctions to get this as accurate as possible.

The auction would get conducted in a dank and shadowy place which used to be a prison. Happenings in this large room were not displayed in open light, for there were many, especially among St. Louis’s German population, who deplored slavery.

Nearly one hundred Negroes had come by rail, wagon, and steamer to meet their fate at this dungeon. They had been kept in sheds built for horses. Now they needed to appear healthy and eager to please.

Outside the auction room, Massa Gaines put on his frock coat and cravat so he could show his station. He did appear well-bred, with his combed dark hair, light skin, and pink cheeks. From the looks of him, he had never done more work than lifting a teacup or an eyebrow.

While Louis was waiting on the massa’s final preparations, he heard one of the slave drivers say: “You can manage ordinary ni–ers by lickin’ ’em, givin’ ’em a taste of the hot iron once in a while when they’re extra ugly. But if a ni–er really sets himself up against me, I can’t never have any patience with him. I just get my pistol and shoot him down. That’s the best way.”

The driver meant him to hear that, Louis knew for certain.

“Look sharp, boy,” said the massa. “I don’t want you mistaken for the ones getting sold. Where’s my top hat?”

“In the wagon, sir.” He had already taken two steps before calling back, “I’ll get it.”

But the moment Louis bent to pick up the hat, an eery silence fell like fog around him. He could sense something gloomy and important. Doors were opening. People were moving. He heard the shuffle of many feet, the clinking of many chains, the crack of a whip, moaning.

The slaves were coming.

Louis sat up. Then he couldn’t move. He kept repeating the words, “Lord, Lord, my Lord!”

The slaves, every one looking beat, were led to a trough of green water and given rags to wash themselves. The same driver Louis had overheard was yelling, “Get that dress off, gal. Don’ be thinking you got anything to hide. You clean up and get yourself presentable!”

Beside the trough was a bucket of lard, which the slaves were to smear over their bodies. Oh, they would be polished by the time they entered the big room.

Louis had forgotten why he had gone to the wagon. He returned to his massa without the hat, making a stunned apology when Gaines asked where it was. He didn’t try to explain how the sight of these poor, bound souls had stopped his mind and made him forget everything he ever knew. The top hat was still in the wagon.

“I’ll do without it. There’s no time now. Come on,” ordered Mortimer Gaines.

Louis obeyed, trailing him down the long, ever darker stairs.

The slaves were already inside and on display. Louis had to blink away the sun before he could take in the scene.

There they were, the whole mess of them. Most stared at the ground, waiting to be called to the block, which was actually a table. Children clung to their mothers’ skirts. The mothers knew, even if the children did not, that this could be their last day together for the rest of their lives. That knowledge showed in every mother’s face.

July 13, 2020
Do you see my people as representatives of Satan?
Next Post

July 15, 2020 Weeping with Darius as we wrote the auction scene
Recent Comments
0 | Leave a Comment
Browse Our Archives
get the latest from
The Welcome Table
Sign up for our newsletter
Related posts from The Welcome Table