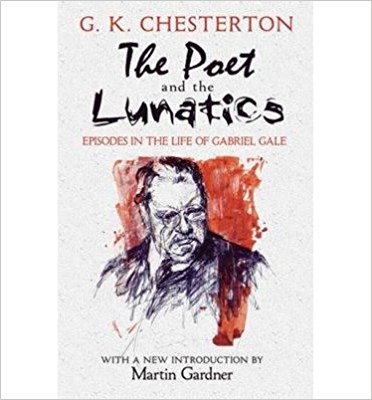 The blog title arises from G.K. Chesterton’s astonishing and yet little-known novel titled The Poet and the Lunatics. The protagonist is an artist named Gabriel Gale, who steps in to assist local police in solving a bizarre and inexplicable crime. He is deemed to be a lunatic by the “practical” characters in the story, which Gale does not deny (though he prefers to think of himself as a poet). To the contrary he asserts that when it comes to solving baffling crimes conjured in troubled minds, only the poets and the lunatics can get inside the head of a criminal perpetrator and solve the crime, which Gale also did. He said to the police:

What you want is an unpractical man. That is what people always want in the last resort and the worst conditions. What can practical men do here? . . . A man must have his head in the clouds and his wits wool-gathering in fairyland, before he can do anything so practical as that. [This is] a practical example of the occasions when the poet can be more useful than the policeman.

So this blog, “Poets & Lunatics,” captures my similar sense of how God works in this upside-down world: “God chose the foolish things of the world to shame the wise; God chose the weak things of the world to shame the strong,” (1 Cor 1:27). From this premise, I will explore — through my journalist curiosity, guided by moral conviction and informed by spiritual inclination — the stories of our times. “Poets & Lunatics” includes podcasts and recorded clips from past interviews, short news items and reflective essays, all from the vantage point that God works in this world and accomplishes his ends through surprising means, and often through fools.