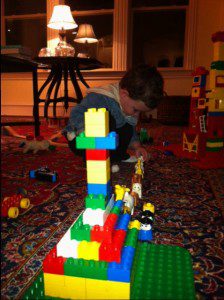 The phrase, “think globally, act locally” is attributed to Patrick Geddes, a Scottish philanthropist, town planner, biologist, and sociologist. The idea, though not the exact phrase, appears in his book, Cities in Evolution, which was published in 1915. Well ahead of his time, Geddes was at pains to argue for an approach to urban planning that took the surrounding environs into account.

The concept has been appropriated and broadened in its application to a number of endeavors, but it’s time that we apply it to the life of the church. As my friend and colleague, the Very Reverend Kevin Martin points out in analyzing the strategic plan developed by The Episcopal Church, referred to as “TREC” (Taskforce for Reimagining The Episcopal Church), the vision for the future is bright, but the content of the report is focused on enhancing and strengthening a largely centralized approach to doing church.

In a day and age when an increasing number of people think of themselves as spiritual, but not religious (i.e., I do God, but I don’t do church), strengthening a centralized system will insure the church’s decline as a denominational entity. SBNRs and Nones find it hard enough to connect the spiritual and religious “dots” in life. They find it even more difficult to connect the bureaucratic dimensions of church life with anything meaningful.

The emphasis on the reimagining of church on the larger, denominational stage also ignores an observation made some years ago by Princeton’s Robert Wuthnow, who noted that distrust and disinterest in judicatories could be traced to fundamentally disparate orientations. Denominational leaders, he noted, are populated by people from Wall Street and High Street: i.e., people who think of themselves (whether they are or are not) among the church’s financial and cultural elites). The vast majority of church goers are, he noted, from Main Street and constitute the core of the church’s membership.

Operating out of very different understandings of the church, the two do not comprehend one another and it takes leadership that reaches across that divide to cultivate the connection that we assume is ours by virtue of our “episcopal” nature. The only way to make that connection is to make the denominational and diocesan levels of the church the servants of the local parish.

Because that’s not the case in this report and because TREC continues to think of the church in ways that are analogous to our federal government (from which people are also largely alienated), I don’t believe this report bodes well. The future of The Episcopal Church is likely to be populated by scattered, largely free-floating congregations, whose fate will depend in large part on their ability to connect their ministries in meaningful ways to the spiritual needs of their communities.

The same fate awaits any mainline Protestant church that fails to think globally, but act locally.

Photo: Reimagining the Church with Legos, even that process is still local.

March 23, 2015 Basketball is Life
Recent Comments
0 | Leave a Comment
Browse Our Archives
get the latest from
What God Wants for Your Life
Sign up for our newsletter
POPULAR AT PATHEOS Progressive Christian
1

8 Things Christians Need to Stop...
All Set Free
Related posts from What God Wants for Your Life