The Making of Zombie Theologians: Catechesis, Spiritual Direction, and the Future of the Church 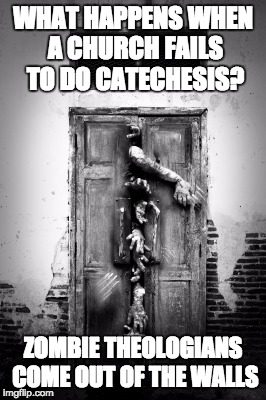 Over the years catechesis acquired a bad reputation. There were a number of reasons for this state of affairs.

In an age of growing individualism and disdain for every kind of authority, it is not surprising that catechesis became inextricably associated with a narrow, rote, and unsophisticated approach to theological formation.

Catechesis floundered for more mundane reasons as well. Not without reason, pastors, priests, and ministers of small congregations complained that they don’t have time to teach people the faith. Leaders in larger congregations often surrendered responsibility to staff members whose interest in “innovative” programs supplanted an interest in the perennial demands of basic Christian education.

The problem, of course, is that if you aim at nothing, you hit it.

That’s a problem in a spiritual discipline that depends upon questions that invite an individual to explore their relationship with God. While God can be trusted to find a way to work in any person’s life, we have made that task more difficult by failing to form people in the Christian faith.

Left to their own devices, far too many people have become “Zombie theologians,” left to wander impulsively, shaped by a ragbag of cultural messages and personal preference. Understandings of God, providence, prayer, and an endless number of other subjects which provide the basic furnishing of the Christian mind is missing; and what members of our congregations believe is often as Un-Christian as one could imagine.

If the church hopes to survive a Zombie Apocalypse of its own making, it will need to discover a lively, fresh, and faithful approach to catechesis.

September 24, 2015
3 Things Francis Taught Us Today about Politics
Next Post

October 17, 2015 Body Image and 5 Paths to Freedom
Recent Comments
0 | Leave a Comment
Browse Our Archives
get the latest from
What God Wants for Your Life
Sign up for our newsletter
POPULAR AT PATHEOS Progressive Christian
1

The Civil Rights Movement shattered white...
slacktivist
Related posts from What God Wants for Your Life