The Last Seven Words of Jesus: “Father, into your hands I commend my spirit.”

Today’s meditation reflects on the final and seventh of the Last Seven Words of Jesus.  All seven passages are from the Gospels, and they often serve as the focus of the church’s prayers on Good Friday.  Given the length of each mediation, I have chosen to offer one a day, ending on Good Friday.  This is the second of eight meditations.

“Father, into your hands I commend my spirit.”

With these words from the cross, Jesus dies as he lived.  And these final words echo the singular motivation that has governed the whole of his ministry.  The Spirit of God rested upon him at his baptism and drove him into the wilderness.  The angels who keep God’s council protected him there.  He healed people as he traveled the countryside but proclaiming the Kingdom of God always governed his efforts.

He taught, but his instruction baffled students of the Law because he did not listen to the letter of the Law or even to its logic.  Instead, he looked for the divine desire that had shaped it.  He forgave as one whose intimacy with the Father gave him both the authority and freedom to release those who were enslaved.

He did not wander into Jerusalem but set his face toward it.  He surrendered to the chief priest, the Scribes, and Pilate, but only because an intimate conversation with heaven made it necessary.  These words of Jesus from the cross echo his words to Pilate: “You would have no power over me, unless it had been given you from above.”  And now, in these final moments, he entrusts his spirit and, by implication, the outcome of his final struggle with death to God’s care.

What he accomplishes here no one else can repeat, and the sovereignty and freedom that he exercises is something no one else can fully imitate.  Yet, paradoxically, in these words Jesus also models for us a way of life — the inner logic of the Christian pilgrimage.  He tells Peter, “whatever you bind on earth shall have been bound in heaven, and whatever you loose on earth shall have been loosed in heaven.”  The intimacy and singularity of purpose that the Son shares with the Father is meant to shape the life of Peter, and the same divine desire is meant to shape our lives as well.

One would think that the beauty of his life would make that model irresistible.  But these are the hardest words to hear, because they require submission and that is not just difficult, it is anathema to us.

We live in the age of radical self-assertion.  We know what we want.  We want it now, and we resist anything and everything that stands in our way.  Our society is bent on self-assertion.  Our churches are built on it.  Even our preaching of the Gospel often sounds more like a course in self-esteem than a journey into the mystery that is God.  The language of submission and trust is like an anvil, thrown into a china shop.

There are countless tangled threads that shape the desire to assert our independence.  Some of that resistance lies in misunderstanding and fear, the fear that a wholehearted love of God will rob us of all our other loves is chief among them.  We forget that everything we have God has given us, and that it was God who declared creation good.  God does not rob us of our loves, but in loving us, orders all of our other loves, so that they do not consume us.

We are also afraid that in loving God we will open ourselves to abuse and exploitation.  But it is worth remembering that there is nothing in the example of Jesus that obliges us to live the life of victims or to perpetuate generations of cruelty.

Jesus may appear to be helpless.  There is even a strain of Christian theology that would suggest that Jesus was a passive victim.  There are also metaphors and images from Scripture, which if used in isolation would underline that impression.

But those images also offer an incomplete and potentially misleading picture.  Jesus is not a masochist.  His experience is not an endorsement of violence or victimhood.  He is victimized, but he is not a victim.  He may be put to death, but the death he suffers is one that can only happen because those who put him to death are given the power to do it from above.  He entrusts his spirit to God, not his tormentors.

In that regard, Jesus is more like a combatant with resources that appear to be more limited than those at the disposal of the enemy.  Hence, a faithful imitation of his example is that of a Dietrich Bonhoeffer who returns to his native Germany from Manhattan to battle Nazism in 1939, knowing that his only weapons are the Gospel and resistance.

And therein lies a dangerous temptation, the one that Jesus resisted in the wilderness, in Gethsemane, and now here — and in truth, throughout his ministry.  It is the perennial struggle to live into the freedom that only God can give us.  To resist the power of the grave that asserts itself in life.

And now, in these final and darkest of days, we are invited to trust the one who has entered the heart of darkness and knows the way through.  The only question now is whether we will follow.

“Father, into your hands I commend my spirit.”

In the same way,

Give me the strength to surrender,

To abandon my striving,

To find new freedom by measuring

The limits of my strength.

Help me to find light in the darkness,

Between your death and resurrection,

For you alone can conquer death,

And deliver us from the mortality,

That haunts all our days. 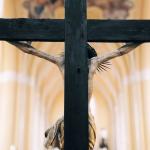 So, where has our journey taken us and what are its implications for our spiritual lives?  The answers to questions of this kind will require more time than it will take to read this final reflection.

What we have learned along the way is underpin by two fundamental convictions: One, that the last words are first words, in that with each of the seven sayings from the cross, Jesus inaugurates a new reality.  Two, those realities are fundamentally the work of God in every sense of the word: In Jesus, God is the actor.  In Jesus the claims of God to be God are vindicated.

And we have learned something about the nature of that new reality: In Jesus the possibility of forgiveness is embodied.  On the cross, Jesus announces the mastery of death.  From the cross the reconciled and reconciling body-life of Christ’s church is inaugurated.  In the cross we are embraced by the one who enters our loneliness and alienation.  With the thirst that Jesus experiences, God embraces the whole of our human existence.  With the words, “It is finished”, Jesus announces the completion of that new reality.  And with his surrender to God’s keeping, Jesus reveals not only the singularity of purpose that motivates the saving work of the Triune God, but he models the same surrender for those of us who would follow him.

The last-first words of Jesus are an invitation to embrace that new reality.  What it means for you in the particular is something that I hope you will explore in the days to come.  To own your place in the work of God is thread-through with possibilities.  The possibility of participating in something larger than yourself, something enduring and eternal, something connected with the purpose of our very existence.  What that will look like can be found in the fabric of your life: Your gifts and graces, your strengths and passions, your relationship with God and other human beings.  May your prayers during this holy season give shape to the days ahead.

April 17, 2022 Looking for the Living among the Dead
Recent Comments
0 | Leave a Comment
"I spent a week at Regina Laudis back in the mid-80's and I was awed ..."
Karen Silver The Church, the Future, and the ..."
"Thanks for the honesty of these observations. There are two separate questions in play, and ..."
jekylldoc Navigating the Decline of America’s Seminaries
"I'm just content that my kids and a few good friends let me rant without ..."
bill wald Theology and the Church
""I am tired of listening to people who think they know everything about everything and ..."
Frederick William Schmidt Theology and the Church
Browse Our Archives
Related posts from What God Wants for Your Life

Progressive Christian
The Last Seven Words of Jesus: "It is...
What God Wants for Your Life

Progressive Christian
The Last Seven Words of Jesus: "I thirst."
What God Wants for Your Life

Progressive Christian
The Last Seven Words of Jesus: “My God,...
What God Wants for Your Life