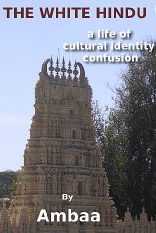 Is it possible for a non-Indian woman, an American of European decent, to be a Hindu?

Sometimes the religion that you’re born into isn’t the right one for you. What happens when the religion you fall in love with is one that traditionally does not accept converts? Both an ethnicity and a way of life, Hinduism is considered by many to belong only to Indians.

Ambaa, a white woman in America, forged her own path into Hinduism. Her spiritual journey through writing and connecting with others shows the power of pure religion to overcome the boundaries and separations of race and ethnicity.
Her story is a fascinating journey of a young woman’s struggle to find identity in the melting pot of America.

There are more and more white Hindus and non-Indian Hindus every day. How do they make a place for themselves in one of the world’s oldest religions? Do they take on Indian culture and customs as well as religion? Or do they make it their own?

This book is for anyone who wonders:

The essays in this book, based on the popular White Hindu blog, explore a variety of the issues that non-Indian Hindus struggle with…

This book is a collection of essays about culture, identity, religion, language, and humanity tracing one woman’s spiritual journey from defensiveness to peace.

“I do believe that Hinduism is universal, it is for all people. Every scripture, every piece of Advaita talks about the unity that pervades the creation. We are not our superficial differences, we are all one God.

I don’t believe that anyone should be told not to do something because of his or her skin color or ethnicity. I come to Hinduism with respect and deference and I know that my soul is the same as anyone else’s.” –Ambaa 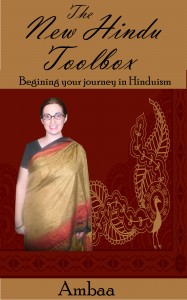 A simple guide for getting started in your Hindu lifestyle. Includes a six week program to ease you into home worship and finding a local community as well as essays on a variety of topics important to new practitioners of Hinduism, such as Do I Have To Be A Vegetarian? and How Do I Tell My Family?