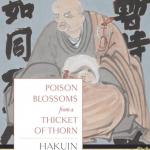 This post continues the series on the teaching of the great Rinzai teacher Hakuin Ekaku (白隠 慧鶴, January 19, 1686 – January 18, 1768), celebrating the publication of The Complete Plum Blossoms in a Thicket of Thorn (CBP), translated and annotated by Norman Waddell.

What follows is a reflection on one of the sections in “Book Eight: Religious Verses,” interesting to me because in it we meet an old Sōtō priest who takes up a kōan. The passage also includes a common theme in Hakuin’s teaching – don’t waste your time lulling in comfortable meditation. Instead, work your edges, follow the living vein of inquiry, and wake up.

387. Sending Off Reigaku Zogen, with Preface

“IN SPRING OF the first year of the Kampō era [1741], when I [Hakuin] was lecturing on the Blue Cliff Record at Keirin-ji in Kai province, Reigaku, the venerable master of Keiun-zan, came to see me.”

We meet Hakuin here at age fifty-seven, in his teaching prime, and lecturing on the Blue Cliff Record. The assembly for this teaching was at a temple in Kai province, some seventy-five miles north and on the far side of Mount Fuji from Hakuin’s home temple, Shōin-ji, in Hara. It is notable here how respectfully Hakuin addresses Reigaku – “the venerable master.”  Waddell tells us that the priest Reigaku was probably a Sōtō priest, but nothing more is known about him or Keiun-zan, his temple.

“I asked him the question, ‘Where do you come from when you are born? Where do you go after you die?’ Reigaku made no reply.”

Reigaku is a “venerable master,” a temple abbot, but apparently had yet to clarify the great matter birth and death. It also seems that he is an old man, so with no time to waste, Hakuin gets right to the point – what is birth and death? Reigaku breaks into a sweat, shuffles his feet, and rubs his head unable to respond heart to heart. And having been in a similar position, although not so old at the time, my heart goes out to the old boy. “All that practice,” I hear him saying to himself, “sesshin after sesshin, and yet the dharma is not flowing from my heart.”

I imagine that Reigaku heading back to his home temple, Keiun-zan, with his head hanging, feet dragging. Perhaps there were other monks there, young and old, eager to hear about his encounter with the great teacher, Hakuin. He tells them the story, then redoubles his devotion to sitting. Now, however, he and his fellows, instead of silently illuminating themselves, spending all their “…time seated like lumps in long, lifeless ranks, nodding away like oarsmen (1),” they throw themselves into the inquiry of the kōan Hakuin had compassionately offered: “Where do you come from when you are born? Where do you go after you die?”

Despite Hakuin’s scorn for Reigaku’s silent illumination sitting, it may well have been due in large part to that strong and stable base, the deeply settled mind of the Sōtō school, that propelled Reigaku’s efforts to bare wonderful fruit. Eventually, the kōan broke open, and his heart was finally at peace. Buddha Shakyamuni described this as “…having done what needed to be done.”

Then, although Keiun-zan is at least seventy-five miles and on the opposite side of Mount Fuji from Hakuin’s Shōin-ji, and although he is an old man, Reigaku simply must see his teacher and present the truth that he had realized. Time and again in the old records, we find the ancients in our Zen way broke through the barriers of reluctance and comfort.

“Now in the second year of Kampō [1742], just before the Buddha’s Birthday, Reigaku boarded a boat in Kai province, rode down the swift Fuji River to Suruga province, and came to Shōin-ji to continue his study with me.”

Waddell notes, “Reigaku would have had a quick and exciting journey down the rapidly flowing Fuji River. It arises in the highlands of Kai province north of Mount Fuji, flows down west of the mountain, and empties into Suruga Bay.”

I see old Reigaku with bushy white eyebrows, bright eyes, and flowing black Sōtō robes racing down the rapids, hanging on to the sides of the boat, risking life and limb, just to meet Hakuin again. He makes the practice of running to dōkusan (aka, sanzen) seem really tame!

Happily, Reigaku succeeded at not drowning, and manages to again meet the great teacher. Seeing the old Sōtō monk returning for direct encounter must have made Hakuin smile through and through. Getting a whiff of Reigaku’s kenshō had to warm his heart, knowing that his life purpose, to help living beings realize the truth of the buddhadharma, was being fulfilled one kenshō at a time.

“I [Hakuin] asked him, ‘Where do you come from when you are born? Where do you go after you die?’ Reigaku raised a finger.”

Hakuin, by all accounts a demanding teacher, didn’t settle for anything but a full-body, clear and strong, Now! presentation. Holding up a finger like Juzhi did not reach it (2). As Nyogen Senzaki said, referring to how some of his students played with kōan presentation, “Until you can prove yourself in real freedom beyond birth and death, you are just a bad actor, after all” (3).

Yet, here with Reigaku, Hakuin doesn’t seem to see a bad actor. If he had he would have sent Reigaku scurrying (or toddling) with shouts and blows. Reigaku must have been sufficiently clear for Hakuin to energize Reigaku toward full transparent brightness:

‘Where do you come from when you are born? Where do you go after you die?’ he [Reigaku] replied.”

This is an intriguing peek into how Hakuin met students face-to-face for kōan introspection. Reigaku’s words, “Where do you come from when you are born? Where do you go after you die?”, have flavor in their plainess. Hakuin, by stepping into Reigaku’s soggy straw sandals, verified Reigaku’s awakening. So a good time was had by all. Light and happy music played softly in the background.

“Cherishing the awakening that old priest had achieved, I composed a verse to give him. He tucked it in his sleeve and took it back to Kai province.”

“Cherishing the awakening” stands out here. Teacher and student meet buddha face to buddha face. Then with no further adieu, Reigaku tucked up his sleeves and returned to Keiun-zan, this time with a different story to tell. Waddell notes, “On his return trip to Kai province he probably would have made the long and strenuous hike over the high passes to the east of the mountain.”

“Don’t you regret the misfortune of a wasted life and idle death?
Those many years of sitting and silently illuminating yourself?
Don’t say the practice of Zen does not yield miraculous results,
Eyes won’t open for some till they’re losing their hair and teeth.”

Curiously, this verse doesn’t seem to be about Reigaku or even for him. He had, after all, just realized kenshō and yet the verse is about the regret of not realizing and a warning not to disparage the power of the Zen way. So what is Hakuin doing with this verse? In Hakuin’s perspective, the Sōtō path in his day had become overgrown and lifeless with practitioners lulling away their time in silent illumination, a passive, do-nothing, waste of time. Incidentally, Hakuin was equally critical of some practitioners in his own Rinzai school, hobbled by the “…dry and lifeless methods of ‘Unborn Zen.’” In our day as well, lots of zazen without kōan introspection can lead to powerful concentration, however, many practitioners slide past the point of cultivating verification, expressed here as “Where do you come from when you are born? Where do you go after you die?”

So perhaps Reigaku was just the messenger to the Sōtō monks that trained with him or with whom he associated. And because Hakuin decided to include this incident and verse in the record of his teaching, his audience for his message includes those in his time and beyond who might be suffering “…the misfortune of a wasted life and idle death.”

The message of the verse is simple and direct, and reverberates with the “Evening Message,” recited at the end of the day in both Rinzai and Sōtō training centers to this day:

Spoken to the great assembly:
The great matter is birth-death
Impermanence is swift!
It’s fitting for everyone to sober up! Wake up!
Do not let [this opportunity] pass by” (4)

(3) Eloquent Silence by Nyogen Senzaki p. 198. Thanks, Alan, for pointing this out.

February 12, 2018
Will You Be Aware of Your Own Awakening?
Next Post

Buddhist
You Have To Do It On Your Own:...
Wild Fox Zen