Right To The Point: Reflections on the Implications of Hakuin’s Zen 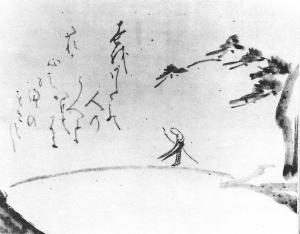 Why don’t you build
a jointed bridge
with your free mind
for the people
passing through the world?
– Hakuin

The teaching of Hakuin Ekaku (白隠 慧鶴, January 19, 1686 – January 18, 1768) is one such jointed bridge, and now a lot of it is available to English-reading practitioners through the extraordinary skills of translator Norman Waddell, most recently through the publication of Hakuin’s record, The Complete Poison Blossoms in a Thicket of Thorn (CPB).

A careful read is especially important, in my view, for people engaged in kōan introspection to counteract the present tendancy for the practice to unmoor from zazen, awakening, and compassion.

On the Vine of Obstacles: Online Support for Zen Training we are just concluding a twelve-week practice period on Hakuin’s teaching and this summer at the Nebraska Zen Center, our summer practice period is upcoming: “The Luminous Teaching of Zen Master Hakuin.”

So today I have some reflections on what I’ve learned from seeing “people passing through the world” taking up Hakuin’s teaching with dedication and diligence.

Primarily, the clarity of Hakuin’s teaching on the vital importance and real possibility of kenshō has energized the practice for many students on the Vine. For those with a taste of kenshō, this study has clarified the role subsequent kōans play in the our waking-up-and-living-accordingly projects. This is largely due to the context – the jointed bridge – that Hakuin built with his free mind. Those joints include his ordinariness, ongoing introspection, and radical immanence. I’ll touch on each of these in what follows.

Hakuin presented as a complex real person with confidence and humility, open to his readers regarding his own stinkiness, replete with scatological humor. A couple examples:

In CPB “63. Instructions from the High Seat During the Summer Retreat at Ryōtan-ji:”

“They asked me to say a few words today at the beginning of this sacred meeting. I searched my parched-up bowels high and low, not once but a hundred, a thousand times. I was still unable to come up with a single word worth smearing like warm shit over their young faces.”

This kind of humility at the beginning of Hakuin’s lecture series, sometimes delivered to hundreds of practitioners, is common, and seems to go beyond the customary and perfunctory self disparagement. When Hakuin gets down on himself, he does so with wild abandon.

Similarly, Hakuin opening confesses his self-clinging and reveals a heart quite free from the spiritual masquerade (quite in contrast to the “great man theory” in some contemporary Rinzai lines).

Here’s an example from when someone donated rocks for Hakuin’s garden at Shōinji. The rocks had to be transported across the ranging Fuji River (from CPB, “293. Thanking Gentoku Rōjin for a Gift of Remarkable Spirit Rocks”):

“All of a sudden we heard the lookout’s cry, ‘The raft is coming!’
A wave of joyful commotion passed quickly through the crowd,
Nimble-footed men began hurrying about calling to each other,
I yelled ‘Are the rocks secure?’ oblivious to raftsmen’s safety.”

Like if your partner had a car accident and you first asked about the car, Hakuin yelled “Are the rocks secure?” and then “Whoops!,” he seemed to have acknowledged, “how stinky I am!”

In CPB “187. To Layman Ishi,” Hakuin wrote (but attributed this passage to an unnamed and unfound other), “If students of the Way want to confirm whether they have truly entered realization, they must examine their mind thoroughly both in the activities of everyday life and amid the tranquility of zazen. Is the mind in the realm of active life different from the way it is during meditation? Do they hesitate or have any trouble in penetrating the various meanings of the words of the Buddha-[ancestors]? How could someone who has thoroughly grasped the marrow of the Buddha-[ancestors] possibly fail to understand their words and sayings?”

Examine the mind. Confirm. Hesitate? Trouble? This leads to aspiration to go more deeply and thoroughly into the buddhadharma. Also significant in the above passage is Hakuin’s advice to practice amid the activities of daily life.

In CPB “115. Instructions to the Assembly in Response to a Request from the Priest at Daifuku-zan” Hakuin makes a clear and powerful connection to the “for people passing through the world” line of the above verse:

“But if you do not get buggered up in your present attainment, if you strive day and night to put the four universal vows into practice, striving to lead all sentient beings to salvation and create a Buddha-land on earth, acquiring the deportment of a Bodhisattva and storing up great Dharma assets, preaching the Dharma unflaggingly to benefit sentient beings for endless kalpas — repaying in this way the profound debt you owe the Buddha-[ancestors] — are you not then a most loyal and trusted minister of the Dharma King, a person who has fully realized the four great Dharma vows and put them into practice?”

Like all the great reformers, Hakuin offers old wine from new bottles, returning the tradition from transcendence to radical immanence. One example of this is a verse Hakuin wrote when one of his students was going off to take care of his sick father (CPB, “362. On Sending Dōka Zennin Off to Visit His Father”).

“About to set out for home to visit his ailing father,
Dōka set paper down before me asking for a verse.
As he insists on a phrase that is ‘right to the point,’
I sit chewing my brush, secretly furrowing my brow.”

Dōka Zennin was later known as Tōrei Enji (1721–92), a very important successor of Hakuin, although the lineage technically comes to us through Gasan who trained with Hakuin during the last year of Hakuin’s life. After Hakuin’s death, Gasan, already a student with a couple decades of training, worked with Tōrei for nine years. Tōrei gave Gasan transmission, but did it in Hakuin’s name – not at all standard. Gasan then became a central figure in revitalizing Zen in the spirit of Hakuin. He taught in present day Tokyo and is said to have had 500 monks in his assembly.

But back to Hakuin. Waddell shares an annotation, “’I sit chewing . . . my brow.’ Is this the line that is ‘right to the point?’ People who have heard the sound of one hand find this extremely interesting.”

Hakuin’s expression of “right to the point” might slip past unless you’ve experience radical immanence through “the sound of one hand,” “mu,” “the east wall strikes the west wall,” or any breakthrough kōan. Just sitting might do it too, of course.

That’s one way to talk about Hakuin’s teaching and the power of it to revitalize Zen today, whether you’re of the kōan or just-sitting ilk – right to the point and hidden in the open.

May 3, 2018
Fierce or Friendly: Koan Introspection for Hakuin and Today
Next Post