That Other Story About Iron Grindstone Liú

Grindstone said, “I won’t go there.”

Grindstone said, “Venerable, is there someone who goes upside down?”

Hakuin said, “Where the darkness and the light do not reach, there is a good view.”

Iron Grindstone Liú was a close disciple and successor of Guīshān. Even though she was one of the few women to receive transmission in the good old days of Zen, she does not have an entry in the Record of the Transmission of the Lamp. And despite all of her grinding away at the half-baked understanding of various (male) practitioners, there are just two known stories about her – this one and the better known “Guīshān and Iron Grindstone Liu.” that begins, “Old cow, you’ve come!”

See Melissa Blacker Rōshi’s wonderful article in Lion’s Roar for the remainder of that case and her commentary – click here.

Regarding the Grindstone, Hakuin said, “After considerable exertion, having broken through ten thousand miles of barriers, finally you come to the time when the six nations are cleared.”

That is, Grindstone has not only realized the undivided heart but worked through post-kenshō barriers to actualize in daily life so that peace reigned far and wide.

In the present case, we have two wonderful adepts playing with the buddhadharma like it’s hacky sack. Unfortunately, we also don’t know much about the other character, Zǐhú. We do know that in the Record of the Transmission of the Lamp, Zǐhú is listed as a successor of Nánquán, a dharma brother of the Grindstone’s teacher, Guīshān. And this case is the one story included for Zǐhú. (2)

Yuánwù, however, in his commentary on the Blue Cliff Record, has this:

Zǐhú had heard about the Grindstone’s exploits and was favorably inclined, despite their different styles. While he was prone to slip away, the Grindstone ground away. Here, however, there is no mention of his warning sign for his dog. He just wonders if she thinks she’s a fit person to carry such an awesome name.

As if changing places, Grindstone tries to slip away, being a person of neither yes or no – “I won’t go there.”

The dialogue, you may remember, began with Zǐhú wondering, “Is there someone who …” and Grindstone now shares her wondering – you can go left and right but are you someone who can go upside down? In other words, are you upside down in this world of upside down views? So, just to be clear, are you right side up?

And that’s the story. Yuánwù, though, uses this as an example of someone raising an interpretation, missing the point, and getting hit. He sees Grindstone’s “Venerable, is there someone who goes upside down?” as a the-horse-already-left-the-barn interpretation and even has Hú hitting her before she finished speaking.

I say, baloney! If Grindstone’s words were interpretive, then Zǐhú too missed the mark. If they’re both wrong, then everytime words are spoken by anyone, a clear-eyed person would just strike. Muttering along as he does, Yuánwù’s name is right there, clear as day, on the same indictment as Grindstone and Zǐhú.

Xūtáng and Hakuin both see the point here to be about practicing don’t know mind in our daily life encounters, in this case with an outsider – a woman adept in male dominated Zen. “Where the darkness and the light do not reach, there is a good view.”

So although this case is complete, the implications roll on and on.

How do you relate?

(1) “Empty Hall is Xūtáng. For more about him, click here.

(2) Record of the Transmission of the Lamp, Whitfield, V3, p. 58. This story also appears in commentary to the Book of Serenity, trs, Thomas Cleary, p. 253.

October 2, 2018
The Truth of the Self Through the Generations of Our Lineage
Next Post 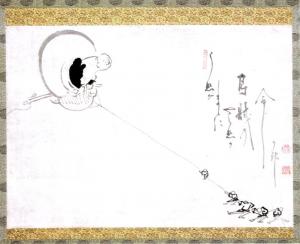