And All God’s Children Said “Waheguru” 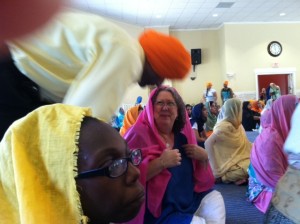 The Sikh Religious Society of South Carolina held the opening and dedication for their new gurdwara building on June 16. It was a lovely affair marked by the beginning of sung prayers (kirtan) on Friday at noon, and lasting until sometime on Sunday. (I’m in awe of those musicians!) The new building is beautiful, the colorful saris and scarves to die for, and the langar meal afterwards was delicious, as always. Sikh leaders were most anxious that religious leaders from as many religions as possible be in attendance at the big ceremony on Saturday. I was honored to attend, and also to represent the Pagan community. I also sent the Society a formal letter of congratulations. There were Sikhs from other regions present, an Indian diplomat, and friends from all over the two Carolinas and Georgia.

Why do I spend a rare free weekend day sitting for hours in a service conducted mostly in a language I cannot understand? First of all – I was invited, invited by their leadership to attend in my role as a member of the board of directors of Interfaith Partners of S.C. Second, I love the color, love the warm welcome I receive (hospitality is one of the central tenets of the Sikh faith), love watching the panorama of humanity.

Everyone (well, everyone who is Sikh, at least) walks up the center of the worship space, kneels and prostrates themselves on the floor in front of an elaborate canopy showcasing Sikh sacred texts, leaves money under the canopy (and sometimes in front of the musicians), and then takes a seat on the floor. I noted that when our 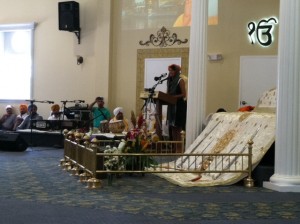 governor (The Hon. Nikki Haley was raised Sikh in this very congregation, or sangat, though she has joined the Methodist church since marrying a local boy) entered the sanctuary, she was accompanied only by her two children, no security in sight, and with no fanfare at all. You will see her address the sangat in the video linked below.

Women and men sit on different sides of the sanctuary, so I see a lot of small children and babies each time I visit. I am charmed by the way the children toddle and scamper about through at least three hours of the service. No one looks ill-tempered, no one is acting out, and no adults seem the least bit perturbed by the little ones, only occasionally shushing them or sending someone back to their own mother. Seniors are shown a loving deference, too. On my last visit, the arthritis in my hips was raging after sitting cross-legged for so long. When I struggled to rise, several younger women jumped to their feet and hurried to assist me. It was a little embarrassing, but I felt so loved and respected that I immediately got over my embarrassment. 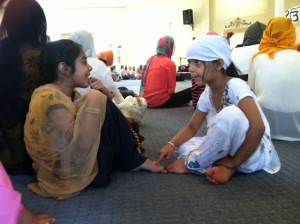 Some people quietly sing along with the musicians, closing their eyes in prayer. Others may come and go; I have found that there are many people, especially women and young folks, outside the sanctuary. They may be visiting in seats under a nearby pavilion, nursing or changing a baby, or scurrying about taking care of such business as is required when one invites in two or three hundred guests. I’ve noticed that the moment I cross the threshold I feel a change in the atmosphere. I find the long passages of harmonium and tabla quite conducive to a meditative state. The somewhat casual atmosphere created by the presence of all ages, steady comings and goings, and random seating on the floor, adds to my relaxed state. It becomes easy for me to imagine that we really are all one, that all religions have some unifying element, in such a peaceful gathering.

Too bad that mainstream media must use the lens of controversy as often as possible in order to draw viewers. Then again, it’s their job to keep me informed about the world I live in. I was reminded of this as I visited the web site of our largest television outlet to see their coverage of the gurdwara dedication. I only mention the word controversy because that’s the lead for WIS-TV’s coverage here. But all issues seem to have been resolved and the story ends on an upbeat note.

Another day I’ll write about some of the cultural observations I made that day – about the pride of this congregation that one of their own sits in the Governor’s seat, about head coverings, waheguru, sacred symbols and more.

June 21, 2013
My Long Strange Journey to the World of Interfaith
Next Post 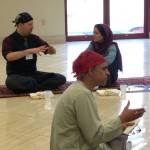 June 25, 2013 Religious Leadership Diversity Workshop at Hartford Seminary: a Review
Recent Comments
0 | Leave a Comment
"I do not know how I have not seen this article before. Wonderful to read ..."
Donna Donovan Interfaith in Prison
"David - I am not totally sure if you are the same David who said ..."
T B Interfaith as a Pagan: Assumptions
"Wow - powerful story, Sage. Thank you."
Holli Emore Blood Feud
"On the subject of cutting things out of one's life without understanding how they are ..."
Sage Blackthorn Blood Feud
Browse Our Archives
get the latest from
Pagan
Sign up for our newsletter
POPULAR AT PATHEOS Pagan
1