As I mentioned briefly in my prior post, I spent the week of June 8 through June 14 at Hartford Seminary attending the Religious Leadership Diversity Workshop.  The workshop has been running for a few years, and the seminary works to bring together people of various faiths to try and create an experience for attendees that both allows for the sharing of personal stories and points of view and helps to educate them on various faiths and faith practices as well as multifaith chaplaincy, conflict resolution, and religious leadership.

In short:  it was a moving and intellectually thrilling experience.

For a week, I worked with Christians, Jews, Hindus, a Muslim (from Singapore), a Jain, a Buddhist, and a variety of people who defied simple classification under a label.  Even better, introducing myself as a Witch and a Pagan may have raised a few eyebrows, but it didn’t result in a feeling of being ostracized or excluded from the experience in anyway.  In fact, if anything, being upfront about my own personal story opened the door for a variety of learning experiences both for myself and for others as we spoke throughout the week.

Organized around lectures, the workshop had two primary “tracks.”  The first was to share information about specific faiths and practices and the second was to dig into questions of leadership in a multifaith situation.  Because of the time constraints, we didn’t have any formal presentation relating to Judaism, Christianity, and Islam–all of which I personally wish we had the chance to touch on–with the exception of a presentation by the Church of Jesus Christ of Latter Day Saints.  Instead, we had presentations that focused on Dharmic religions including Sikhism, Buddhism, Hinduism, and Jainism.  And, I was also able to present about Paganism to the group formally as well as during informal conversations.  Finally, we also spent a day visiting a local Sikh Gurdwara, a Hindu Mandir, and a Buddhist temple to witness and experience a bit of those three faiths in practice.

The presentations relating to leadership were at least as interesting and potentially more valuable than the informational presentations.  It cannot be stressed enough that the ability to hear about and learn from people practicing a specific faith or philosophy is a fantastic way to learn more about it, but there’s a lot of opportunity to do so.  It’s harder to get a group of various religious leaders in the same room and discuss techniques for working together in situations more delicate that service projects or other more common interfaith situations.

Instead, we looked at situations where people of different faiths and philosophies were thrust together in ways that you may not expect.  For example, we studied the case of a Baptist hospital chaplain who helped a Jewish family as a member of their family lay dying before them.  Upon entering the room, we learned it was clear to the chaplain that he was working outside his own faith when he saw the men in the room wearing yarmulkes, the traditional Jewish skullcaps.  When he asked if the family would prefer that he help them find a Rabbi to hold space with them, the family declined, indicating that his God was their God and that he should stay.  Granted, not all Jews (and not all Baptists) would agree with that statement, but in that time–in that place–the differences of belief and practice between the family and the chaplain faded away when faced with the human need to grieve with family and, for some, with spiritual guidance.

If there was one thing that became more and more clear to me throughout my time at this workshop, it’s that there is nothing more dangerous than generalizations.  Not only is there great differences between faiths and philosophies, there is diversity within those faith groups as well.  Just as we in the Pagan community sometimes struggle to relate to and understand the members of our complex and growing family, every other faith does as well.  And, what we often think of as a homogeneous philosophy guiding other faith communities is as heterogeneous as ours.  Case and point, I was stunned when our Buddhist colleague presented on the diversity of her faith in American sharing with us over 20 different “streams” (her term) of Buddhism that can be found in our midst.

Additionally, something else was, once more, driven home for me:  learning about and experiencing the faiths of others doesn’t cause one’s own faith to become more shallow.  Perhaps counter-intuitively, doing so causes it to deepen and become stronger.  As my colleagues asked me questions and I was forced to explain my own way of thinking and share with them, as best as any individual can, concepts relating to Paganism, it forced me to focus on what it is that I do believe.  They challenged me to share with them my faith and, in so doing, they also challenged me to re-examine my choices and to re-affirm them not just internally but publicly.

On our final day, we were asked to share a blessing from our own tradition if we were moved to do so.  I decided to take a prayer from my Jewish heritage, the Shehecheyanu,  and rewrite it based on the morning devotional of the Solitary Druid Fellowship.  It was well received and offered next to the singing of one of the psalms, the sharing of Hindu prayers in spoken in Sanskrit, the offering of gifts in the Native American style, and–very special to myself–the Shehecheyanu in Hebrew.

But perhaps most amazing was the prayer offered by a Catholic priest, a Pauline.  He stepped forward with his iPhone in hand and explained that he was there to offer an embodied prayer.  Hitting play, a men’s choir singing a psalm accompanied by a guitar sounded in the room.  The priest stood, took a deep breath, and began to perform yoga before us juxtaposing his movements in time with the singing of a Christian hymn.

In many ways this represented, to me, a perfect synthesis of what it means to understand each other:  we can grow within our own faiths by encountering those of others’.

And, in so doing, everyone is made stronger. 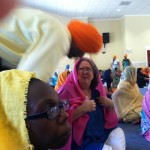 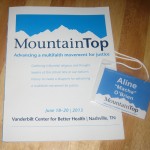 June 25, 2013 MountainTop I
Recent Comments
0 | Leave a Comment
Browse Our Archives
get the latest from
Pagan
Sign up for our newsletter
POPULAR AT PATHEOS Pagan
1

Celebrating the Dead, Decay and Letting...
Charged by the Goddess
Related posts from Wild Garden

WITCHCRAFT SAVED ME FROM TOTAL DESTRUCTION - THE...
What if you only had 40 min to grab your belongings, animals,...
view all Pagan blogs
What Are Your Thoughts?leave a comment
Copyright 2008-2020, Patheos. All rights reserved.