For my first trick, I’m providing you all with a somewhat vanilla introductory post about myself.  Why? Because as you read this, I’m attending the Religious Leadership Diversity Workshop at Hartford Seminary and, therefore, I’m hoping that my second trick will be pretty awesome.  Also, we’ve never met and I figure it might be nice for you all to have a sense of who I am.  Finally, there’s a snake at the end of this article.

I was born into something of an interfaith family.  My mother’s family is Christian while my father’s is Jewish.   While my mother converted to Judaism and the religion of my childhood was the same, we would still celebrate holidays and life events in a Christian setting with our extended maternal relations.  I actually recall one of the first times that I was in a Christian church and my mother had my sister and I write down anything that we did not understand.  Everything from the context of the pictures in the stained glass to the items on the altar to the theological underpinnings of what was going on was fair game, and my mother did her best to fill us in on what it was that we were experiencing.

It was after my Bar Mitzvah that I eventually left Judaism.  I was invited to read from the Torah and through a series of unfortunate events, I was woefully unprepared to do so.  I gave it a shot, made it about six words into the passage, fumbled the seventh, and then burst into tears.  At thirteen years old, that’s a major problem and it was likely due, in no small part, to my own embarrassment that I didn’t return to shul for some time.  And, it was during that time, that I started reading about other faiths.

I started with Christianity.  It’s strange, perhaps, in America to have to learn about Christianity.  But, while I was surrounded by Christians and grew up across the street from a Methodist church, I found that I didn’t have much in the way of an understanding of the theology of the religion.  From there I–somewhat logically–started to read about Islam.  Then, being in high school, I met a nice young woman who just happened to be a Buddhist.  So, obviously, I started reading about Buddhism.  While more attractive to me than some of the others, neither the religion nor the young woman stuck.  But, eventually, I encountered Paganism and, like she did when I asked her questions about Christianity, it was my mother who purchased for me my first Wicca 101 book, the venerable Cunningham’s Guide to a Solitary Practitioner.

The rest, as they say, is history.

I’ve been walking a Pagan path for about 15 years now, and I’ve been involved in interfaith efforts for about the last 10 of those.  Primarily, I did so first as a member of an undergraduate student organization when I attended school and, later, as a staff adviser to another such organization.  Those groups opened doors connecting me to other students of different faiths and of none.  Especially as a staff person, I was able to sit on panel discussions not just to educate others about Paganism but also to engage others about the similarities and differences between their faiths and philosophies and my own.

It was through a student organization that I first also began to be involved in interfaith activism.  At the time of this writing, my day job is as a professional nerd for the University of Illinois.  At Illinois, a student organization named Interfaith in Action brought students together to work on a common cause but also provided them the opportunity to reflect on why they were doing so.  Was it motivated by their faith and, if so, why?  Or, perhaps it was a more humanistic ideal that led them to help out.  Regardless, it helped to create a context for why a person serves and not just how.  I was less involved in such efforts than I should have been.

More recently, and with some controversy, I’m exploring the creation of a Pagan chapter for the Foundation for Religious Diplomacy.  While the terms “interfaith” and “religious diplomacy” sound synonymous, they’re slightly different.  Interfaith efforts often bring people together to find common ground and similarity.  But, religious diplomacy, like international diplomacy,works from our differences in an effort to find mutual understanding.  I hope to report on these efforts here as time and progress permits.

In closing, I thought I’d rapid fire out some other details about myself.  I’m happily married to a Catholic continuing my trend of interfaith relations.  She’s a veterinarian which, as you might suspect, means we have pets.  10 of them, in fact:  2 dogs, 4 cats, and 4 snakes.  Yes; snakes.  They live in my house.  With us.  Sometimes, I hold them.  I also have tattoos (five at the time of this writing) and one of them is of one of my snakes (pictured).  I’m a solitary eclectic and I’ve been using the liturgy of Solitary Druid Fellowship.  I work primarily with the Hellene cosmology, mostly Prometheus and Eris.  Yeah, I’m an Erisian; not a Discordian, though.  Those dudes are nuts (I keed, I keed).

(I told you there was a snake.) 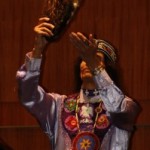 June 15, 2013 News Arboretum
Recent Comments
0 | Leave a Comment
Browse Our Archives
get the latest from
Pagan
Sign up for our newsletter
POPULAR AT PATHEOS Pagan
1

What It Means To Put Your...
John Beckett
Related posts from Wild Garden