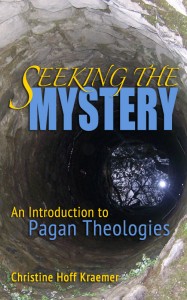 As I mentioned before, I had the opportunity to work with other religious leaders at a workshop in Connecticut in June.  At that workshop, I had the chance and the honor to represent Paganism, as best as any individual can, not only in casual conversations but also in giving a presentation to attendees relating to what our religious community is all about.

I’d given this sort of talk before.  We might be more numerous than we were in the past, and our varied interests in interfaith work tend to make us perhaps a little more common in such circles than in the public at large, but the average person still lacks an understanding of Paganism.  In fact, I’d probably say that even some of the average Pagans you meet lack an understanding of the breadth within our community, especially if they haven’t had the opportunity to meet with or work with Pagans outside of their tradition or local group.  But, I digress.

In the past, when giving these sorts of presentations, I usually let the audience direct things.  I’d give a very brief introduction to myself and cover some of the groundwork for Paganism (polytheism, immanence, virtue ethics, etc.) but then fairly quickly open the floor for questions.  What this usually means is that I’d get a bunch of questions about magic and spells; usually, the Satan Question would come up, too.  But, I would often leave the presentation feeling as if we’d talked a lot but not really about what matters with respect to our community.

Armed with Seeking the Mystery: An Introduction to Pagan Theologies by our own managing editor Christine Hoff Kraemer, that was no longer a problem.

When it was released in Kindle format, I purchased it immediately.  I knew that I had an upcoming presentation on Paganism to give, and I knew it was going to be to other religious leaders in their communities.  I had to bring my A-game and I felt like I needed to hone my own understanding of things in a more rigorous way.  I dove into the book reading it from cover to cover (or whatever you read from and to with a Kindle) and found it to be both extremely informative and extremely easy to understand.

From an interfaith point of view, it’s an invaluable resource.  Christine covers quite a bit in the five chapters that make up the book but one of the most important sections, for my presentation and I think for members of interfaith communities, comes right at the beginning in the introduction.  There, she identifies nine commonalities between our various Pagan traditions.  She’s careful to indicate that a group of people having these traits may not be Pagan and, in fact, Pagans might not have all nine of them, but that as these behaviors emerge from within a community, it becomes more and more likely that it may be Pagan.

This is no small thing.  How many times have you had to begin a conversation about Paganism by discussing what we are not?  Peter Dybing–activist, representative of the Covenant of the Goddess, former president of the Officers of Avalon–has written on this as has HecateDemeter as a question of framing.  We often find ourselves, or at least I have found myself, talking about what we are not.

In the introduction to her book, Christine provides an excellent framework to begin discussing what we are.

Of course, she’s not the first person to do so, but hers is the first book I encountered that is not simply written as a Paganism 101 book targeted at Pagans.  Plus, she is able to take things beyond the how-to instructions relating to specific spiritual technologies and takes us into the theological grounding and background for those practices.  As a result, Christine’s book is not only extremely educational with respect to teaching ourselves about our own diversity, but it’s an excellent resource to suggest to non-Pagans if they want to know more…  Especially if those non-Pagans are not interested in actually becoming a part of our community, and only want to know what it is that we’re all about.

Usually, if I even have PowerPoint slides to use during one of my intro-to-Paganism lectures, I delete them when I’m done.  I never felt they were worth saving, because they were so basic as to be easily re-created the next time I needed them.  After my presentation at Hartford Seminar’s workshop, I kept the slides I had created.  Not only that, the audience requested copies of them and many of the other religious leaders there congratulated me on a job well done.

Fact of the matter is:  I couldn’t have done it as well without this book. 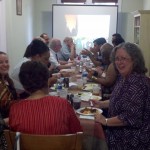 July 11, 2013 Pre-Ramadan Dinner With Friends
Recent Comments
0 | Leave a Comment
"I do not know how I have not seen this article before. Wonderful to read ..."
Donna Donovan Interfaith in Prison
"David - I am not totally sure if you are the same David who said ..."
T B Interfaith as a Pagan: Assumptions
"Wow - powerful story, Sage. Thank you."
Holli Emore Blood Feud
"On the subject of cutting things out of one's life without understanding how they are ..."
Sage Blackthorn Blood Feud
Browse Our Archives
Related posts from Wild Garden